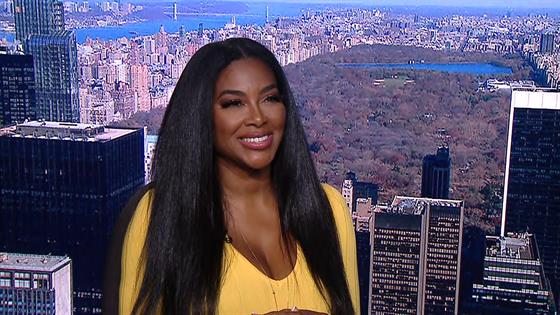 There are only some things only Real Housewives can give TV viewers. Like what, you ask? Oh, how about a woman crashing another woman’s wig launch with a marching band and her own hair products? Yeah, that. It all happens in the Sunday, Dec. 8 episode of The Real Housewives of Atlanta thanks to Kenya Moore (the GIF and gift that keeps on giving).

Marlo Hampton assembled the ladies of RHOA for her wig launch and tasked NeNe Leakes and Porsha Williams to snatch a wig, put it on a model and achieve the best flat iron curl. As the ladies finish up the competition (Marlo announced Porsha won), in Kenya marches—literally—with her own group promoting Kenya Moore Haircare.

“The hell is this?” Marlo asks.

The hell is this indeed. Do we have another iconic moment on our hands?

“This is absolutely insane,” Porsha says in a preview.

Kenya told E! News coming up viewers should expect to see her hard at work and raising her daughter.

“Honestly, I am kicking ass as a CEO mom and I have this amazing haircare line that’s in 2,200 stores—Kenya Moore Haircare at Sally Beauty—so I’m excited they can see that I’m a real boss,” Kenya said at BravoCon.

But don’t expect to see her make amends with NeNe. The two have been battling it out in public and on the show, and to navigate that on the show, Kenya said she just keeps it honest.

“I just keep it really. I think the fans really appreciate that I keep it real, that I just tell the truth. It’s just what it is. I’m not trying to steer people in any direction… It’s unfortunate that for someone that I’ve rooted for in the past, you can pull up plenty of interviews where when Nene was gone, I would say she’s missed she has fans on the show, she definitely should have a place there. I’ve always been supported, but clearly she’s never been supportive of me in that way,” Kenya said.

Real Housewives reunions can sometimes heal (and reopen) old wounds, but Kenya said she’s “doubtful” anything will happen there to repair the relationship with NeNe.

The Real Housewives of Atlanta airs Sundays, 8 p.m. on Bravo.

(E! and Bravo are both part of the NBCUniversal family.)