We never saw it coming — and neither, it seemed, did he. Read on, Yellowstone fans, and we’ll go over not only the death that sets up a fascinating complication for Season 5 but Jamie’s faint hope of beating John, Beth’s master plan to shut down the airport and the big changes that are afoot at Kayce and Monica’s place. 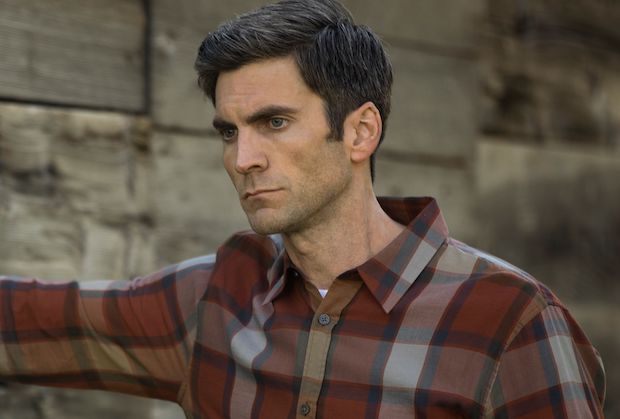 ‘I HAVE FIVE SHIRTS AND A PAIR OF BOOTS, BETH’ | After a prologue meant to ensure that we all knew just how brutal prequel 1883 was gonna be — pretty damn, it turned out — “No Kindness for the Coward” joined Jamie’s pity party already in progress. He didn’t know how he could possibly win an election against John — but Garrett and Christina did. First, Jamie would tell the world about his biological father so that they could control the narrative of his mother’s “death.” Then Jamie would simply call John’s bluff. Christina rightly deduced that John wasn’t so much running for governor as running to keep Jamie from doing so. If Jamie pulled out of the race, John would pick a replacement candidate faster than Beth could come up with her next insult. So Jamie wasn’t going to quit. Instead, he was to call a meeting with John to decide what in both of their colorful pasts was off limits. Of course, that was easier said than done. When Jamie phoned, John refused to get together at a neutral site. “You know where the ranch is,” said John. “Come by whenever.” 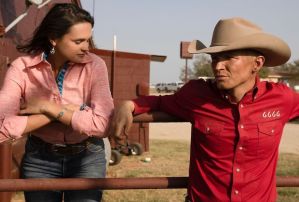 Meanwhile, watching news footage of Summer’s fairly massive protest at Market Equities’ construction site, Caroline wanted the lot of them arrested. “This is not a protest,” she marveled, “it’s an occupation.” Beth advised that if her boss took that approach, she ran the risk of making national news. Instead, what Caroline should do is kick the press off their private property, then have the police remove the protesters as violently as they liked. Delivering the order to vamoose herself, Beth took aside a reporter named Leslie and promised to give her a heads-up when there would be something worth filming. Why would Beth do that? “Let’s just say I’m a concerned citizen,” she replied, adding, “I wouldn’t unpack the truck if you know what I mean.” As all this was going on, down at the Four Sixes in Texas, Emily adorably insisted on collecting that dinner that Jimmy’d promised to buy her. Perhaps not surprisingly after she got a gander at him washing up in the altogether, their date ended with a kiss. Then another kiss. Then Katie, bar the door, clothes were flying off in every direction. Mia who? 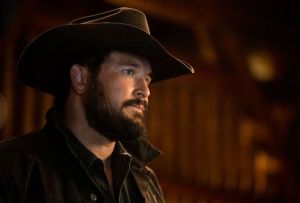 ‘CAN I STILL HAVE CAKE AFTER DINNER?’ | That evening, Rip and Carter joined John and Beth for dinner at the big table for the first time. It did not go well. At least not at first. “There’s fruit in the salad,” noted Rip, chagrined. “It’s good for the prostate,” Beth explained, then launched into a whole potty-mouthed spiel about the holistic healer she recommended who focuses on the erogenous zones. “Are we still talking about the salad?” asked Carter. (Priceless.) When John grumbled that Beth behaved that way at every meal, she got mad enough to stomp off, at which point Rip followed and got to the root of the problem: She hated that table that represented a happy family that had never existed. So why not eat somewhere else? he suggested. With that, they moved into the den and had a lovely dinner punctuated by talk of the largest snake John had even seen. Heck, he even gave the tail to Carter. In that sweet moment, it would not have been possible for Beth to love Rip more than she did. “Life is plenty hard,” he told her. “You don’t need to help it, ya hear me?” Honestly, in that moment, would it have been possible for any of us to love Rip more? 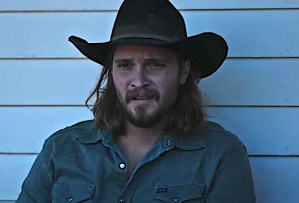 Over at Kayce and Monica’s new place, he was started to see a wolf — and called Mo to tell him as much. Don’t shoot it, said Rainwater’s right-hand man. Even if it heads for the horses? If it heads for the horses, Mo explained, it’s a test. If Kayce shot it, he’d fail. OK, then. Inside, Tate didn’t want to get out of the tub with Mom in the bathroom. “Things down there are not the same,” he said. Ah, it seemed like only yesterday that Monica was bathing him. Oh, wait — it actually was only yesterday. Anyway, Kayce assured his wife that since the boy had grown up on a ranch, they didn’t need to have “the talk.” When Tate was 16, Kayce would tell him not to have sex, and he’d still go and fall in love and do it till he and some girl broke up or he got her pregnant. Maybe they needed the talk, Monica joked — she was pregnant. Upon hearing the news, Tate cracked, “I knew those weren’t naps you were taking — ew.” 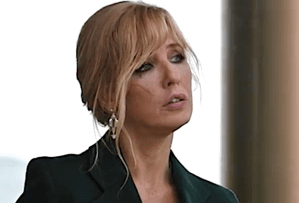 ‘TIME TO TAKE ONE FOR THE TEAM’ | That night, at Market Equities’ worksite, Summer had just snuck off to pee when she saw cops in riot gear approaching. “They’re here,” she said upon calling Beth. All according to plan. In no time, all hell had broken loose. Summer even got bashed upside the head with a billy club — and, thanks to Beth, Leslie’s crew was there to get the whole thing on tape. The morning after, Caroline and Ellis couldn’t guess how the news crew had known to stick around. It rhymes with “death,” guys. “Breath.” It’s Beth, you nimrods! Sigh. At the moment, the narrative was in ME’s favor, owing to Summer’s recent arrest at the Livestock Commission office. But “if this goes national,” Caroline knew, “the narrative will be flipped.” Cut to: Beth phoning the New York Times with a tip. “What are you up to, sweetheart?” asked John. “What you asked, Daddy.” 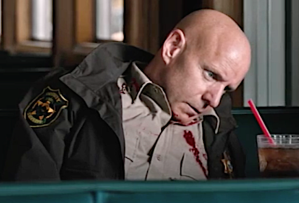 Later, John took Rip with him as he went to meet Sheriff Haskell to see about shortening Riggins’ lifespan. Though that seemed kinda pointless, ultimately, since John never got the information that he’d had Jamie question Riggins to obtain; he only knew that the inmate was the middleman who’d ordered the hit, not who’d ordered him to order it. (Got all that?) Anyway, when John and Rip showed up at a diner to sit down with Haskell, they deduced from the way that everyone was staring at each other, not eating, that a holdup was in progress. So they went back to the truck and “drove away,” allowing John to sneak in the back and Rip to cause a distraction in front. A nanosecond later, bullets were flying, people were screaming, Rip was dragging one of the robbers through a smashed window, and another was making a human shield of a waitress. John and Rip’s solution? Rip shot the guy in the foot, and when he reacted, John finished him off. As for Haskell, he was full of more lead than hash browns. It was so bad that before he could say goodbye to his daughter on the phone, that was it. He was gone.

Which is kinda an interesting problem for John, right? What will he do without his buddy in charge of law enforcement next season? What do you think? Will Kayce have to become sheriff? Ryan? And why is John trying to get Riggins killed before finding out who placed the order to kill him? Hit the comments with your thoughts, theories and reviews of “No Kindness for the Coward.”