Kelsey Grammer is receiving rave reviews for his role in “The Space Between,” which landed on digital streaming platforms on June 15 following its theatrical run. Grammer acted alongside Paris Jackson, who is also in the film. While this was the pair’s first time working together, it was not the first time the two have met. In fact, Grammer became emotional recalling the first interaction he had with Paris when she was just a child.

“I was checking into the Waldorf and there was Michael [Jackson]. He was recording something. It was just the sweetest moment. He stopped to say hello. We sort of shook hands and he had his little mask on but then she said, ‘Daddy,'” Grammer revealed in an interview with “Extra” (per People). The actor reportedly teared up as he continued to explain, “He just took her in his arms and said, ‘Oh, hello, little one.’ She was so lovely and it was just beautiful. She was the cutest thing and she is still pretty darn cute.”

Grammer also discussed Michael Jackson’s handling of the paparazzi. “Boy, they went after him, took shots at him all the time, and I thought, ‘How the hell do you handle that?'” he said. “I’ve had my share.” As it turns out, Paris has been open about how the paparazzi following her father around when she was a child has impacted her life today. Read on to find out how it’s affected her.

Paris Jackson admits she suffers from PTSD from the paparazzi 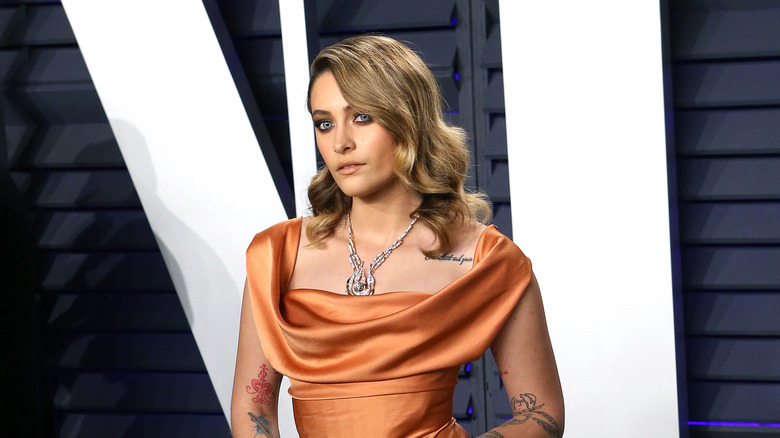 We all recall how Michael Jackson would attempt to conceal his children from the paparazzi when they were young children by putting masks over their faces. Well, it appears that Paris Jackson, who is now 23, is still suffering from the trauma of the paparazzi. “I experience auditory hallucinations sometimes with camera clicks and severe paranoia and have been going to therapy for a lot of things, but that included,” Jackson told Jada Pinkett Smith on her Facebook Watch series “Red Table Talk,” per People. “I think it’s standard PTSD.”

Paris had previously discussed her PTSD diagnosis when talking about the allegedly abusive boarding school both she and Paris Hilton attended as kids. She wrote on her Instagram Story back in October of 2020 (per People), “As a girl who also went to a behavior modification ‘boarding school’ for almost two years as a teenager, and has since been diagnosed with PTSD because of it, and continue to have nightmares and trust issues, I stand with @ParisHilton and the other survivors.”

Paris is not only acting in movies, but following in her late father’s footsteps by making a name for herself in the music industry as well. She recently released her first solo song, “Let Down.”

If you or someone you know is struggling with mental health, please contact the Crisis Text Line by texting HOME to 741741, call the National Alliance on Mental Illness helpline at 1-800-950-NAMI (6264), or visit the National Institute of Mental Health website.