This article contains spoilers for the movie “Spider-Man: Far From Home.”

He drove Spider-Man into therapy. He manipulated Wolverine into committing a mutant massacre. He convinced Daredevil that a little girl was the Antichrist. Now the mind-manipulating supervillain Mysterio is making his big screen debut in Marvel’s latest film, “Spider-Man: Far From Home,” with Jake Gyllenhaal taking on the role.

A master of illusion and psychological intrigue, Mysterio is known among comic book fans as one of Spider-Man’s greatest foes. In “Far From Home,” he poses as a warrior from another universe determined to eradicate the threat of giant monsters called Elementals. But Mysterio is not quite what he appears to be, and his true intentions are more nefarious.

While this new Mysterio has Gyllenhaal’s chiseled looks, his fashion sense remains unchanged, including the green spacesuit, purple cape and fishbowl helmet that first appeared when the character made his comic book debut in 1964. So who is Mysterio? And what’s up with that helmet?

The Menace of Mysterio

Mysterio was first introduced in “The Amazing Spider-Man” No. 13. Created by Stan Lee and Steve Ditko, Mysterio is the alter ego of Quentin Beck, a stunt man and special effects artist who becomes frustrated after his efforts to make it as a leading man in Hollywood tank. A more sensible mind might consider a career as a magician; Beck instead decides on a life of crime and never looks back.

Unlike other supervillains, Beck lacks any super powers of his own. Instead, he relies on his intelligence, stunt training and technical skills to take on his enemies, employing disguises, props and visual tricks to hypnotize, confuse and manipulate. His helmet looks wacky, but it can project three-dimensional illusions and insulate him from the chemical gases he uses to disorient and weaken his opponents. 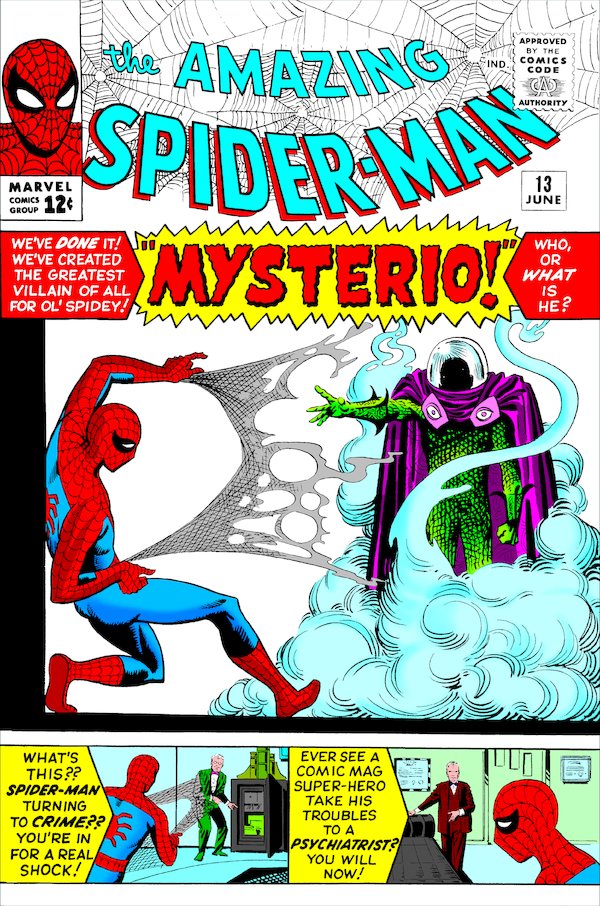 In his initial comic appearance, Beck wears a Spider-Man costume to commit a series of robberies and turn the public against the web-slinger. Shortly thereafter, Beck appears for the first time as Mysterio and promises to rid New York of the “menace of Spider-Man,” winning the public’s admiration in the process. The plot almost succeeds (the city even throws Mysterio a parade down Fifth Avenue), but Spider-Man eventually exposes Mysterio and gets him carted off to jail. From that point on, Mysterio becomes hellbent on revenge.

The Method to His Madness

For Mysterio, it isn’t enough to defeat his enemies in battle; he wants to psychologically crush them. On multiple occasions, Mysterio convinces Spider-Man he is suffering from schizophrenia and multiple personality disorder, leading Spider-Man to seek out the help of a psychiatrist while in full costume. (In one instance, Mysterio poses as Spidey’s shrink.)

Other deceptions include an attempt to fake the death of Spider Man’s Aunt May; a trick that convinces Spider-Man to see himself as only 6 inches tall; and an elaborate illusion of a zombie pirate attack. If nothing else, Mysterio is creative.

Mysterio is also an original member of the Sinister Six, a group of Spider-Man’s enemies that occasionally bands together to try to take him down. Introduced in “The Amazing Spider-Man Annual” No. 1 in 1964, the original Sinister Six includes five villains who have appeared in Spider-Man films: Sandman, Vulture, Electro, Doctor Octopus and Mysterio (maybe next time, Kraven the Hunter). Members have come and gone as they are incarcerated, killed or resurrected, but Mysterio has maintained a fairly steady presence on the roster.

A Sinister Six film was planned for release after “The Amazing Spider-Man 2” (2014), but Marvel canceled the project after Spider-Man’s cinematic reboot in “Captain America: Civil War” (2016).

Although Mysterio is most closely associated with Spider-Man, he has also battled other superheroes. In the eight-issue “Guardian Devil” story arc of the “Daredevil” comics, published in late ’90s and written by the “Clerks” director, Kevin Smith, Mysterio targets Daredevil with an elaborate psychological plot: As if the mood-altering drugs weren’t enough, it also involves demonic possession, the birth of the Antichrist and a hit man who murders Daredevil’s longtime love interest, Karen Page. Mysterio killed himself after receiving a diagnosis of terminal cancer, caused by the radiation emitted by his suit, but he has since returned.

In “Old Man Logan,” a 2008-9 story arc from the “Wolverine” comics, Mysterio successfully tricks the X-Man Wolverine into murdering all of the other X-Men by making him think that they are all supervillains attacking their home. The series was later an inspiration for the 2017 film “Logan,” but the Mysterio plotline was left on the cutting room floor.

Now, after seven live-action “Spider-Man” movies, Mysterio is starring in a summer blockbuster. Beck is finally getting the A-list treatment he always wanted.