He supports gay rights, voluntary euthanasia and decriminalising illicit drug use. He's a father of four whose messy divorce became tabloid fodder. He's even been accused of inflaming racial tensions. 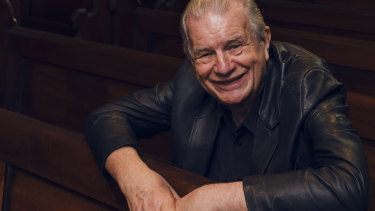 "People often ask me, 'Are you really a minister?'" says Reverend Bill Crews, whose Sunday night program attracts more than a quarter of Sydney's radio audience. "If they don't know my show, they assume it'll be a church service with hymns; that I'll be pouring conservative Christian ideology down their throats."

In fact, Crews opens each broadcast with a quote from the Islamic poet Rumi: "Come, come, whoever you are … it doesn't matter." Recent guests include a musical theatre star, a union leader and a psychologist – but current members of parliament are banned, lest they pollute the airwaves with scripted talking points. When the show launched in 2002, he had two friends at the helm: atheist Brian Carlton, who gave him a crash course in radio, and gay man Jason Kerr, who remains his producer to this day. (Crews began campaigning for marriage equality more than two decades ago.)

His audience includes people of all faiths and none. "But I never ask the callers to tell me," he says. "Why does it matter?"

In many ways, Crews is the the opposite of his high-profile colleagues at 2GB. While they negotiate multi-million contracts, like Ray Hadley who has reportedly signed a $24 million deal over six years, he gets a standard casual rate – the equivalent of a fill-in presenter. Instead of blaming gamblers for their addiction, he puts the onus on poker machine venues and governments. He supports refugees and opposes the school chaplaincy program.

When people are abused, you have to give them a voice.

"But I've never been censored," he insists. "I just say what I think."

As a young man, Crews worked as an engineer for electronics manufacturer AWA while volunteering at the Wayside Chapel in Kings Cross. His "calling" came out of the blue. "It wasn't a voice but a 'knowing'; I just knew I had to quit my job and work here." 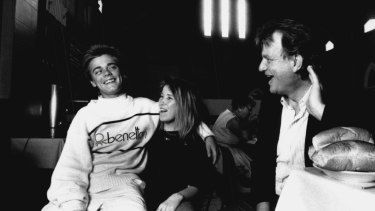 Crews in 1991 with homeless teens Wayne, 14 and Mell, 16 at the Exodus restaurant in Ashfield.Credit:Ben Rushton

In 1986, he was ordained as the minister of Ashfield's Uniting Church, where he established the Exodus Foundation. Now, Exodus feeds up to 1000 people in need every day in its Loaves and Fishes restaurant. (Crews' friend, multimillionaire ad man John Singleton, came up with the catchy name –much better than a dreary "soup kitchen" – and helped fund the project.) It also offers free medical and dental services.

"When I got the calling, I also got a sense there could be some turmoil in my private life," he says, though he doesn't want to rake over his divorce. 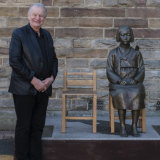 Crews was criticised over this memorial to the so-called ‘comfort women’ of World War II. ‘It was the right thing to do,’ he says.Credit:James Brickwood

"We’re all born wounded and we're all limping along this road called life. If we can link arms with someone for a while, then maybe we can support each other."

Not that he shies away from controversy. A few years ago, he installed a bronze statue at Ashfield: a memorial to the so-called "comfort women" who were kidnapped and raped by Japanese military in World War II. The Australia-Japan Community Network lodged a complaint against the Church under Section 18C of the Racial Discrimination Act, claiming the statue would encourage "racial bullying" of Japanese people in Sydney.

The complaint was dismissed.

"When people are abused and they have no voice, you have to give them a voice," Crews says.
"[Erecting the memorial] was the right thing to do."

Last year, two homeless men sat down for dinner at Loaves and Fishes. After the first man finished, he removed his false teeth and gave them to his friend so that he could eat, too.

"Everyone is inherently deserving of respect and compassion and the way the world is at the moment, there's not a lot of that around," Crews says. "The way to exhibit that is to work with the poorest of the poor and the most marginalised."

Sunday Night Crews airs 9pm each week on 2GB.
*Nine, the owner of this masthead, has a majority stake in Macquarie Media, owner of 2GB.