Mila Kunis and Ashton Kutcher are one of the cutest and most relatable couples in Hollywood. The two first met on the set of “That ’70s Show” in 1998, per Insider, where they played boyfriend and girlfriend. Though the two weren’t close with each other during filming, Kunis revealed that she actually had a crush on Kutcher and was nervous about giving him her first on-screen kiss. “I was like, ‘Oh, he’s so cute, it’s the Calvin Klein model!'” she told People in 2001. “Then I was like, ‘I have to kiss him?’ I was so nervous and uncomfortable. I had the biggest crush on him.”

Luckily for Kunis, Kutcher made the experience an easy one, as she told the outlet that he “was so nice,” and “just made jokes and gave me funny little compliments.” Their on-screen kiss ended up as a full-circle moment when Kunis and Kutcher had their first official (off-screen) kiss in 2012 after they started dating, per Elle. The couple got married in 2015 and share two young children together!

As many celebrity parents know, taking care of children is a full-time job, and Kunis could not have made that point clearer to her husband after he proposed a (literally) out-of-this-world trip to her. Find out what Kunis talked Kutcher out of doing below.

Mila Kunis does not want Ashton Kutcher to go to space 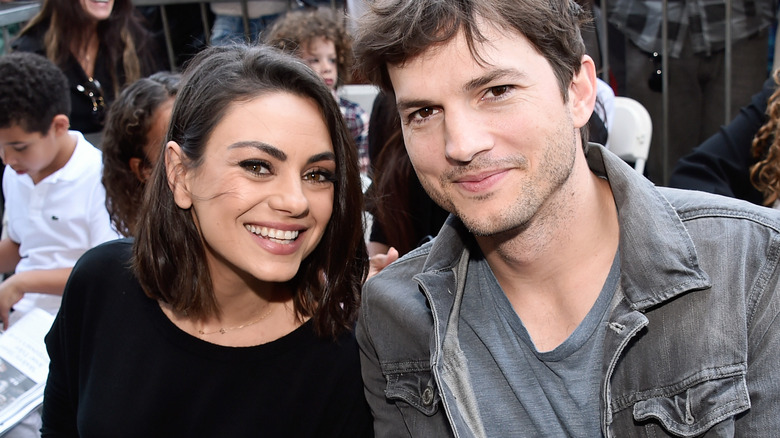 As a technology and Silicon Valley enthusiast, Ashton Kutcher wanted to join billionaire Richard Branson on his next mission into space via his Virgin Galactic ship, but Mila Kunis was not having it. According to Cheddar News, Kutcher was on a list of 600 people to board a flight to space via Virgin Galactic, but alas, he had to sell his ticket. “When I got married and had kids, my wife basically encouraged that it was not a smart family decision to be heading into space when we have young children, so I ended up selling my ticket back to Virgin Galactic,” Kutcher told Cheddar News in an interview on July 14. “I was supposed to be on the next flight, but I will not be on the next flight.” Still, Kutcher is holding out hope that he’ll blast off in the future. “But at some point I’m going to space,” he bluntly added.

That being said, the final frontier is still a no-go for Kunis, as she not only didn’t appear in the video with Cheddar News, but generally seems more into going on trips with their children like they’ve done in the past. “My husband and I always backpack through Europe,” Kunis told The Telegraph in 2015 (via PopSugar). “We can just pick up and go.” That seems like a more “down-to-earth” option!