Sometimes it’s better to be lucky AND good 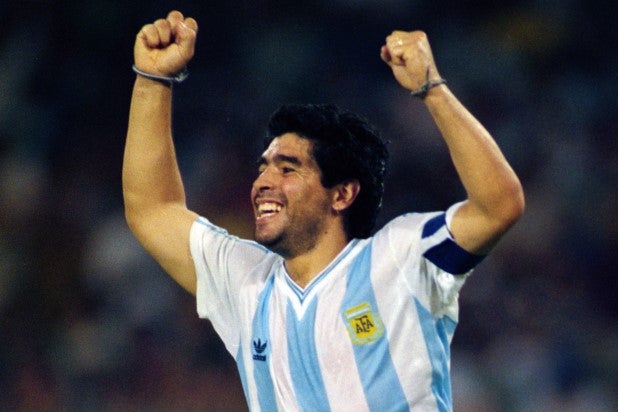 Soccer legend Diego Maradona died at age 60 Wednesday, a week after undergoing surgery for a blood clot in his brain. The Argentinian soccer start was remembered by his fellow players, coaches and fans after news of his passing spread.

Maradona began his soccer career at age eight, when he was noticed by a talent scout and joined the Argentinian junior league Los Cobollitas (yes, that translates to “Little Onions” in English). Maradona made his official professional debut at age 15 and it wasn’t long before Maradona captivated his hometown — and later, the world — with his dazzling control of a ball and relentless pursuit of goals as both a striker and attacking midfielder for Napoli and the Argentinian National Team.

Take a look below at some of Maradona’s best moments throughout his 44-year professional soccer career.

The 1986 World Cup “Hand of God” Goal
Arguably Maradona’s most memorable — and controversial — play in his entire career. During the 1986 World Cup Maradona scored both goals to cement Argentina’s 2-1 final lead against England, one of which was basically a handball. Maradona went for a header but also appears to strike the ball with the back of his hand before it slipped past the keeper, which would typically disqualify the goal altogether. But a lack of instant replay made it hard for the referees on the pitch to verify the handball, and ultimately Maradona was granted the point. In an interview after the fact, Maradona cheekily said when asked about the goal that he scored “a little with the head of Maradona and a little with the hand of God.”

The 1986 “Goal of the Century”
Maradona was on fire during the 1986 World Cup, and moments after landing the “Hand of God” goal he scored another which was later determined to be the greatest goal in World Cup history by FIFA. In a show of his trademark touch and impeccable control of the field, Maradona took the ball from his half of the pitch more than halfway down the field — passing five of England’s defenders — before cleanly faking out English keeper Peter Shilton and sending the ball into the net. While it devastated England, the goal was remarkable and eventually made the Channel 4 list of top 100 Greatest Sporting Moments.

That Time Maradona’s (Alleged) Cocaine Assistant Helped Him Celebrate
Many in Maradona’s camp still say he was simply using “smelling salts,” but in an exhibition match — that’s right, essentially a friendly bout — following the 1986 World Cup, Maradona cleanly drills a penalty kick into the right corner of the goal. What follows is the typical on-the-field celebration, but with an added twist: a team assistant runs on from the sidelines with a baggie that Maradona promptly face-plants in. It’s not clear that this is cocaine, but Maradona was known to publicly use the drug throughout his stardom (see his controversial 1994 World Cup goal celebration).

The “Divine Free Kick” in 1984 While Playing for Napoli
Italians came to call this impeccably landed free-kick from Maradona “divine,” which is an appropriate word for his blistering dedication to putting penalty balls in the net. While playing against Juventus, Maradona managed the ball past an impossibly close wall of Juventus defenders — and rumor has it, he told teammates “don’t worry, I’ll score anyway” right before landing the goal.