Stephen Tompkinson appeared via video link on Wednesday’s Good Morning Britain to talk to hosts Ben Shephard and Susanna Reid about his new dementia campaign. The actor, who is best known for his roles in Wild at Heart and Ballykissangel donned a long head of locks instead of his usual short, cropped hairstyle, fans are used to.

Taking to Twitter after the interview, viewers couldn’t get over Stephen’s new look as one tweeted: “#GMB omg, Stephen??? Unrecognisable.”

Another commented: “Wow…I would not have recognised him at all without the introduction #GMB.”

A third added: “Stephen Tompkinson looks different to what I remember #gmb.”

“I appreciate that people physically age, but Stephen has literally turned into a pensioner since last night! #gmb,” a fourth viewer said.

Another viewer pointed out: “That is not the Stephen Tompkinson I’m used to #GMB And I thought my lockdown hair was bad #GMB.” 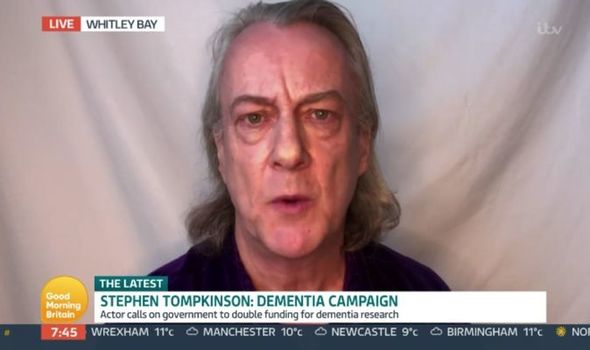