In a companyblog post, Twitter outlined its long-awaited rules about what constitutes hateful conduct on the platform, informed by feedback it sourced from over 8,000 users across 30 countries. Twitter’s rules will emphasize religion as a critical category. 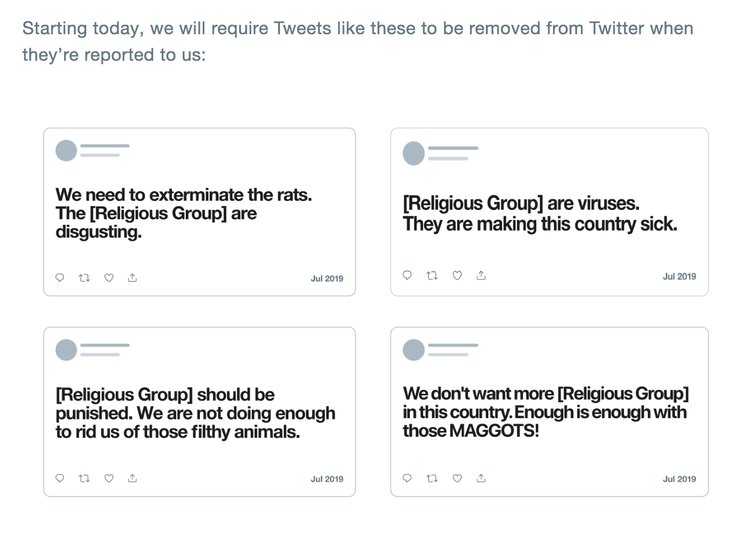 That’s because the platform wants to combat speech that leads to real-world harm, and it cited research that found an increased physical risk for groups targeted on social media because of their religion. The platform pledged to remove violative tweets both retroactively and going forward, and to further investigate the responsible accounts.

Here’s what it means: After a lot of talk, Twitter is acting on its promise to create a healthier platform, and it’s leaning on user opinion to do so.

Platforms are increasingly adopting this strategy — giving users more say around what is and isn’t allowed on platforms — as Silicon Valley giants face increased scrutiny around content. For example, just this week Instagramimplemented two new features meant to empower users in the fight against bullying on the app.

Users typing out a harmful comment will now be prompted to reconsider their choice before posting, and users will also have the option to secretly restrict access to their profiles without those being limited knowing. In that instance, the account owner would have to approve a comment on a post of a certain user (who may have written inappropriate or hurtful comments in the past) before the post became public. In a similar way, Twitter’s effort prioritized user opinion, albeit at a broader scale: The survey directly informed its new policy, and was likely fielded only because of pressure from users to clean up their platform.

The bigger picture: While Twitter’s new rules could ease pressure from critics who feel it’s done too little to combat harmful speech, they might also reignite backlash from groups that already think the platform is too censorious.

Twitter’s new rules are an important step forward, but their enforcement will bring about its own set of challenges. Not only is it incredibly difficult to ensure that all harmful tweets are flagged and taken down, but it’s difficult to toe the line between justified removal and censorship, especially on a platform where satirical accounts are prolific.

Additionally, Twitter — like other social platforms — has faced backlash for an allegedanti-conservative bias over the past year. Certain groups have argued that their tweets come under heavier scrutiny and are more likely to be removed because their opinions oppose those held by Silicon Valley execs.

If individuals within these groups find themselves on the receiving end of investigations enabled by these new rules, it’s possible that they would become more vocal in their criticism of alleged censorship. That might be especially likely right now, given today’s “Presidential Social Media Summit,” where prominent conservatives will meet to discuss the bias they’ve allegedly experienced on platforms — more on that later in the briefing.

Twitter has tried to combat allegations of restrictiveness by taking middle-of-the-road measures on other content moderation issues, and we expect them to maintain that approach in general. For example, Twitter recently instituted arule that tweets from politicians, verified users, and account holders with more than 100,000 followers would remain on the site, even if deemed harmful by community guidelines.

But if those tweets are marked as harmful, users will have to verify that they want to see the tweet’s content before the text displays. That’s because the platform believes the opinions of prominent individuals, like President Trump, are important to public discourse, but that Twitter still has an obligation to protect users from their harmful speech.

As it attempts to navigate over 350 million users and 43 languages, the platform will no doubt experience additional scandals and backlash, no matter how much it pushes to occupy the middle ground on issues of content moderation.