Jeremy Vine was back on Channel 5 this morning for the final instalment of the week and joining him in the studio was former Gogglebox star Dom Parker, journalist Nina Mishcov as well as Brexit Party MEP Dr David Bull.

Between the four of them, they were intensely debating the latest news surrounding the royal family and in particular The Duke and Duchess of Sussex.

After chatting about the media coverage Meghan Markle had received in comparison to Kate Middleton yesterday, conversation quickly turned to the supposed “war” between the two brothers.

David was keen to find out who was responsible for the image portrayals the Duchess’ were receiving and asked his co-panelist Nina: “Why, do you think the palace is actually trying to control this?”

“Well that almost is the palace though!” host Jeremy commented in reference to Prince Harry being the future King of the palace.

“Oh gosh,” those watching at home heard Jeremy groan. “If you’re Meghan and Harry, you ring William’s PR person and you say ‘can we lure you over, we’ll double your money’.

“And then you can start trashing him instead!” he joked. 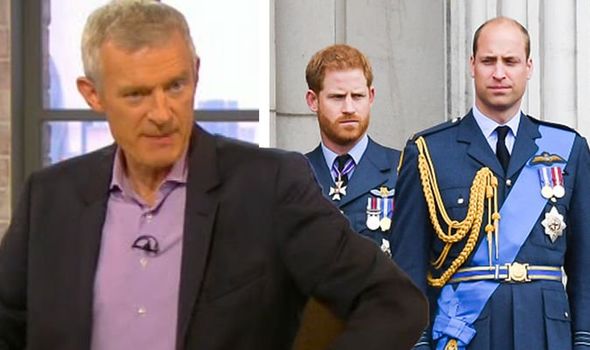 It comes after the two brothers split from the Royal Foundation charity they set up together back in 2009.

Instead, they decided to embark on separate projects with their wives.

Whereas Meghan and Harry plan to launch their own charitable organisation by the end of this year called Sussex Royal The Foundation of the Duke and Duchess of Sussex, or simply Sussex Royal.

A Buckingham Palace source told Scobie the new organisation will “allow the Sussexes to do things exactly how they want”.

Royal author Juliet Reiden commented on the split and said: “This is Prince Harry and Prince William going their separate way with their wives – they’re almost setting up two separate courts.”

Elsewhere on the Jeremy Vine show, David lashed out after claims were made regarding Leave votes being lied to.

The doctor wasted no time in correcting Nina when she suggested “people did not know what they were voting for”.

The clash got so heated, Jeremy was forced to step in and calm things down.

Jeremy Vine airs weekday mornings at 9.30am on Channel 5.