“Thunder Force” is nearly half over before the action-comedy lands on a real joke: the introduction of co-star Jason Bateman as a half-superhero mutant with crab arms instead of human appendages. Jokes aside, Bateman’s “The Crab” also makes for a good foil to the eponymous Thunder Force, a pair of unexpected crime fighters who have emerged to battle the supervillain crime wave that has consumed the world since their childhood. They need all the help (or hurt) they can get.

Melissa McCarthy as lovable loser Lydia (AKA The Hammer) and Octavia Spencer as her super-smart former BFF Emily (AKA Bingo) are only on their first mission when they meet The Crab, and their do-gooding is soon upended by the career criminals they’re intent on stopping. And then, suddenly, weirdly, Lydia and The Crab connect, kicking off a dream sequence in which these two outsiders dance and twirl and spin to the dulcet tones of Glenn Frey’s “You Belong to the City.”

It’s the strangest thing in “Thunder Force.” It’s also the first moment that director Ben Falcone’s Netflix outing shows any sense of pizzazz or creativity, a silly moment in a silly film that hints at something different than the limp, well-meaning superhero send-up that’s on offer. While McCarthy and Spencer do their damndest to make the family-friendly feature work — McCarthy in particular brings real texture to her charming slacker with a heart of gold, a role she’s played so many times before — “Thunder Force” isn’t clever enough to break new ground in the superhero milieu, nor is it silly enough to mine its material for the kind of jokes that would make it distinctive.

It all opens with a snappy, comic book-styled animation sequence that sets up the world in 1983, when a series of “interstellar cosmic rays” hit the Earth and caused “genetic transformation in a select few.” Unfortunately, the super-power rays only impacted sociopaths (let’s not even try to unpack that throwback take on mental illness). Since then, the world (though we only ever see Chicago; “Thunder Force” has neither the time nor the budget for global ramifications) has become overrun by “Miscreants,” crime-loving freaks with all sorts of powers. 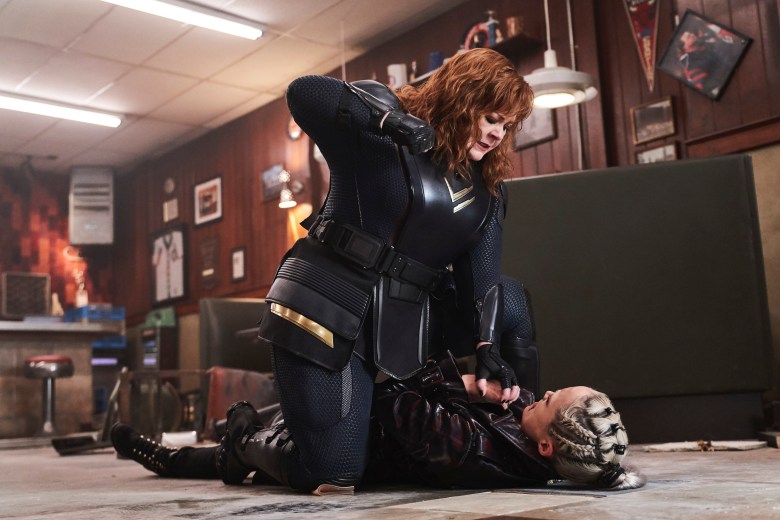 Young Emily (Bria Danielle) has a particular disdain for the Miscreants: They killed her geneticist parents, who were trying to find a way to help turn regular people become superheroes (who could then fight the Miscreants). It’s her life’s mission to stop them, and she’s got the brains to do it. After the tragedy, Emily moves in with her grandma (Marcella Lowery) and lands at a school where she befriends Lydia (charmingly played by Falcone and McCarthy’s own daughter, Vivian Falcone), a sweet slacker with a strong altruistic streak. Through high school, mismatched Lydia and Emily remain rock solid, until a well-intentioned Lydia accidentally upends Emily’s academic dreams, and the pair fall out.

Cut to present day and the Miscreants are still tearing up the world, Lydia has never gotten over losing her best friend, and Emily is a famous scientist on the cusp of a breakthrough. A series of contrivances — Falcone’s script never hesitates to embrace an incomprehensible coincidence — reunite the duo and finds Lydia injected with a serum designed to either a) kill her or b) gift her with super-strength.

Lydia lives, and soon she’s undergoing a series of increasingly strange and gross training exercises (if you’re averse to raw chicken, be ready to look away). Soon enough, Emily joins her, opting to take the second part of the serum, in hopes of becoming invisible. Being her own guinea pig is a very weird choice for a famous genius like Emily, who is well-known to the world and Chicago in particular, and an even dumber one when the women start fighting crime with no attempt to obscure their identities.

Clearly we’re not meant to pull too hard at the narrative threads of “Thunder Force,” but what are we supposed to do? Falcone is unwilling to embrace his film’s inherent goofiness, settling on a mayoral race subplot led by a shockingly flat Bobby Cannavale. (Of note: How do you make Bobby Cannavale flat?) Audiences will likely forget some of these twists and turns, as Falcone often abandons that story to dabble in long stretches of McCarthy doing Urkel impersonations. These impersonations are funny, of course, and McCarthy also turns in some quite lovely character work here, particularly as she bonds with Emily’s smart daughter (Taylor Mosby). But to what end? 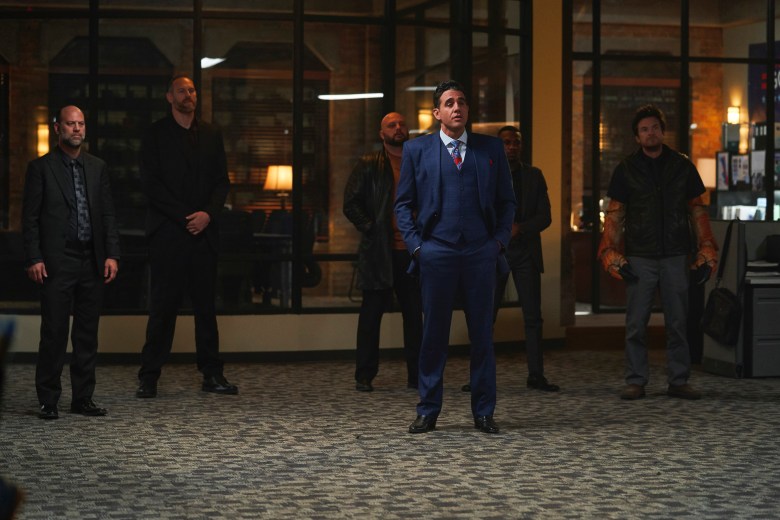 But back to The Crab. This crustacean-obsessed subplot is the film’s funniest recurring gag, but also its most nonsensical — was the crab who bit Bateman’s character also a sociopath, or is this a case of a writer failing to remember the tenets of his narrative setup? Such are the questions inspired by “Thunder Force” that are never, ever answered. Having the time to ponder them in the film’s padded 105-minute running time is a strong indicator that the comedy doesn’t fly fast and furious.