Stranger Things loves to kill people you like. Barb might have singlehandedly started the Stranger Things obsession and I’m still not quite ready to talk about Bob (R.I.P.). Even Billy’s death this season felt tragic after the abuse he’s faced and his attempts to protect his sister and right his wrongs. But in the season three finale, the Duffer Brothers went further than ever before, and did something insanely cruel. Worse than ever before.

During Chief Jim Hopper (David Harbour) and Joyce Byers’ (Winona Ryder) mission to close the rift to the Upside Down, Evil Russian Man shows up to save his country’s nefarious operation. So, Jim and this Arnold Schwarzenegger wannabe face off in an epic fist fight while Joyce attempts to blow up their machine. She succeeds, but Jim doesn’t make it out of the blast.

Que the collective “NOOOOOOOOOOOOOOO.” But here’s the question: would the Duffer Brothers really kill Hopper? Their entire M.O. is to introduce secondary characters you love and invest in, only to rip them from you without apology. But the strange thing about that (sorry), is they do it so carefully you don’t even notice they’ve never actually killed one of their mains. Barb, Bob, and Billy are heroes, but they’re not who you pressed play for. AND THEIR NAMES ALL START WITH “B.”

Don’t worry, there is good news. Here, clues that Hopper didn’t really die on Stranger Things…and not just because his name starts with “J.”

It’s true that another character could have taken possession of the Bronco, but the vehicle didn’t make an appearance in the finale when the Byers family and Eleven packed up to leave town. Plus, I can’t picture the police chief leaving his car to Mike.

Yes, the Demogorgon is back, but that’s not all the final scene of Stranger Things 3 taught us. In some snowy, remote Russian facility, guards are choosing a prisoner to feed their friend from the Upside Down. When one walks towards a door, his companion says, “not the American.”

Who dat? It’s very likely Hopper, considering he “died” inside the Russian’s underground lair of Starcourt Mall, and we never saw a body. 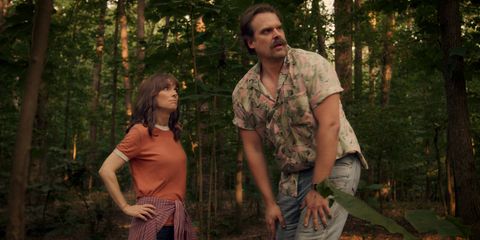 Shout out to Us Weekly for this one. The tabloid points out an important easter egg that may just prove once and for all that Hopper is alive.

Remember back in season one (episode three to be exact), when authorities are pulling a body out of the water that the everyone believes is going to be Will (Noah Schnapp)?

“This may very well be the most emotional episode of the season, and a lot of that has to do with the ending. [Director Shawn Levy] picked that Peter Gabriel cover of David Bowie’s “Heroes” and played it over some of our favorite shots from the show,” the Duffer Brothers told Entertainment Weekly. “When Jonathan hugs Joyce, their bodies silhouetted by the car headlights, and the camera slowly cranes up to reveal distant sirens…it gives us goose bumps every time we watch it.”

Well, guess what song starts playing after El (Millie Bobby Brown) reads her letter from Hopper? You guessed it: “Heroes.” Will wasn’t really dead, so Hopper probably isn’t either. 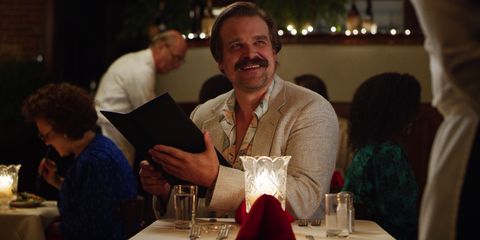 Seemed?! Twice? Seems sus is what it seems.

So here’s the thing, TVLine founder Michael Ausiello revealed that David is contracted through a fourth season of Stranger Things and beyond. Though Netflix has yet to officially announce Stranger Things 4, we all know it’s gonna happen.

Even with his contract, the Duffer Brothers have to option not to keep him on, but still.

Wait. Was Hopper Even There for the Explosion?!

David may be onto something. Was Hopper even next to the machine when it exploded? One fan (who showed up in my DMs) told me to give the explosion scene a re-watch. According to him, Hopper is nowhere to be found. Well, guess what? I did, and here are some very convincing screen grabs.

When Hopper finishes his fight with Evil Russian Man, he gives Joyce a soulful look, a go-ahead if you will, to blow it all up.

Then, resigned to killing her friend (or maybe something more), she closes her eyes.

Here, three screenshots of the explosion that follows. Look closely. It doesn’t seem like anyone is directly next to it, where Hopper was before Joyce pulled the triggers.

These shots are angled from the direction of the rift, so you should be looking for Hopper on the left, not the right. Here is a shot from that same angle BEFORE (note: it’s sparking because Hopper had just thrown Terminator into the machine.) 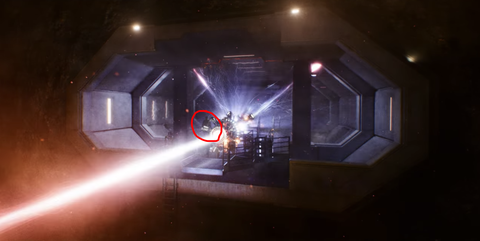 You can clearly see Hopper in that one. Could this be a continuity error? It would be a pretty big one. As for where Hopper could be, perhaps he was pulled (or even jumped) into the Upside Down before the portal closed? I don’t know, I don’t write the show.

If you are in the camp that believes Hopper is “The American,” that would suggest another opening to the Upside Down in Russia, which would make sense, considering they have a Demagorgon. I feel like those don’t travel well.

Would Stranger Things really take another one of Joyce’s love interests and another one of Eleven’s father figures? If so, the way the Duffer Brothers choose to pull at our hearts strings is becoming a little too repetitive. Shake it up. Kill someone important to Mike (Finn Wolfhard) for a change.