*Major spoilers for Shang-Chi and the Legend of the Ten Rings ahead!*

The wait is finally over! Phase four of the Marvel Cinematic Universe takes a turn as we meet Shang-Chi, Katy, Xialing, and more in the latest Marvel movie Shang-Chi and the Legend of the Ten Rings. If you are a hardcore Marvel fan, then you already know to stay put after the films ends for special post-credit scenes. What does Shang-Chi’s post-credits scene mean for the rest of Marvel phase four?

Here’s everything you need to know about the post-credit scenes in Shang-Chi and the Legend of the Ten Rings.

What happened in the Shang-Chi mid-credit scene?

The mid-credit scene kicked off right after the ending of the film. Shang-Chi and Katy are with Wong after stepping through one of his portals. He examines the ten rings, trying to figure out where they came from with some very special guests: Captain Marvel and Hulk/Bruce Banner! They realize the ten rings are actually much older than anything they’ve ever seen. Captain Marvel dips due to an emergency, but she says they can call her if anything happens. Banner points out that they don’t actually know how to contact her (LOL), but he’ll get to work on learning more about the ten rings. 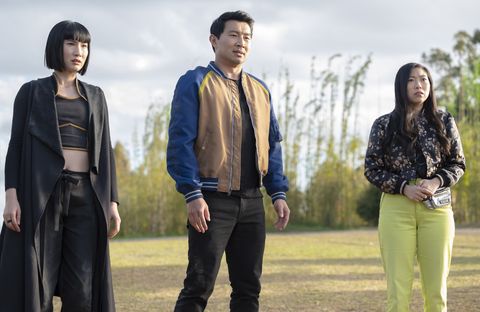 What does this mean for the future of the MCU?

While this scene doesn’t give too many details about what to expect next, it does show that Shang-Chi is now part of the super squad formerly known as the Avengers. With the origins of the ten rings remaining a mystery that even Wong can’t solve, it hints at a bigger secret that could span multiple movies in phase four of the MCU. Also, Captain Marvel and Banner working together means that we’ll probably see more of our fave heroes reunite, and with the whole multiverse coming, we can’t help but think that things will tie together more seamlessly than ever before.

What happened in the Shang-Chi post-credit scene?

Xialing is back at her father’s compound where she is set to shut everything down, according to Shang-Chi. But after Jon Jon comes looking for her, she chooses to follow her own plan instead. Instead of closing her old home down, she turns it into a training ground for a brand new army where both men and women can work together. Xialing sits and observes the battle practices as the camera pans away. From there, we see brand new graffiti and tech being installed, signaling a new era for her and her empire.

What does this mean for the future of the MCU?

Knowing that the ten rings will return, it’s easy for us to say that there might be a Shang-Chi sequel. But the biggest question left is this: Which side Xialing will be on? She had a big reunion with Shang-Chi thanks to the massive fight against their father, but that doesn’t necessarily mean she’s ready to join him in saving the world. So is she a villain now? Or is she starting a new group that will help our favorite heroes along the way? We’ll have to wait and see!