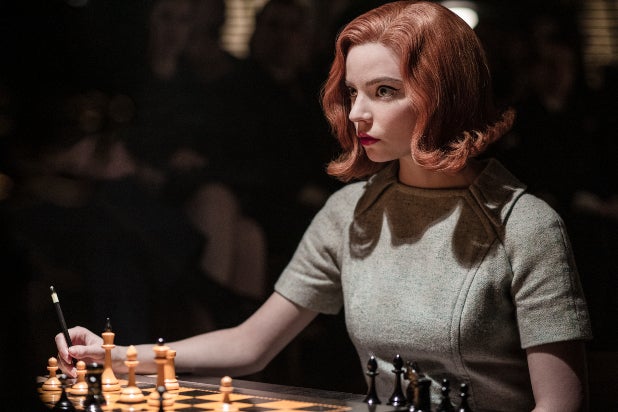 “The Queen’s Gambit” is Netflix’s biggest scripted limited series, according to the streaming service, with 62 million households watching within its first 28 days.

Netflix counts a view whenever someone watches at least two uninterrupted minutes of a show or movie. The series, which stars Anya Taylor-Joy as chess prodigy Beth Harmon, is on Netflix’s Top 10 list in 92 different countries was the top show in 63 countries, including the U.K., Argentina, Israel and South Africa.

“The Queen’s Gambit” is based on Walter Tevis’ 1983 novel. It debuted on Oct. 23. Among all limited series, only the docuseries “Tiger King” had more viewers, with 64 million households tuning in within its first 28 weeks earlier this year.

Netflix says that since the show’s premiere, interest in the centuries-old board game has skyrocketed. Google search queries for chess have doubled while searched for “how to play chess” have hit a nine-year peak. “The conversation around the show has also led to significantly higher interest in next year’s World Championship, according to the International Chess Federation,” Peter Friedlander, vice president of original series, wrote in a blog post on Monday.

“The Queen’s Gambit” is a coming-of-age story that explores the true cost of genius. Abandoned and entrusted to a Kentucky orphanage in the late 1950s, a young Beth Harmon (Taylor-Joy) discovers an astonishing talent for chess while developing an addiction to tranquilizers provided by the state as a sedative for the children. Haunted by her personal demons and fueled by a cocktail of narcotics and obsession, Beth transforms into an impressively skilled and glamorous outcast while determined to conquer the traditional boundaries established in the male-dominated world of competitive chess.