Alright, it’s time to pour yourself a cup of coffee, because the cast of Friends is finally getting back together on TV for a reunion special! It’s def taken a while and honestly there were way too many bumps in the road for my liking, but come May 27th, we’ll all get to see Jennifer Aniston, David Schwimmer, Courteney Cox, Lisa Kudrow, Matt LeBlanc, and Matthew Perry make their way back to their old haunt and talk about what they’ve been up to since the series finale in 2004.

Now, in the name of Janice, I ask you to repeat after me: OH. MY. GOD.

But hey, that’s not all. While we’re jumping out of our skins to hear what our fave group of friends is up to (see what I did there?), HBO Max gave us a tiny pearl of info about what to expect from the reunion, namely a long list of celeb guest appearances. Because I guess our dear sextet of actors isn’t enough for true fans of the series. In true Friends fashion, if you don’t have some weird guest stars at some point or another, is it even a Friends episode?

Here’s a list of all the celebs expected to make cameos. And trust us when we say…it’s as iconic as the group of actors who made this show a hit way back in 1994.

Well, if the former soccer star casually wearing a Friends T-shirt (with an iconic scene on it, no less!) is any indication of how much he loves the show, I wonder what the cast will make him do in his guest spot. Maybe referee a Thanksgiving football game? Granted, it’s not necessarily his kind of football…

I’m truly stumped by this. Maybe he’s on the special because he was a kid when the show aired? Will get back to you once his connection is clearer…

Praying to the music gods that the biggest boy band in the world performs a modernized version of the theme song…and obvs in the water fountain. 🙏

Yes, the Late Late Show star is hosting the Friends reunion. Although there might be some hardcore fans who, um, aren’t so thrilled with this idea…

To honor a show with outfits that quickly became staples of ’90s fashion, it only makes sense for a supermodel from the era to make a guest appearance at the reunion.

…With a supermodel of this era modeling some of the show’s er, unique, fashion moments. Judging from the preview? Cara’s about to revive a rather memorable moment in Friends history.

Even Lady Gaga’s not too busy to miss the Friends reunion!

If there’s any couple from the show who would know exactly what’s up with the Geller siblings post-series, you best believe it would be the duo who played Jack and Judy Geller.

We’re totally about to get the Game of Thrones and Friends mashup we never thought we needed… until now. 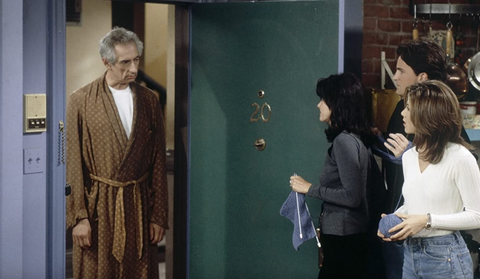 Huh. I always wondered what happened to Mr. Heckles after the group moved out of the apartment…

Mindy has a long-time relationship with NBC (#TheOffice), and she’s busy working on The Sex Lives of College Girls for HBO Max. Maybe she can take inspo from this group of friends for her next hit TV show?

LOL. Does anyone actually remember Joey’s identical hand twin from the end of season 5? Also: Did he ever end up going into modeling???

You love to see it!

GUNTHER’S BACK!!!! And not to be mean here, but… an he bring us some coffee while we’re at it?

As much as I really want to know what Janice has been up to as of late, I do also need her to say her iconic catchphrase at some point during the reunion.

Since the finale aired, fans have wondered how Jill Green feels about her ex Ross getting back together with her sister Rachel. And with Reese involved in the reunion, we just might get to find out.

Another unusual choice for a guest star, but hey, even Nobel Peace Prize winners (and recent college grads!) need to unwind and binge a hit TV show every now and then!

Want the latest info on all things TV? We know you do. You can keep up with all of our entertainment coverage here.