Lately, it feels like every movie has us thinking, “What the fuck did I just watch?” In this series, we will break down exactly what happened in all those wild, mind-bendy, and just plain strange flicks…in a way that’s much easier to understand than the actual film.

Who doesn’t love a good Netflix thriller? Apparently, the people who made Secret Obsession. Honestly, I knew this would be epically bad from the opening scene. Secret Obsession begins with a woman (Brenda Song)—hiding from…someone. And let me just say, she’s really bad at it. She’s out here crouching on a toilet in a bathroom stall squealing like a maniac. Shut up! I almost closed my laptop, but I kept going for all of you. You’re welcome.

Somehow, creepy knife man doesn’t hear her wildly heavy breathing and decides to open every single stall, giving our leading lady enough time to escape the public bathroom. She continues running from the man who, for some reason, is walking slower than a supernatural serial killer in an ’80s slasher flick. She seems like she’s gonna get away until she gets hit by a car.

At the hospital, a man identifying himself as Russell Williams (Mike Vogel) bursts in asking for his wife Jennifer. He’s shouting her name down the hall and it’s like, dude, you were just told she’s in surgery. She can’t answer you. He’s carrying a silver lighter engraved with the phrase “To My Darling Russel Love Jennifer,” so I guess we’re supposed to think he’s legit. It really bothers me that there’s no comma after love.

Before you ask, no, no one called him to tell him his wife was in the hospital. No, they didn’t use any means to identify “Jennifer Williams” other than her husband’s word. No, they didn’t double check literally anything.

Luckily, the guy from the Allstate commercials is on the case. Detective Page (Dennis Haysbert) is sent to the scene of the accident and gets ~bad vibes~ pretty quickly. But wait, there’s backstory! Page has a missing daughter! We know this because he cries over a pile of presents while remembering voices that say, “you’re a cop, why can’t you find your own daughter?” and “there are no leads in the disappearance of 10 year-old Hannah Page.” We literally never hear anything else about her. Jennifer is clearly in good hands.

When Jennifer wakes up, she has a very special kind of amnesia. She still has her “semantic” memory (her name, family, etc…) but her “episodic” memory is all messed up. She does not remember Russell. But I thought she remembers family…ugh, whatever.

If this sounds like every Lifetime movie ever, and you’re guessing Russell is for sure our bad guy, well, you’re right on both counts! Listen, if you ever wake up from an injury and someone you don’t know claims they’re your husband, don’t just…go home with them. I don’t care how hot he is. Especially if he shows you a bunch of poorly photoshopped pictures in a photo album. That’s red flag number one. Who even uses photo albums anymore? 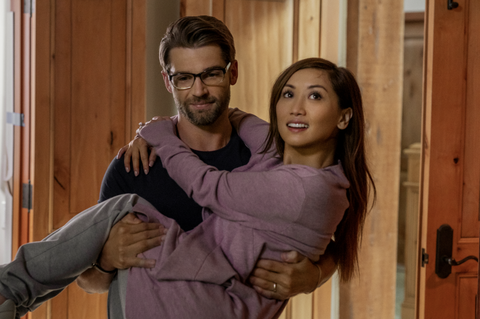 Things go to shit pretty quickly after Jennifer arrives at her and Russell’s secluded home in the mountains, where there’s conveniently no cell service (red flag number two). While Detective Page digs into Russell’s info (all fake), Jennifer limps around the whole damn house trying to figure out why her supposed husband is creepy AF. Oh, and Russell murders a man who witnessed the accident, but didn’t see Russell’s face. Don’t ask me why.

Look, I could go through every moment of this movie with you, but there are no twists. Detective Page manages to figure out the whole story through “police work” that doesn’t make any sense. He finds her parents dead and rotting. Russell is a creepy bad guy who worked with Jennifer and her actual husband for years. Russell watches Jennifer while she sleeps through a hidden camera and locks her in the bedroom when he goes out for groceries. That’s the kinda shit we’re dealing with here. 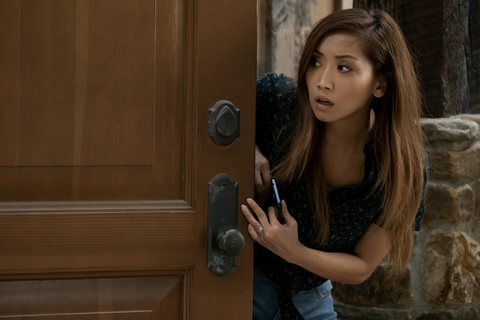 It really doesn’t take long for things to go off the rails. Jennifer breaks out of the room and logs into hubby’s computer where he keeps all the photos of Jen and her real-life husband. She tries to run, but he catches her and chains her to the bed. She escapes for like a second, but he catches her and ties her up again, with a rope this time. It’s a whole thing. Detective Page shows up, too, but Ryan knocks him out pretty fast.

That’s when our villain starts monologuing. He’s been obsessed with Jennifer for years, but she never noticed him—blah blah blah. He killed her husband and parents and was gonna kill her too, but “fate” intervened when she got hit by a car. But like, none of this information is new.

The movie ends because movie stalkers are easy to trick, and he falls for it when Jennifer promises to give him a chance. When he goes to get her a drink, she escapes again using the lighter from the beginning of the movie, setting her bonds on fire. When he comes back, she knocks him out and it’s his turn to get locked in a room.

Not for long, though, because everyone is a Houdini in this movie. Detective Page manages to get out from the fridge in bad guy’s garage and Russell breaks free just as fast. Together, Page and Jennifer take down Russell. Yes, that’s everything. To say this movie lacked any hint of originality or suspense would be a massive understatement.

The most WTF moments of Secret Obsession: