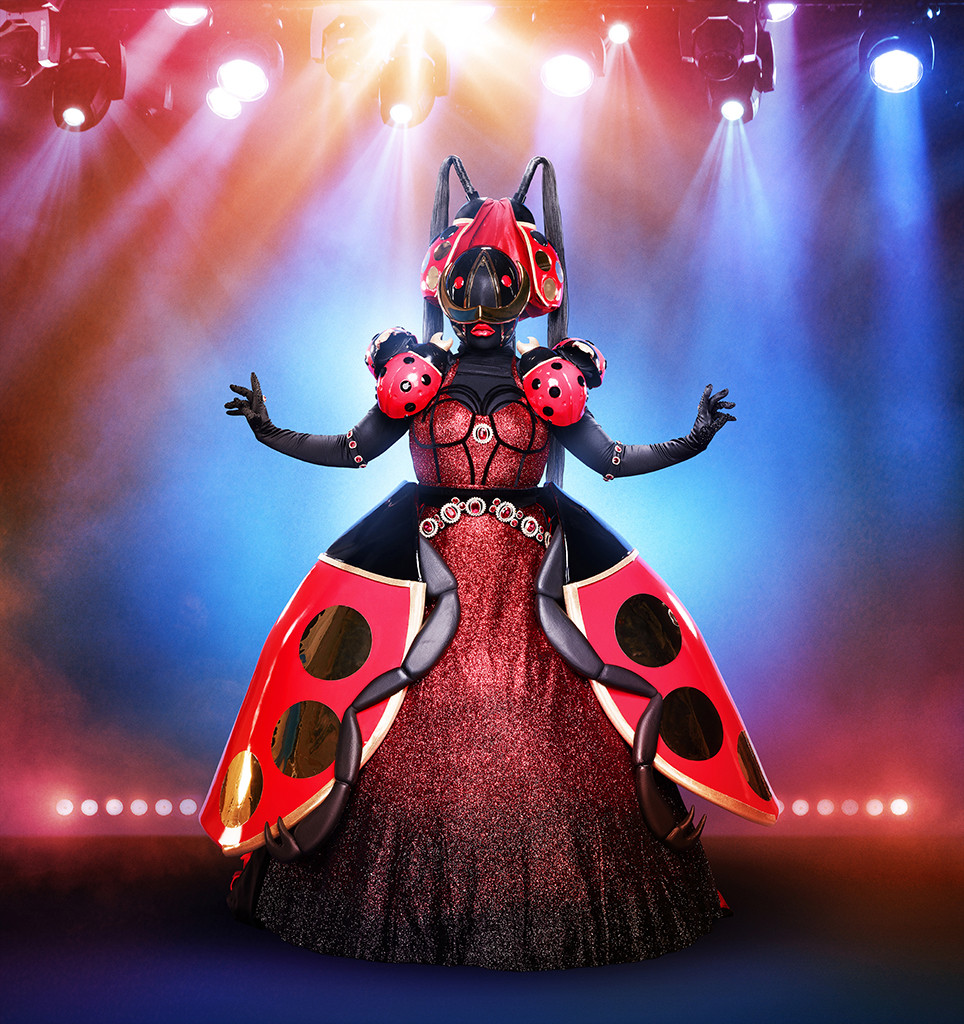 The Masked Singer returned for another round tonight and gave us new performances from Fox, Flower, Rottweiler, Tree, and Ladybug. Ladybug lost the night in the end and took off her mask to reveal that it was Kelly Osbourne, faking a southern accent the entire time, so nobody ever even guessed her though everyone picked up on the famous, dramatic family aspect.

For everybody else, we got a few new clues that mostly only confirmed what we were already thinking for each of them. We also got commentary from Triumph the Insult Comic Dog, who joined the panel and also actually made a few solid guesses, while Jenny McCarthy remained convinced that Jamie Foxx is under one of those masks. Every time she says it, it gets more and more ridiculous.

This round gave us “revealing items” for all the singers who didn’t get to reveal them last week, and they included a career-changing bowl of soup for Tree, a boombox for the Fox, a deck of cards for the Flower, and a portrait of Triumph allegedly painted by the Rottweiler.

All of our guesses (with much help from the internet) are below, along with all the major clues so far. 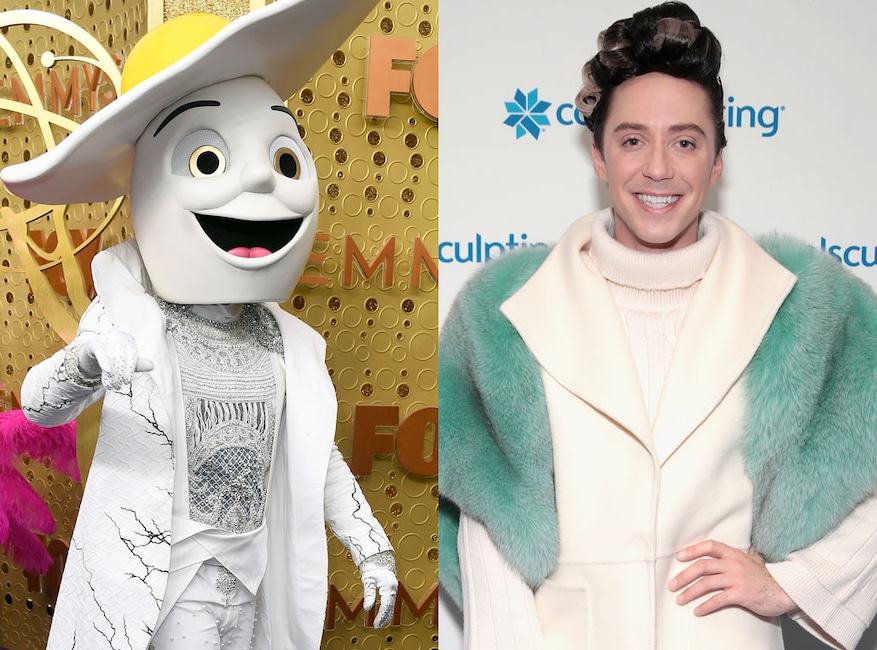 Week 1 Clues: “intimate evenings with egg,” strong on the outside, vulnerable on the inside, coming on this show is a bit of a leap, years of being on top of the pyramid, going for the gold, always eggs-tra and does enjoy a good sparkle 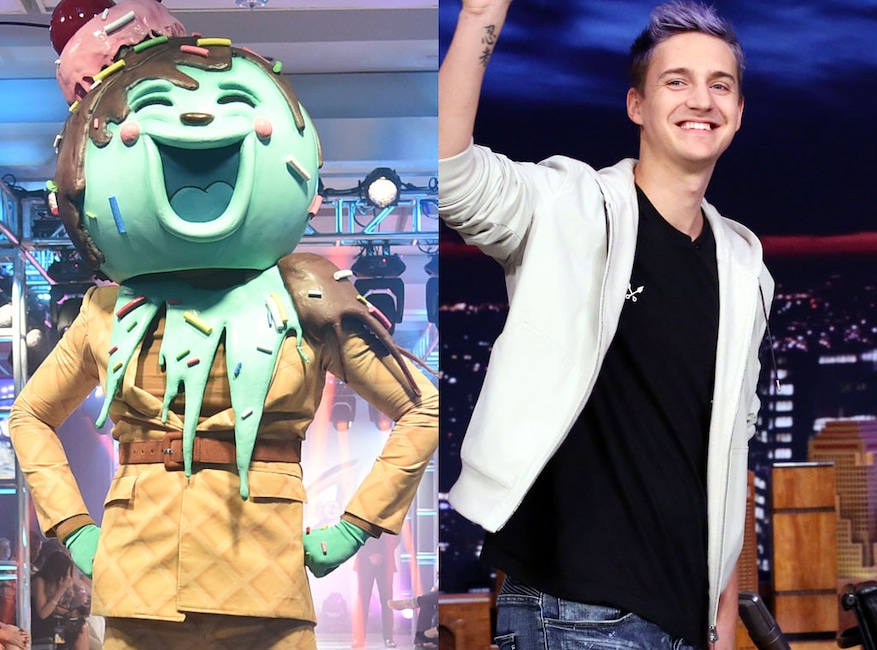 Week 1 Clues: Every day is cheat day, but life wasn’t always this chill, caught a lot of flack for doing what he loved most, his parents had their doubts, believed in his ridiculous dream and turned his fantasy into reality, has over a billion reasons to be proud of his hard work, used to performing in front of millions of people, now in a “different kind of mask,” says he’s sweet and everybody loves him 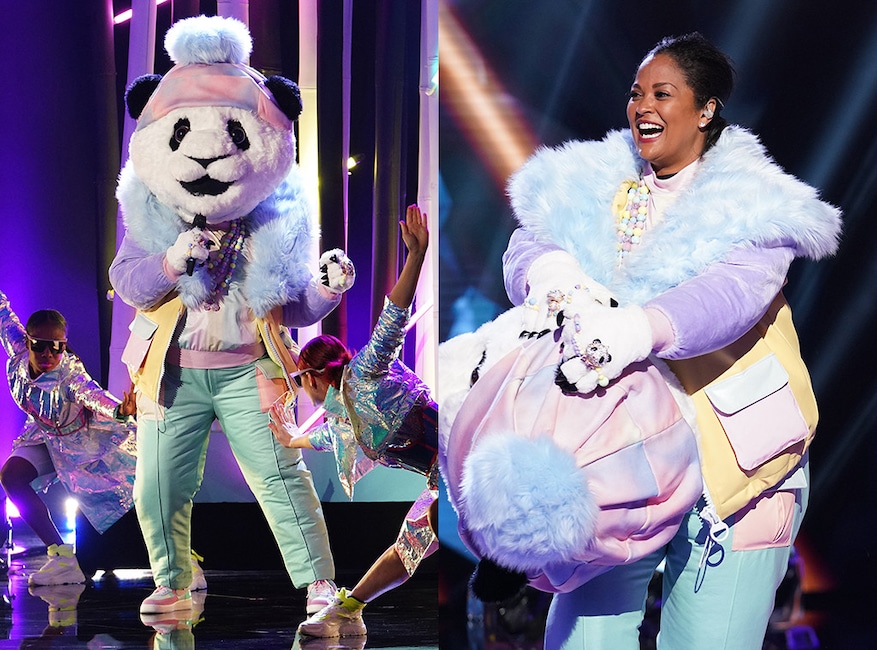 Song: “Stronger (What Doesn’t Kill You)” 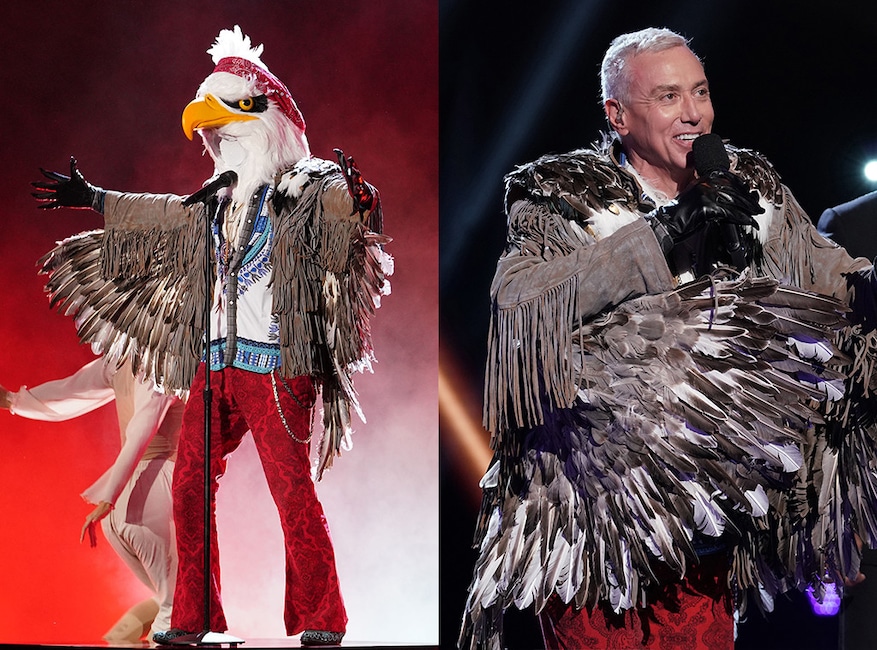 Clues: He’s the face of his field, but he’s had a health scare and lost a parent and has now realized life is short. He wants to tell his own stories and leave the safety of his nest behind. Doesn’t just hang out with rockstars, but is one.

Song: “I Would Do Anything For Love” 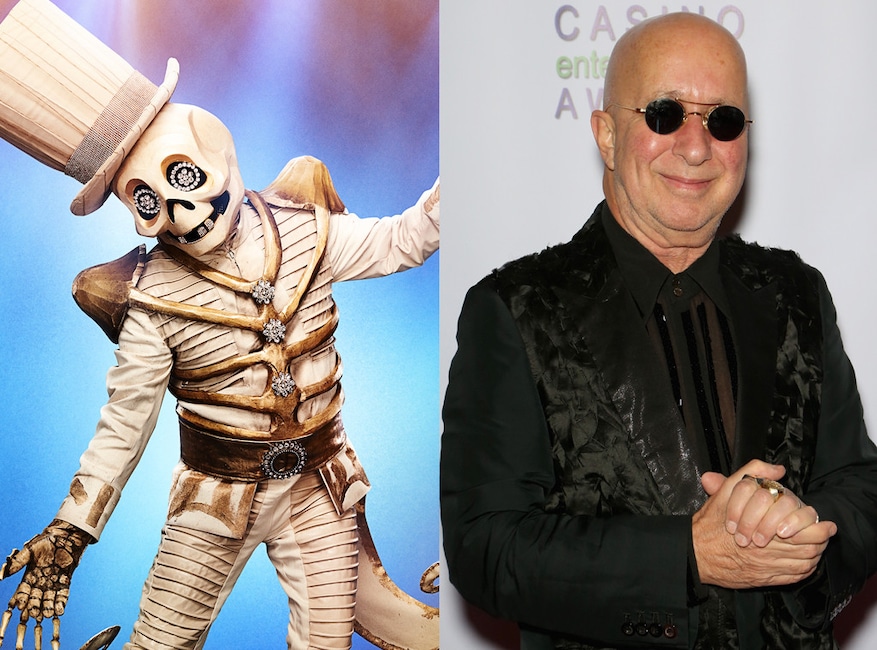 Week 4 Clues: Lots of talk about being overshadowed and in the background, pulling strings and conducting. Now he’s in the spotlight…and revealed as Paul Schafer.

Songs: “Are You Gonna Be My Girl” by Jet. 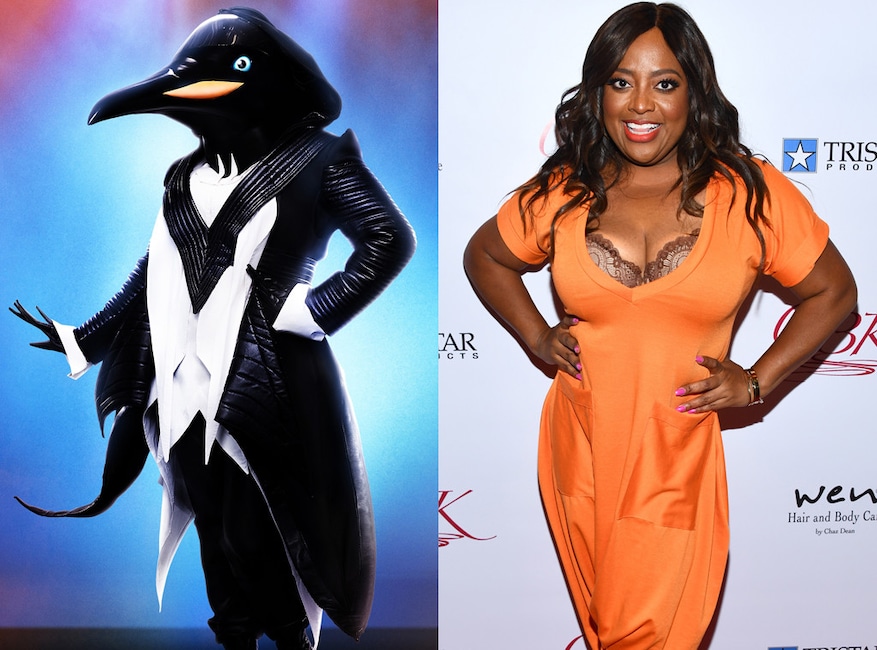 Clues: Has always been told she’s not pretty enough, not smart enough, not funny enough. A news report says her career is over. Her “hit list” includes classroom bully, comedy club owner, Hollywood casting director, exes, the press, and herself. Wants to sing for those of us who dared to be different, doesn’t need a permission slip to be who she is, everything is not black and white, signs read “I’m not your secretary,” always on the d-list, the brightest star could be born out of the greatest tragedy, new adventures of old penguin means she’s making people laugh, never curbs her enthusiasm, she’s been in many relationships with many of the presidents

Guess: Sherri Shepherd. She even has a book called “Permission Slips.” The performance of The Middle sounded a little breathier than Sherri’s voice, but maybe she was trying to disguise it? Or it’s someone else entirely! Could this one also be Raven-Symone? 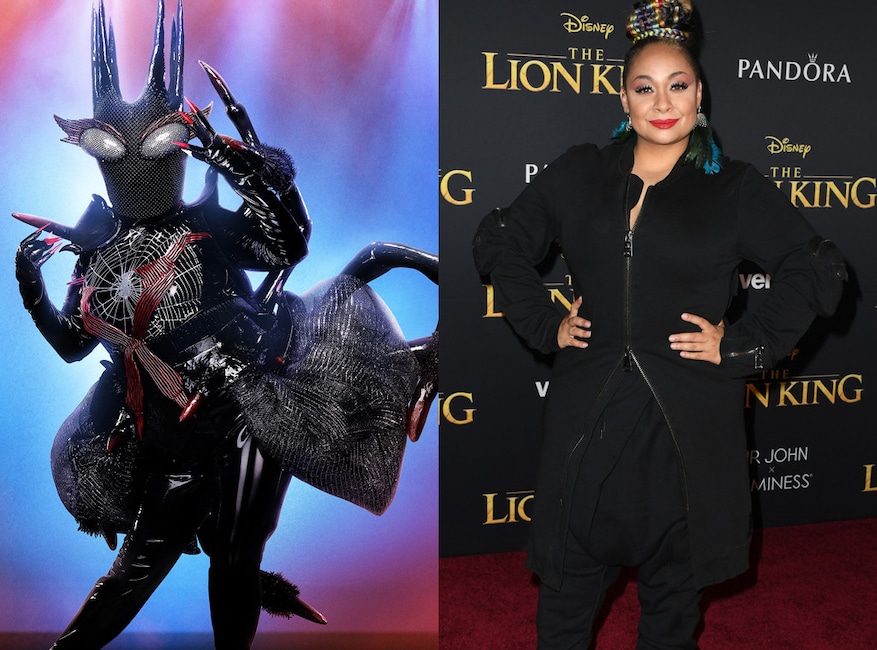 Clues: She had a squeaky clean image and an amazing career that spanned all areas, including music and TV. Now she doesn’t have to pretend anymore and she’s got her voice…and butt. She never went actually went to prom, but she did on TV. This costume feels like home, she can be herself and doesn’t have to pretend anymore, but she can make herself at home in any nook or cranny. Whether it’s a cozy den in Memphis or a bungalow in Bel Aire, fill your space with things that spark joy, she’s a hot homemaker and not even a broken arm can stop her.

Guess: The more we hear from this spooky spider, the more we’re convinced it’s none other than former child star Raven-Symone. But we also could hear RHOA star Kandi Burruss, who also just so happens to be a singer and prolific songwriter and former member of Xscape. 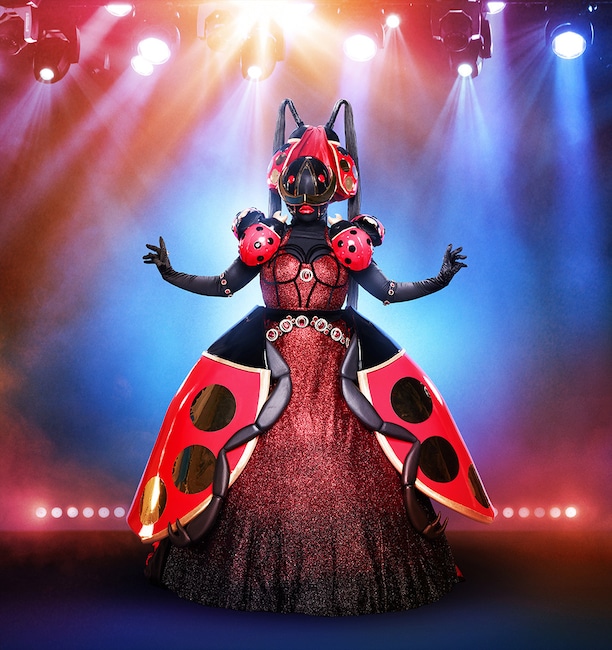 Week 1 Clues: “Spin Your Wheel” game show, had a lifetime of drama, family feud, lots of family gossip, born into the limelight, has a southern accent, has been through so much. She loves a shimmy. Thought this was all a game, this reminds her of growing up when everything on the outside looked rosy, but on the inside her world was upside down, “Best host,” “3 of cups,” limes, cross, “pieces of me,” “the queens of the world taught me how to be a lady,” a four of clubs, makeup 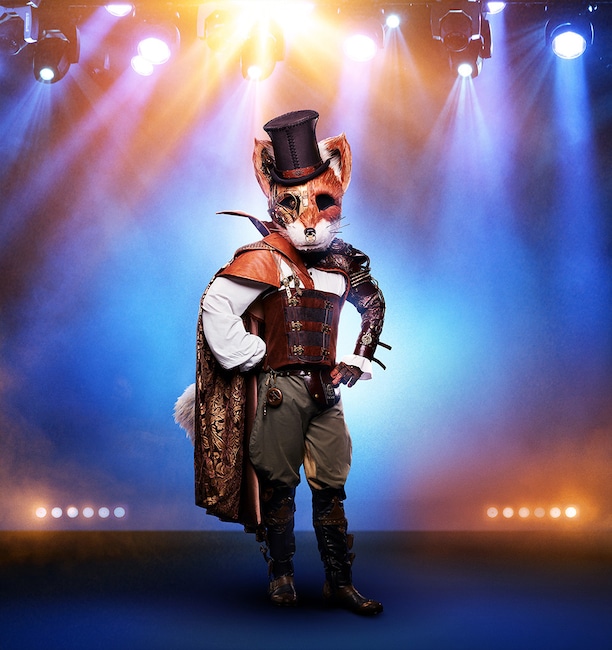 Clues: Comic books, bedtime stories, works best at night, dabbled in many genres from Doogie to Doubtfire, lived two different lives—his on-air superhero persona who lives to entertain, and then who he is at home, he was bullied so he learned to sound like other foxes, Shazam, Fast and Furious, never felt like the applause was for the real him. He’s had a 30 year career performing songs like “Everybody Say Yeah,” from Kinky Boots.

Best guess: Wayne Brady! He’s played Neil Patrick Harris’ brother on HIMYM and worked with Robin Williams many times on Whose Line Is It Anyway, on which he dabbled in many genres. He’s also a fantastic singer who’s performed on Broadway. We just feel very sure this is Wayne Brady. 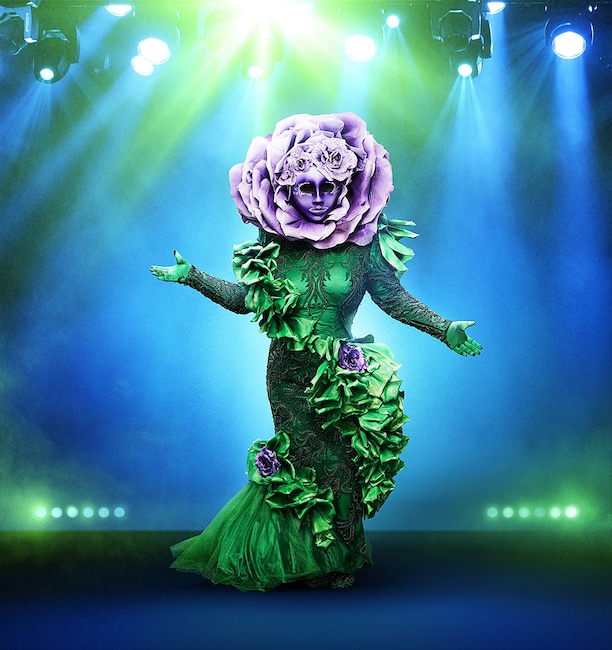 Week 3 Clues: She blossoms in multiple fields, she cooks, she crafts, has a clothing line. Does everything to the nines, doesn’t even go to the grocery store without lipstick and pumps on, but doesn’t have makeup on under the mask. Ready to have fun and be free after sowing the seeds of this empire with her bare hands. “This legend is here to be a vision of love on this stage,” has never taken a voice lesson in her life, she’s just a girl who’s never left her secret garden, her favorite band is Kings of Leon

Visuals: French flag, a flashlight instead of a microphone, 524, a ring with a $13 price tag

Guess: Patti LaBelle was trending on Twitter after viewers heard the Flower’s voice, and she once had a cooking show. 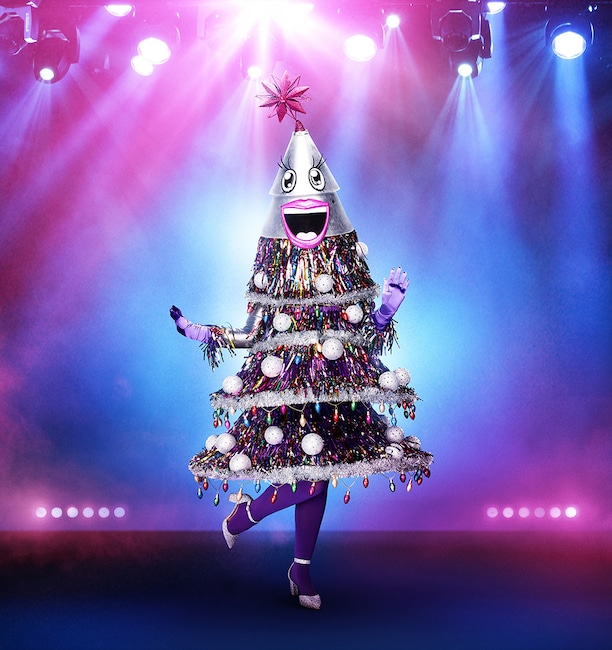 Week 1 Clues: Loves getting dolled up but it’s only once a year, wishes people knew her for more than one thing, spends so long in exile when she could “dish out” more talents to make the world smile, more than an expert in delicious treats, here to jazz up her career, not a regular tree but a cool tree, plays the piano, daddy’s a tinsel, mom’s a pom pom, she’s their favorite elf, never home alone, trying to be as colorful as a fruitcake, has been a food-related brand ambassador

Revealing item: A bowl of soup

Guess: This one seems to be truly stumping people, including us. Rachael Ray has been a popular guess, as has Elvira (subbing in Christmas for Halloween) and Ana Gasteyer (who has a Christmas jazz album). Amy Sedaris? Valerie Bertenelli? Darlene Love? Marie Osmond? Ayesha Curry? 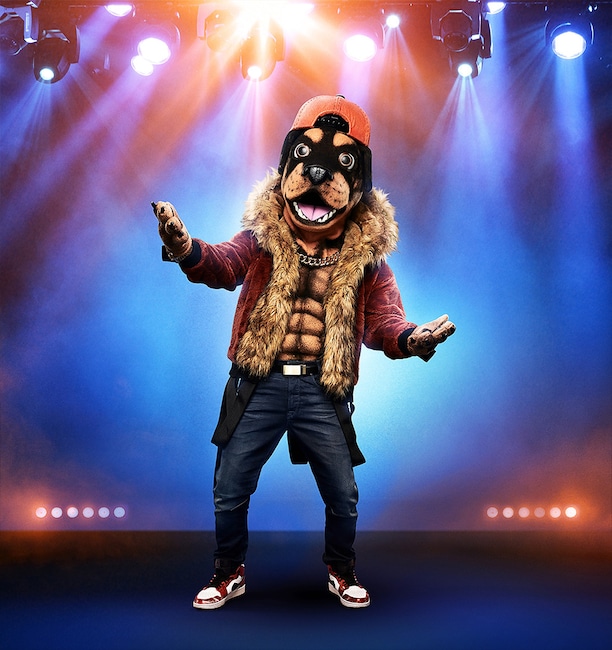 Clues: “pigskin under the Friday night lights,” rose to fame almost overnight by being a hungry competitor, chose Rottweiler because he was bitten by one as a kid, wants to show the doubters it’s not over, ready to take a bite out of the competition, has been judged since he entered the game, “I want it that way,” always knew he was meant to be a star, started with musical theatre and makeup, North Carolina

Guess: The internet seems sure it’s Chris Daughtry (who is from North Carolina), but Scott Porter from Friday Night Lights has also been a popular guess. JC Chasez? Whoever he is, he’s fantastic. 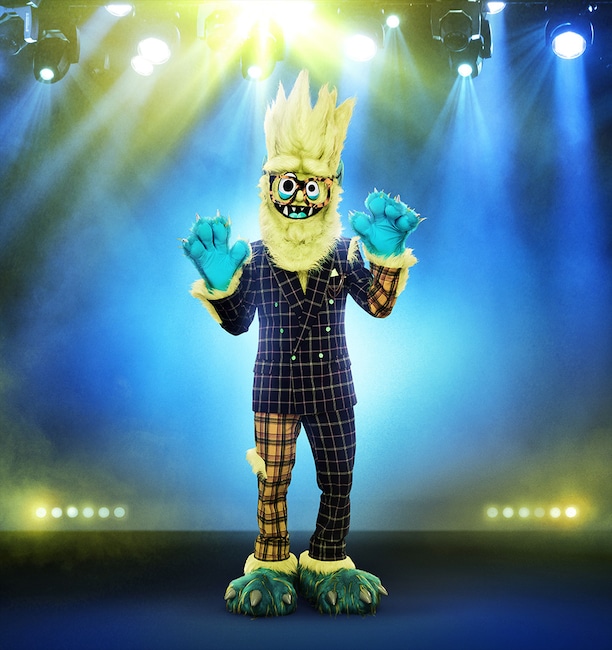 Week 4 Clues: There were visuals of magic and the American flag, and he said he wears his heart on his sleeve and is a big softie at his core. There was also a reference to not running with the bulls. He once went to rehab. Loves to break bread with the homies, including gummy bears. You can feel free to snoop into his life, he loves to serenade the ladies. He’s dipping his shoes into soup?

Guess: The internet is pretty sure it’s Victor Oladipo of the Pacers, and we gotta agree. He’s even got some songs out, and he’s got a truly gorgeous voice. 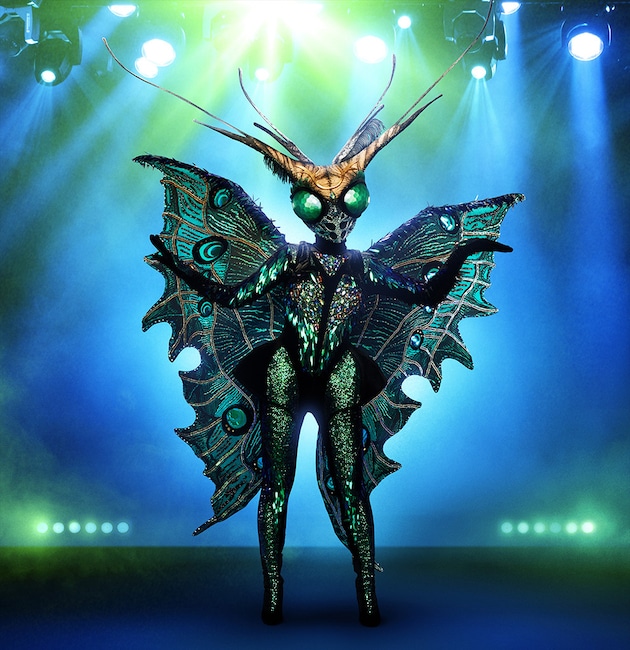 Week 4 Clues: Lots of London visuals and talk of once being at the height of their career. Everyone knew her name, but when she tried to spread her wings, she lost everything. Breakdowns and breakups followed, as did a lot of alone time in hibernation. They even had a butterfly tattoo. Has loved performing since she was seven, welcomed into the choir’s joyful noise, she’s the car salesman of the year, she has a nurse’s hat, she’s a Brit award winner.

Revealing item: A forensic kit – she once got the choice to choose between life or death. 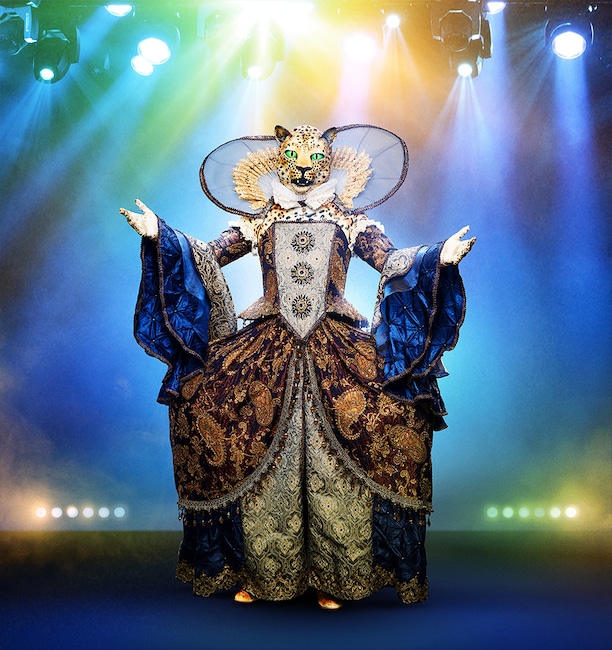 Week 4 Clues: More references to once being on top, and primetime, and now they’re flipping the script. Given up as a baby, passed from pack to pack. Lived life in color ever since. Wants to be a hero to his cubs. Once served fast food. He was a young cub on the rose, traveling with a pack of misfits. He’s a fresh new edition of the old him. Headlines: Star strikes a POSE, Performer of SLOW JAMZ plays at the white house, RU gonna go my way

Revealing item: Cameras – he’s spent most of his life in front of the camera, now he’s behind it

Guess: Seal. It doesn’t feel like something Seal would necessarily do, but it sounds like Seal, and according to his Wikipedia, Seal was raised by a foster family. And like…when you google “Seal Leopard,” you remember that leopard seals are already a thing. Then again, we’ve also been getting drag queen vibes from Leopard and as far as we know, Seal is not a drag queen. And we don’t really think of him as being in front of or behind a camera. 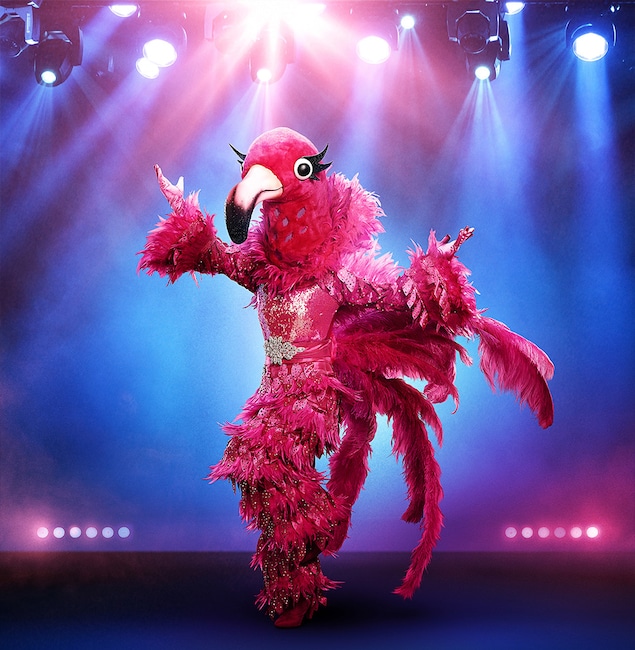 Clues: When she first started out, she was a hood rat but a “powerful wizard” brought her to Hollywood. She never had any connections and came from humble beginnings. She studied to be a doctor. Her story’s not all fantasy, and she used to hate the sound of her own voice, but now she’s danced, sung, and acted her way to the top.

Guess: Adrienne Bailon. It’s definitely Adrienne Bailon. She went to school for medicine but was then discovered by “powerful wizard” Ricky Martin, and she and her The Real cohosts have won an NAACP Image award. If the Black Widow actually is Raven, season 2 has been a Cheetah Girls reunion all along!

The Masked Singer airs Wednesdays at 8 p.m. on Fox.