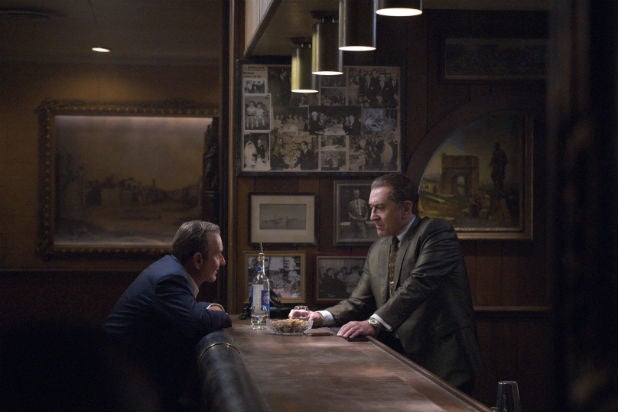 Robert De Niro was just about to start shooting another film with Martin Scorsese in 2007 when he read a book about a WWII veteran turned Mafia hitman named Frank Sheeran and decided that was really the film he wanted to make: the film that became Netflix’s upcoming awards-bait crime drama “The Irishman.”

“When Bob presented the book to me, I was very strongly attached,” Scorsese recalled at a press conference Friday following the first screening of the 209-minute film ahead of its world premiere at the New York Film Festival at Lincoln Center. “We didn’t have to say much.”

The filmmaker and his star had been deep in discussions with Paramount boss Brad Grey about an adaptation of Don Winslow’s crime novel “The Winter of Frankie Machine” — which was close to a greenlight — when the two read Charles Brandt’s nonfiction book about Sheeran, “I Heard You Paint Houses.”

Instead, everyone decided to pull back and pursue “The Irishman” as its own project. De Niro’s longtime producing partner Jane Rosenthal recalled the fateful meeting with Grey when the “Frankie Machine” project fell apart. “He said what very producer wants to hear … ‘You mean to tell me that this movie you want me to green-light is now a development deal?’”

The filmmakers and cast also discussed the ILM technology that de-ages seventysomething stars De Niro, Al Pacino and Joe Pesci so they can play characters in their 30s and 40s all the way through old age. The FX giant had done early tests of De Niro replaying scenes from “Goodfellas” to convince Netflix of the technology to make the cast look decades younger.

The tests also fooled the cast. “They showed me this thing of Bob doing ‘Goodfellas,’ and I’m thinking, ‘Why is he doing this again?’ And then later, I said, ‘Wait, isn’t he old?’” Al Pacino recalled. “I said, ‘Wow — he’s Meryl Streep.’ When he did that, it’s really an eye-opener.”

When De Niro saw the new de-aged “Goodfellas” scenes side by side with his original performance, the actor said, “I thought, ‘I can extend my career another 30 years.’”

The ILM technology required two cameras that each had three lenses, the filmmakers said. But that wasn’t the only technical challenge involved in the production — which involved 309 scenes in 117 locations over 108 shooting days. “The technology did not slow us down,” producer Emma Tillinger Koskoff said, noting that the crew sometimes moved two or three times in a single day.

“The Irishman” is an epic saga of organized crime in post-war America told through the eyes of World War II veteran Frank Sheeran (De Niro), a hustler and hitman who worked alongside some of the most notorious figures of the 20th century.

Spanning decades, the film chronicles one of the greatest unsolved mysteries in American history, the disappearance of legendary union boss Jimmy Hoffa (Pacino), and offers a monumental journey through the hidden corridors of organized crime: its inner workings, rivalries and connections to mainstream politics.

“The Irishman” opens in limited release in theaters on Nov. 1 ahead of its streaming launch on Netflix on Nov. 27.