Death is depicted differently in “Station Eleven.” TV typically relishes its bedside goodbyes, milking those lingering close-ups of the sick or dying for every last tear. Dystopian disaster stories tend to go one step further, honing in on gruesome fatalities or honoring last breaths from the battlefield, exhaled in the arms of their best friends. But in Patrick Somerville’s apocalyptic HBO Max limited series, characters rarely get that close. By physical distance or time itself, they’re removed from their loved ones’ sudden departure. They hear their partner’s last words over a voicemail. They learn of their family’s fate via a stranger’s text. Sometimes there is no confirmation. The implication is enough.

“Station Eleven” begins as a flu-like virus spreads across the globe, killing 99 percent of the people it infects. Its present day looks like ours, then flashes forward (and back again) to tell an eerie, intimate tale. The modern parallels are unavoidable, and Somerville, along with pilot director and executive producer Hiro Murai, doesn’t duck them. There are shots of overrun hospitals, grocery store shopping sprees, airports filled with stranded passengers, and people in masks. Even the series’ respectful distance from death may be too evocative for some viewers. Being kept from relatives during their final moments is a memory no one wants to relive, nor should they. But there are no slow-motion shots of doctors and nurses holding back bereft mourners. There is simply an acknowledgment that a loss has happened. That it is happening. And that’s enough.

Allowing the real world to seep in doesn’t mean reveling in the fear and panic associated with these now-familiar scenes. “Station Eleven” is not a horror story. The message alerts and phone calls speak to that heartbreaking distance, but their purpose isn’t to hammer home an absence; they’re a reminder of rich lives already led and what their surviving loved ones will do next. Within these 10 episodes, there’s a grace present, even in death, that’s rare to an apocalyptic adventure; a grace that makes clear this is an end-of-the-world saga like no other.

Murai kicks things off with a tone-setting time jump. In an old Chicago theater, pigs sniff around in the lobby and greenery fills the long-vacant seats. Then, with the flicker of a spotlight and the faint sound of a cough, it’s 20 years earlier. The seats are filled with guests, and a full production of “King Lear” is underway. Murai repeats these quick cuts throughout the pilot, which takes place largely in the present, but will flash forward to brief glimpses of the future. At first, such time jumps feel ominous — where there once were people to tend lawns and ride the subway, now there’s only plants — but their interpretation soon shifts, as dark compositions of empty driveways give way to the same frame filled with lush vegetation, bathed in sunshine. The future isn’t empty. Life goes on, anew.

Meanwhile, the story latches on to Jeevan (Himesh Patel), an audience member who becomes the one person responsible enough to chaperone a young actor named Kirsten (Matilda Lawler) back to her home after the play. But as the two hop on the “L” (the Chicago-ness of “Station Eleven” is also very well captured), things become a bit more complicated. Jeevan hears from his sister, a nurse at a local hospital, that the virus detected overseas is more serious than they first thought. She warns him to gather supplies and hole up with their brother, Frank (Andy McQueen), if he wants to survive. Panicked but convinced, Jeevan does what he’s told, bringing Kirsten along when they can’t locate her parents.

In between stops on their journey, the episode also cuts to 10 days earlier, when we meet Miranda (Danielle Deadwyler), a logistics expert who makes time ahead of an overseas trip to visit her former husband, Arthur (Gael García Bernal), before his debut on stage. Sitting in his dressing room, with Kirsten perched nearby, Miranda reveals why she’s there: “I finished it,” she says, handing her movie star ex a copy of a graphic novel. Titled “Station Eleven,” the book immediately grabs Kirsten’s attention — so much so, that we later see her as an adult (played by Mackenzie Davis), flipping through the dog-eared pages some 20 years in the future. 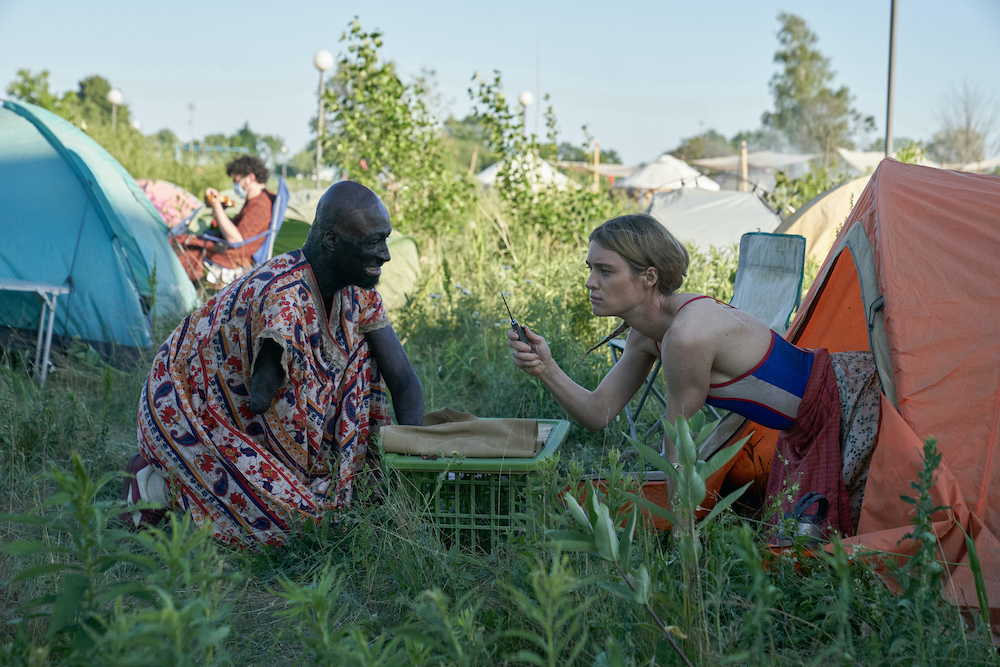 Kirsten is still acting, traveling with a Shakespearean troupe called The Traveling Symphony and putting on various plays wherever they stop. Their journey takes up the bulk of the series, though “Station Eleven” regularly bounces between timelines and characters, dedicating its magnificent third hour to Matilda (and, in turn, a gripping, textured performance from Deadwyler) and an arresting fifth episode to Clark (David Wilmot) and Elizabeth (Caitlin Fitzgerald), two friends of Arthur’s, though not necessarily each other. Slowly but steadily, you learn how the ensemble connects, as well as what happened to Jeevan, Frank, and more characters who faced the flu when it first broke.

If there are flaws to be found in “Station Eleven” — and I do mean “if,” because whether they rub you the right way or not, they are all thoughtful, purposeful choices —  they’re in the series’ length as well as its unchecked, theater-kid dedication to Shakespeare. The latter may work tremendously for anyone who fancies themself an ac-tor, or audiences who enjoy analyzing every new version of the Bard’s classics (if you’ve already pre-ordered tickets to “The Tragedy of MacBeth,” then you’ll be fine), but the show’s meta construction means watching actors play actors who preach the importance of acting, and that’s… a bit much. No one with a subscription to HBO Max (home of “Succession” and “Curb Your Enthusiasm”) should besmirch the value of artistic expression, which is core to “Station Eleven’s” overriding purpose, but the show could still make that point (and progress its characters’ emotional journey) without so many reenactments.

As for the length, unlike most streaming originals these days, I only wish this limited series was longer. The world constructed by Murai — along with production designer Ruth Ammon (“Vida,” “Manhattan”) and directors Jeremy Podeswa, Helen Shaver, and Lucy Tcherniak — is too detailed and immersive to be left so soon. The characters — brought to vivid life by an unforgettable ensemble and inspired staff of writers including Somerville, Nick Cuse, Sarah McCarron, and Cord Jefferson — are the kind you want to follow forever; their arcs reach satisfying ends, but still feel more seasonal than absolute. With Mandel onboard as a producer, I would love to see any kind of continuation these creatives can dream up — which is something I never thought I’d say regarding a TV show tied to a pandemic or even a truly beautiful limited series.

“Station Eleven” probably sounds like the last thing you want to watch right now. And if it’s too much, too soon, that’s fair. But as we sit on the precipice of the pandemic’s third year, the way this particular story reframes how to look at the end of the world may also prove essential. Episodes don’t dwell on death; they value life. The Traveling Symphony’s motto is “because survival is insufficient,” and the series embodies that belief. Like “Lost” and “The Leftovers” before it, the imminent presence of an unseen killer is merely a means to prod characters and all of us watching toward a deeper appreciation of our time on Earth. Grace, hope, and encouragement are foundational elements of “Station Eleven” that help turn what could’ve been a very bad idea into a profoundly cathartic experience. Sometimes, we need to keep death at a distance, in order to remember why we’re so scared of it in the first place.

“Station Eleven” premieres Thursday, December 16 with three episodes on HBO Max. Two episodes will be released each of the following weeks, until the finale debuts January 13.