Kate McKinnon is reflecting further on her decision to depart Saturday Night Live — and her failed goal to make out with each and every one of her colleagues as part of her May 21 sendoff. (We swear that second part will make sense soon.)


In the latest episode of Vulture‘s Good One podcast, the two-time Emmy winner chokes up as she recalls telling series boss Lorne Michaels that she would not be returning for a 12th season.

“Telling Lorne was really hard,” she says. “He knew it was coming. He was very sweet. But he has been a father figure to me, and so much more. It was just really hard — simple human emotions, not wanting to say goodbye to something you love.”

As for her previous statements on Live With Kelly & Ryan, on which she declared that her “body was tired” and it “felt like it was time,” she adds: “Leaving was in the back of my mind for a while, because it’s just a grueling schedule. I mean, I could do it for the rest of my life, happily, if the schedule were not so grueling and if I was not naturally a person who liked to wake up at 8 am and go to bed at midnight.”

Though she could have left at any point after her initial seven-year deal was up, McKinnon says that she chose to stay on SNL in part because of the pandemic and “wanting to wait until it was normal again,” and in part because “I hate change and I hate goodbyes and I love those people.”

McKinnon bade SNL a teary farewell in the Season 47 finale’s cold open, which saw her oft-abducted Mrs. Rafferty character agree to accompany the UFO back to outer space. 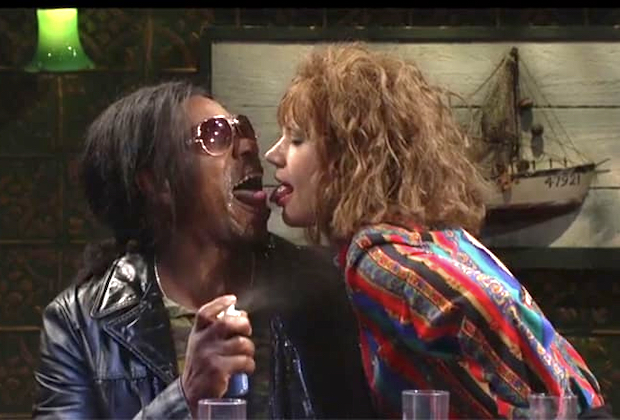 “I’m not an ostentatious person, and I don’t like to make a show of myself,” she says regarding her goodbye sketch, “but I did want a moment of catharsis, of trying to encapsulate what the whole [experience of being on SNL] had meant to me and telling that to the audience….. [“Close Encounter” sketch writers] Streeter [Seidell] and Mikey [Day] had floated the idea of me getting in a spaceship at the end, and I thought that was beautiful.”

Originally, though, she wanted to reprise barfly Sheila Sovage (pictured) for her farewell sketch, “and make out, individually, with every one of my colleagues,” she says. “But due to COVID restrictions and due to [a “Final Encounter”] being such a beautiful idea, we went with that. So I didn’t get to make out with everyone, which is a bother, but maybe one day.”