You had your time. You had your history. You had Graham Kennedy – five-time winner, and he was the one who named you after the man who invented television. You had Bert, your peerless host in the golden age and multiple winner. There was Kylie. Ray. Georgie. Lisa. And the last of the greats, Rove. 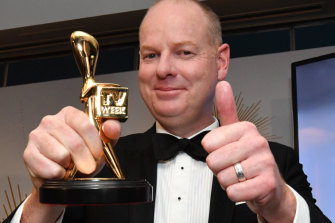 And then it went south. Scott Cam?

Please. Build us a wall.

On Sunday night, comedian Tom Gleeson gleefully put this glorious but haggard old bastard of an award to bed. If TV Week – for those under 80, this was a magazine that once ruled the television world – persists with the Gold Logie embarrassment after this year’s spectacular implosion, then it deserves the terrible TV ratings these awards have recently received. 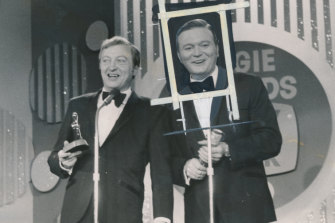 Back in the day: Graham Kennedy receives the Gold Logie from Bert Newton in 1969.Credit:Archive

As Gleeson said when he accepted the golden gong: "I’m in a terrible spot because I like it and I hate it at the same time."

There were four things worth watching on Sunday night’s tight ceremony, which miraculously ended before anyone died in situ and had to be added to the In Memoriam segment during the broadcast.

One of the four things was the Memoriam segment itself, presented by Tracy Grimshaw with an opening tribute to the peerless Mike Willesee. The rest of it was accompanied by another late television legend, Geoff Harvey – the Mike Walsh Show and Midday music man – playing The Way We Were on screen as other late greats drifted across the screen.

It might as well have been a memorial to the Logies themselves, given the contrast between then and now, and Gleeson’s brutal bursts across the screen. 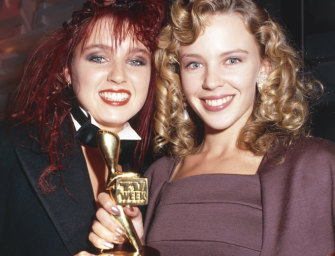 It is to the eternal credit of Logies organisers that they invited the award wrecker to deliver the opening monologue.

And deliver he did.

He spared no one, including Karl Stefanovic. Nine, he observed, was happy to pay for fantasy weddings – "and then they fired Karl for having one".

If you’d tuned in only for the deadly opening and the dead people, you’d have been rewarded beyond expectation and could have gone to bed before seemingly endless hours of awards given to shows you’d never watched and people you’d never heard of took over the night.

And then came the Hall Of Fame. This is a modern Logies highlight – the award where the Logies gives a banging gong to someone who would never have mustered the votes for the Gold in their golden days. This year it went to retired ABC luminary Kerry O’Brien, who took no prisoners in a belter of a speech.

"Can I just say how glad I am to not be receiving this award posthumously," he offered.

He decried "a desire to punish" the public broadcaster.

He lamented "an ideological obsession" with the ABC.

He implored his former ABC colleagues: "Keep you heads held high … don’t ever again allow politicians to diminish the public broadcaster … it is one of the most precious institutions we have."

No doubt, not everyone was impressed.

Gleeson upended the Gold contest last year when he mounted a campaign in favour of Grant Denyer – the diminutive and often-cancelled game show host and weatherman who would never have come within cooee of a Gold Logie had Gleeson not taken him over the line as a gag.

This year, the Hard Quiz host elevated that to a campaign on behalf of himself. His fellow nominees were peeved. But among them, he will be the one with a useful legacy: he killed the Gold Logie.

"I am not the most popular person on Australian television, I know I’m not … but I do host the most high-rating game show in Australia. Somewhere in the joke people forgot that … this is mine. Turns out I’m just really good at manipulating people in the media to do things for me. Which if you think about it, is why we’re all here. So maybe I deserve this award."

Gleeson rarely removes his tongue from his cheek, and he managed to nail both the glory and the gory of the moment: no one will ever take the honour from him, but no one will ever be able to say he didn’t recognise just how silly it is.

Having wreaked havoc on this ceremony two years running, long may Tom Gleeson reign – or perhaps for just one year.

Because the Logies do have their place. Rid them of the national joke that the Gold Logie has become and let them survive as awards of excellence.

Tom Gleeson would still win one, but he wouldn’t be making fun of it. That would be gold.