Leah McSweeney isn’t the only cast member from The Real Housewives of New York City who is annoyed with Ramona Singer’s pandemic behavior. News that Singer and her daughter tested positive for COVID-19 antibiotics produced cryptic “eyerolls” on social media from both Luann de Lesseps and Dorinda Medley. 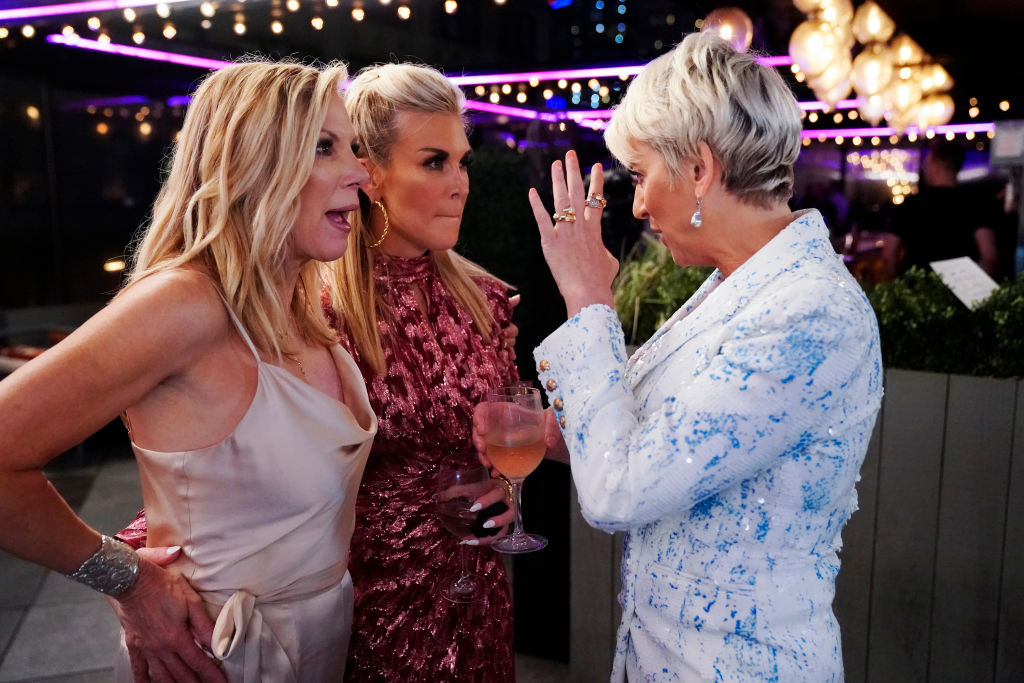 Medley and de Lesseps responded to a Page Six Instagram post about Singer’s antibody test. “#RamonaSinger revealed that both she and her daughter Avery tested positive for COVID-19 antibodies around the same time she also was diagnosed with Lyme disease,” according to the post.

Ramona Singer is criticized for being careless

Some fans and the cast have criticized Singer for not being careful during the pandemic. Singer prepared to appear on Watch What Happens Live with Andy Cohen from her Florida home and shared a photo. Her stylist wore a mask, but she did not. “Of course your stylist is wearing a mask to protect you but you aren’t wearing one to protect him. So nice,” one person commented.

She later added another snap with a mask, but she’s holding it away from her face. Medley responded, “Why you wearing a mask now? First time. #damagecontrol.” Singer rested and relaxed in South Florida with her daughter and ex-husband while people in New York were under extreme lockdown conditions. She returned to New York in June just as a shift occurred between hotspots. Infection rates dropped in New York, while they spiked in Florida.

Getting glammed up to go on with @bravoandy @bravowwhl tonight with @pamelaanderson. I love wearing my night gowns around my home !

Her Instagram posts lit up again with criticisms upon learning that Singer tested positive for the antibodies. She shared a photo of what she made for dinner in the Hamptons and fans wondered if she quarantined upon her return. “You should have quarantined yourself after Florida. Stop telling people to be safe when you clearly aren’t,” a follower wrote.

McSweeney was already heated about Singer’s behavior even before her antibody announcement. When Singer shared she was returning to Florida, McSweeney shared an Instagram video slamming Singer for flitting back and forth. “I am so disgusted by some of my castmates and their families who spent the entire f**king quarantine in Florida, living it up, showing everyone how they’re living it up,” she said, Page Six reports.

“Then Florida of course faces surge. They f**king come back to New York and they’re out like nothing,” she continued. “Not quarantining. Not taking this sh*t seriously. And basically laughing in all of our faces.”

RELATED: ‘RHONY’: Dorinda Medley Says Ramona Singer Is ‘Terrible to Her Fans’ After Being Told She Needs Anger Management

Singer didn’t think she did anything wrong. “My family and I quarantined in Florida for more than three months to stay together during this crisis,” she told Page Six.

“It was the best thing we could have done for one another and I am so fortunate that my ex-husband [Mario] offered for us to stay with him,” she added. “It was always the plan to come back to New York at this time and we took every precaution possible while traveling. The continued health and safety of my family, friends and community is of the utmost importance to me.”