It's a time-honoured genre that usually pops up around Hollywood award season each year: the prestige cinematic literary adaptation. But for every one that succeeds in being vibrantly true to the book and a richly dramatic entity all its own – think Gone with the Wind, One Flew Over the Cuckoo's Nest and No Country for Old Men – there are also memorable misfires, like The Lovely Bones, Extremely Loud and Incredibly Close and Bonfire of the Vanities.

So director John Crowley was understandably nervous when asked to give the big-screen treatment to the much-lauded 2013 art-mystery novel, The Goldfinch. Eleven years in the writing and 784 pages long, the book reignited the cult of author Donna Tartt, which began in 1992 with her debut novel, The Secret History. The Goldfinch, a beautifully wrought coming-of-age story, also won the 2014 Pulitzer Prize for Fiction, the Andrew Carnegie Medal for Excellence in Fiction and spent more than 30 weeks on The New York Times Bestsellers List. 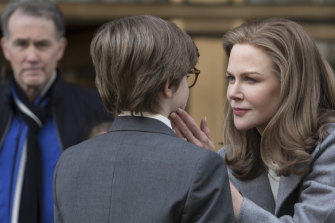 Nicole Kidman in The GoldfinchCredit:Warner Brorthers

The 50-year-old Irish filmmaker was no stranger to the genre with his 2014 film, Brooklyn – based on his compatriot Colm Tóibín's novel of the same name – earning three Academy Award nominations; Best Picture, Best Actress (Saoirse Ronan) and Best Adapted Screenplay (Nick Hornby). But the sheer mass of this book posed a new challenge. "My great fear with a film of this book was that it would feel like a slightly breathless gallop through the events of the book and a 'greatest hits' collection, rather than a dramatisation of it," Crowley acknowledges while attending the recent Toronto Film Festival premiere of the film, where it received mixed reviews.

"But, by focusing on two time periods within the book, spaced fourteen years apart, and letting go of the linear structure that Donna had achieved so brilliantly, it allowed us a cinematic way in, suggesting that the past is sitting on top of the present's shoulders all the time."

The Goldfinch follows thirteen-year-old Theo Decker (Oakes Fegley) in an odyssey of grief, guilt, reinvention and redemption after he loses his mother in a terrorist bombing at New York's Metropolitan Museum of Art. Following the tragedy, he's taken in by the wealthy Barbour family (Nicole Kidman plays the strangely detached Mrs Barbour) and then forced to live with his deadbeat dad (Luke Wilson) in Las Vegas. But as he grows up (Ansel Elgort), Theo finds his life cursed by a talisman he took from the museum rubble; The Goldfinch. The small 1654 painting of a chained bird by Dutch painter Carel Fabritius is a real work of art housed at  at the Mauritshuis museum in The Hague in the Netherlands. It also partially inspired Tartt's novel after she learned it survived a  gunpowder explosion that killed its creator in 1654. The movie also stars Luke Wilson, Jeffrey Wright, Sarah Paulson and rising Australian actor Ashleigh Cummings. 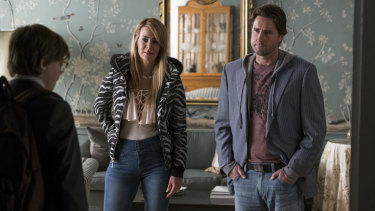 An exploration of loss and grief: Oakes Fegley, from left, Sarah Paulson and Luke Wilson in a scene from the movie.Credit:Warner Brothers Pictures

"I had read the book for pleasure and didn't read it with a view to anything cinematic, so the power of the book worked, like any great novel, on me," says Crowley."It felt to me like a very original study in grief. It's a brilliant bind to put him in; a young boy who begins to fuse his grief with this object that happens to be a priceless work of art and the longer he holds onto it, the more criminality he creates in his life."

Nicole Kidman did not  read The Goldfinch  until she was approached to play Theo's aloof guardian. "The challenge for me was her quietness and stillness," she says over a cup of tea with honey, a few hours before the premiere. "She's fighting her desire to let another child into her heart but as that child shows a love for art and the things that she loves, along with the stoic way in which he deals with his trauma, she finally connects with him." 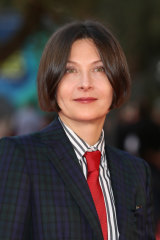 Oakes Fegley, 14, and Ansel Elgort, 25, both play Theo over the course of the film but Kidman appears in each timeline with each actor and aged up with extensive makeup in latter scenes.

"Particularly in this film, I see my mother staring back at me and it's startling," she says. "But it's lovely when you are given that opportunity to be a chameleon and it's what I'm always hungry for as I continue on my creative path."

Both Fegley and Elgort say they leaned heavily on the book to research their roles. Elgort, whose films include Baby Driver and Divergent, adds, "It was interesting on (the 2014 film) The Fault in Our Stars, writer John Green, was on set and very often the director was humble and didn't mind if we went right to the writer and said, 'what do you think of that?' With this film, Donna Tartt wasn't involved at all, and even at times where there was a detail in a scene and I'd say, 'but in the book this happened', John (Crowley) would say, 'that's the book, this is the movie.'"

Fegley, who starred in the 2016 Disney film Pete's Dragon, says he read the book as soon as he got the role. "It was a great tool for me, especially for the Las Vegas portion of the story, because of all the descriptive adjectives that Donna uses and the story being written in the first person, so I could really get behind his eyes and think what he thought." 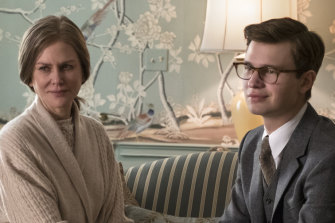 Nicole Kidman and Ansel Elgort in The Goldfinch: ‘I can see my mother staring back at me.’Credit:Warner Brother Pictures

Kidman has a lifelong passion for reading: "I was allowed to stay awake at night reading with a flashlight after lights were out."  Through her production company, with Per Saari, Blossom Films, she is capitalising on the current thirst for literary adaptations in film and television, convincing Sydney author Liane Moriarty to assign the rights to her bestsellers Big Little Lies and Nine Perfect Strangers to her and Reese Witherspoon.

Kidman also executive produced and starred in the mini series The Undoing, based on Jean Hanff Korelitz's bestseller You Should Have Known, and is is currently adapting, for Amazon, Janice Y.K. Lee's celebrated novel, The Expatriates, (described by The New York Times as "a female, funny, Henry James in Asia"), working with Australian scriptwriter Alice Bell (The Beautiful Lie, The Slap). Meg Wolitzer’s feminist bestseller The Female Persuasion is also part of Blossom Films’ first-look deal with Amazon.

When Kidman is home in Nashville with her musician husband Keith Urban and their two daughters, Sunday, 11, and Faith, 8, she has more time to indulge her bookish nature. "I have three piles of books next to my bed that I'm always thinking, 'I have to organise that' and then I go through it and go, 'no, I am reading that' or 'no, I will read that' or 'no, I'm not going to put that on the shelf yet."

"I also listen to books on Audible when I'm running or walking our new dog, but I still really love actual print books, and so do my kids. [Novelist] Ann Patchett owns an independent bookstore in Nashville called Parnassus, so we make regular family trips to buy books together and it's a lovely ritual."

Asked her favourite recent reads, Kidman replies: "I'm in the midst of reading Three Women (by Lisa Taddeo), which is intense and heavy, and I loved Becoming because I love Michelle Obama. I've also just read a book called Untangled (by Lisa Damour), which deals with teenage girls and guiding them through the transition into adulthood … and that's on my horizon and I recommend it!"

The Goldfinch opens in cinemas on September 26.