The Handmaid’s Tale’s third season isn’t even over yet, but Hulu just renewed it for a fourth, so it looks like we’re not getting out of this dystopian nightmare anytime soon!

What the hell is going to happen to Nick? Is June ever going to get out? Do the Waterfords ever actually get Nichole back? There are so many questions that need to be answered and the season isn’t even done.

Here’s everything we know about season 4, which is admittedly not that much…yet.

There‘s going to be one

Okay, yes, so you probably deduced that based on the headline for this article, but the news is finally official that Handmaid’s is getting another season. Thank god, praise be, let the lord open, etc.

It was announced literally today, which means the process of actually creating the new season probably hasn’t started yet. Basically, that means we have a long way to go before we actually see it. That’s okay though, because there are still three episodes left in the current season.

Without having seen the end of the third season, it’s hard to tell who will be coming back. Like, what if a major character dies in the finale? We literally don’t know. That said, it’s probably safe to assume the major players are returning until you hear any news otherwise. That means the tension between June, Serena, and Fred will probably live to see another season. 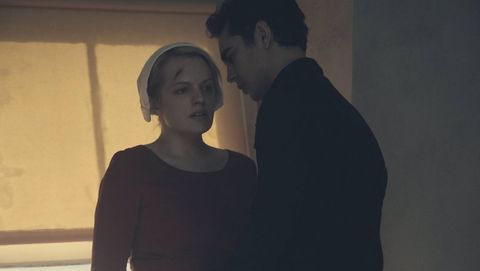 The new season has some major questions to answer

Throughout the last few episodes, the show has raised a lot of questions that it has not answered. Mainly, how the hell do the D.C. handmaids eat? And why does no one on this show have a Boston accent?

Hopefully, we’ll get some answers next season to these totally irrelevant yet still confusing questions.