Good Morning Britain returned to television screens this morning for the midweek instalment and Piers Morgan and Susanna Reid were back presenting the show. Joining them live in the studio was Rory Stewart MP to discuss what the Prime Minister’s next move could be following the Supreme Court ruling yesterday. However, following the interview, conversation turned to joking about the politician’s GQ award and after receiving an insult from Morgan, Stewart thought the interview had ended and got up to walk out of the studio leaving the hosts extremely surprised.

During his appearance on the show, Stewart spoke about the Supreme Court ruling, a Brexit extension and the Labour Party’s plan to abolish private schools.

At the end of his interview, Reid brought up the last time they saw one another; on stage at the GQ Awards 2019.

“You’ve had the old GQ curse,” Morgan added. “Because I was made GQ’s Editor of the Year and later GQ’s TV Personality of the Year, both cases I lost my job that I got it for within several months.

“Rory, welcome to the GQ men of the year curse! You managed to lose yours before you even got up on the podium,” he joked. 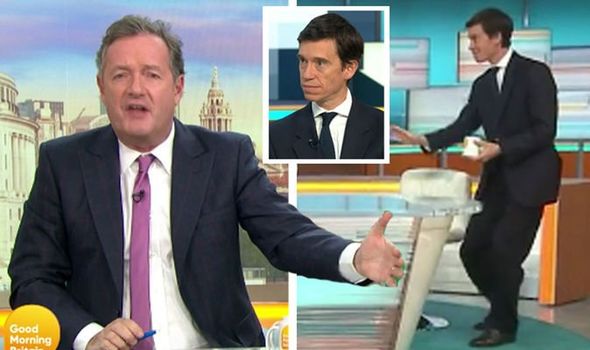 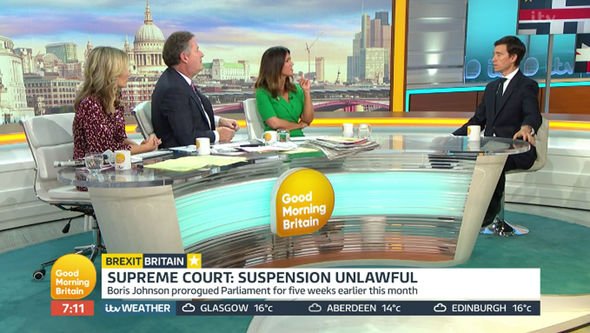 “Good to see you!” Reid remarked and Stewart replied: “Thank you, goodbye guys.”

Those watching at home then Rory collect his teacup and get up out of his chair, surprising the presenters.

“Oh! He’s off!” Reid stated and Stewart turned around and stopped, not knowing whether he should walk back towards his seat or carry on.

“You’ve got a busy morning in Parliament, we do not want to hold you back,” Reid continued. 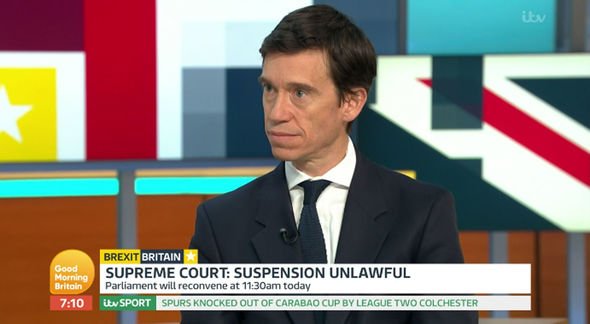 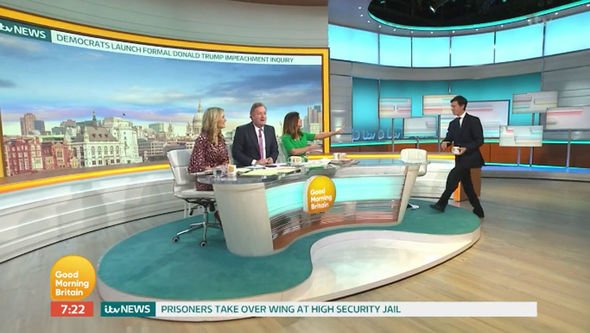 “No waiting for Rory!” Morgan said.

It comes after yesterday afternoon when the Supreme Court ruled it was impossible to conclude there had been any reason – “let alone a good reason” – to advise the Queen to prorogue Parliament for five weeks in the run-up to the Brexit deadline of 31 October.

Today, Boris Johnson is flying back to the United Kingdom early from a UN summit in New York and faces calls to resign from opposition groups.

Stewart, who had his Conservative whip removed after voting against the government to give power to rebel MPs to block a no deal Brexit gave his opinion on Johnson’s current situation and was asked what he thought the Prime Minister should do if he was in his shoes.

“It’s completely mad,” he stated to the presenters. “It’s deeply shocking, I’m a Conservative because I believe in our Parliament. I’m horrified, he should as a Conservative be showing some respect to the Supreme Court’s ruling.”

Reid asked: “Should he [Johnson] resign?”

“I think in his position he should resign, bring back the power to the British courts and Parliaments.”

“Johnson took advice from the Attorney General, who said [proroguing Parliament] was lawful. If that is true, he had take legal advice from a lawyer, has what Boris has done still scandalous?” Morgan questioned. 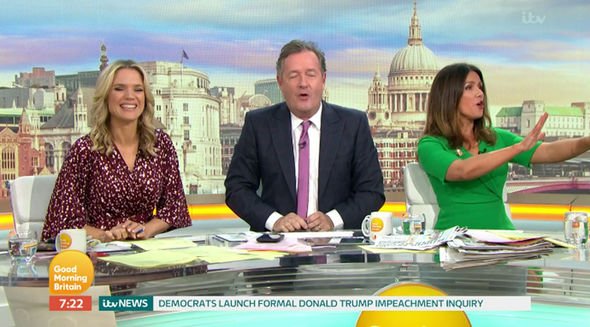 “Anyone taking legal advice needs to look the principles at stake,” Stewart argued. “He tried to suspend and muzzle Parliament to stop them debating the biggest issue.”

“Will he have to resign if he can’t get a deal or won’t ask for an extension? Will he defy Parliament and bring the UK out of the EU without a deal?” Reid suggested.

“He’ll keep rolling, it’s deeply shocking,” Stewart argued. “If an extension is granted he will claim he didn’t want it in the first place.”

Conversation then turned to the oppositions suggestion to abolish private schools.

The Labour Party has revealed plans to get rid of private schools, suggestion they make no financial sense and will not benefit children left behind by the education system.

The plan would see the assets of private schools “redistributed”.

Morgan wanted to find out what Stewarts thought was on this matter considering he was educated in a private school.

“It’s mad. There are amazing schools, people all over the world come here [for education]. We need to balance it [private schools] with a really good eduction system,” Stewart suggested.

Good Morning Britain airs weekday mornings at 6am on ITV.