If you can’t take the kitchen, get out of Fox’s primetime. On Wednesday, the Season 11 premiere of “MasterChef” — a “legends” season — was strong enough to carry Fox and “Crime Scene Kitchen” to a first-place finish among adults 18-49.

Of course, it helps that Fox, unlike its “Big 4” competition, doesn’t schedule the relatively low-rated 10 o’clock hour. Even so, Fox finished fourth last night counting viewers of all ages.

ABC finished first in terms of total-viewer averages last night, drawing 3.09 million from 8 p.m. to 11 p.m. NBC was close behind with an average of 3.06 million total viewers. 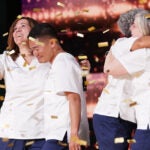 Fox was first in ratings with a 0.5 rating/4 share in the advertiser-coveted 18-49 demographic, but fourth in total viewers with an average of 2.1 million, according to preliminary numbers.