[Editor’s Note: The following review contains spoilers for “Mare of Easttown” Episode 7, “Sacrament,” including the ending.]

Two seemingly contradictory elements from the two loosely tied sides of “Mare of Easttown” found harmony in HBO’s buzzy crime drama. The first element is the red herrings, or as my editor begged me not to call them: the red mareings. (I’m sorry, but I cannot resist.) Creator and writer Brad Inglesby absolutely littered his seven-part limited series with clues, many of which eventually proved misleading, in order to create an addictive whodunit for viewers at home. The second element, which runs very much in opposition to the first, is closure. If the audience feels too jerked around during their extended search for the killer, a murder-mystery is bound to fall apart, no matter how shocking the big reveal.

But the actual case is only one side of “Mare of Easttown,” and leading into the Episode 7 finale, closure had already started for our titular hero’s personal journey toward salvation. Mare (Kate Winslet) bottomed out as a cop and a person when she placed drugs on her former daughter-in-law, Carrie (Sosie Bacon). Since then, she’s pulled herself up by her (literal) bootstraps through counseling and good, old-fashioned police work. As her therapist said this week, if she had been using her cases to hide from her own grief, than addressing her son’s suicide encouraged her to confront the truth at work, as well. Mare couldn’t ignore the past, no matter how painful, and she couldn’t ignore what she learned in the present for the very same reasons.

The murder-mystery and human drama went hand-in-hand for Mare, and they ended up balancing out “Mare of Easttown,” too. For as preposterous as the truth may sound, sans context — “the kid is the killer?!” — Episode 7, “Sacrament,” managed to tie up far more of its loose ends than I ever expected, and in ways that proved more and more satisfying on subsequent viewings. Bolstered by wrenching human performances (shout-out to Julianne Nicholson, HBO’s supporting MVP in “Mare” and “The Outsider”), the ending avoided going off the rails — a la the crash-and-burn hysteria of “The Undoing’s” atrocious conclusion — and even proved more moving than a show with this many fake outs has any right to be.

Really, it’s worth noting just how many there were, if only to understand just how many were given proper explanations. Over the first six episodes — and even into the finale — the sheer number of red mareings tossed out could’ve kept Easttown fisherman busy ’til winter. There was the prowler spotted by the Carrolls in the series’ opening scene. We witnessed first-hand Brianna Delrasso (Mackenzie Lansing) beat the shit out of Erin the night she died. For more than 70 percent of the season, Katie Bailey’s kidnapping clouded everyone’s focus on the murder investigation, making it a little hard to believe Wayne Potts (Jeb Kreager) had nothing to do with the subsequent homicide. Richard Ryan (Guy Pearce) was a nice (too nice?), if libidinous (foreshadowing betrayal?), suitor who entered Mare’s life at the right (suspicious?) time. Dylan Hinchey (Jack Mulhern) was such a dick, threatening Jess (Ruby Cruz), burning evidence, and generally acting like a violent asshole. The implied pedophile Deacon Mark Burton (James McArdle) threw Erin’s bike in the river, Billy Ross (Robbie Tann) was caught covered in blood the night of the murder, and you’re telling me none of these people actually killed Erin?!

It takes a certain level of audacity to cast out this many misdirects and still believe you can reel in an ending that’s both surprising and satisfying, but gosh darn it, Ingelsby pulls it off — and with “The kid did it” as his ultimate hook. Yes, Ryan Ross (Cameron Mann) is the killer. The pissed off son of John (Joe Tippett) and Lori intercepted a text meant for his father, who was having an affair with Erin (as proven by the photo teased last week), and went to the woods to threaten her, hoping scaring off his dad’s latest mistress would keep his parents together. Things went awry, John and Billy were called in for clean-up, and the rest is history. Pinning it on the child is an inherently tricky endgame for any crime thriller, and a certain level of incredulity can be expected at the outset. When Mare first hears that Ryan is the one mowing Mr. Carroll’s lawn, even she exhibits a mix of irritation under her heartbreak, as she watches Lori’s kid, on video, emerge from the woodshed. But Ingelsby convincingly builds Ryan’s conviction from there, letting the young boy confess in his own words while simmering tension zips across the interrogation room between Mare and the best friend who lied to her — between Lori and the best friend who put her family in prison. 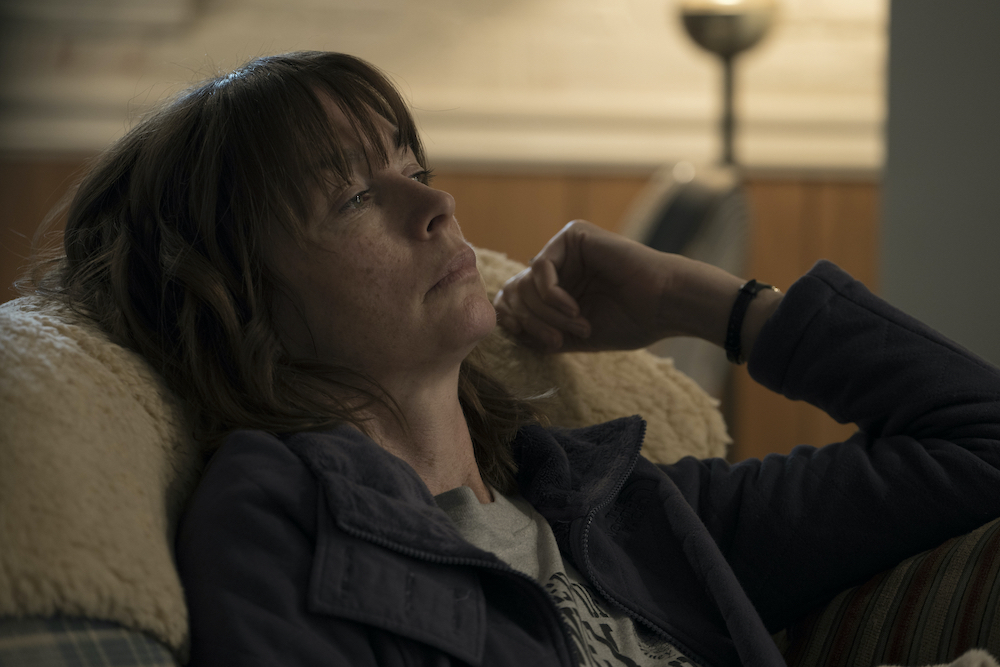 Julianne Nicholson in “Mare of Easttown”

The anger and hurt shown by both sides over the coming days and weeks is what helps land “Mare’s” emotional conclusion. Both sides feel wronged, both women felt like they knew the other better than to expect that, and their immediate volatility is as understandable as their eventual tenderness is cathartic. After all, it wasn’t that long ago (Episode 4) that Mare was leaning on Lori, distraught and lost, admitting she was pushing away everyone close to her. Lori says she’ll never abandon Mare, no matter what, and in the finale, she doesn’t — granted, it’s more of a role reversal where Mare could’ve run away from Lori, and instead had to exhibit the same level of loyalty.

Still, this is just one way Ingelsby and the whole “Mare of Easttown” team managed to address the many, many lingering loose ends. Wrapping up the kidnapping arc, Katie Bailey (Caitlin Houlahan) gets a happy ending, inheriting the house Beth Hanlon (Chinasa Ogbuagu) couldn’t bear to own after her brother’s death; DJ gets the ear surgery that was vehemently debated in Episode 1, via a finale scene where we also see Lori struggling to accept being the mother to her husband’s illicit son; Richard Ryan rides off into the sunset, teasing a hopeful, if noncommittal, future with Mare and remaining the easy, breezy presence she could use right now; even the prowler comes back around when Mr. Carroll calls Mare in about his once-missing gun, and also tries to find his own path forward, through her guidance, after the death of his wife.

Looking back on the first episode, which spent so much time introducing characters and so little time on the mystery, it’s impressive to see how many storylines circled back around to become vital moments in the series. That’s good groundwork for a murder-mystery, but it’s also good groundwork for a character drama. Not every arc worked — it’s still unclear if Easttown should really welcome back the Deacon, considering those old charges from his former parish, and Dylan’s big donation for DJ doesn’t fully excuse threatening Jess at gunpoint — and all those red mareings coupled with Mare’s traumatic flashbacks could skew the pulpy mystery-drama into melodrama (not to mention the on-the-nose final shot of Mare crawling into the attic). Still, it’s worth applauding how “Mare of Easttown” ultimately honored both sides of itself, especially after recent other forays into similar territory came up empty twice over. More series should work this hard to marry their ambitions. Ambition, at work and at home, is always welcome.

“Mare of Easttown” is available to stream in full via HBO Max.