Love Island retuned to ITV2 tonight and viewers tuned in to see Joanna Chimonides dumped from the show following a shock decision made by the other contestants.

However, some of those watching at home branded the move a ‘fix’ to allow Michael Griffiths and Amber Gill to get together.

Last night, Caroline Flack stormed into Island Club and disrupted the party with a dumping announcement.

She then went on to reveal how Anna Vakili and Jordan Hames, as well as Joanna and Michael were the least favourite couples as voted by the public.

The other five couples then had to choose between the two, of who to keep and who to send home.

But the twist was only one person would be leaving, after debating amongst each other, the majority decided Joanna should pack her bags and head for home.

“Really? #LoveIsland Producers – what a hash job! So fake! I’m sure I saw Michael and Amber happy, smiley and dancing together on Saturday /“unseen” bits at Craig David party! The whole show is a fix. FIXED!” One claimed.

Someone else commented: “Love Island producers wanted Michael to go back to Amber even if he doesn’t want to. Everything is staged and a fix #LoveIsland.”

“Such a fix that Michael is single again, producers 100 per cent made that happen for the Amber drama #LoveIsland,” a third chimed. 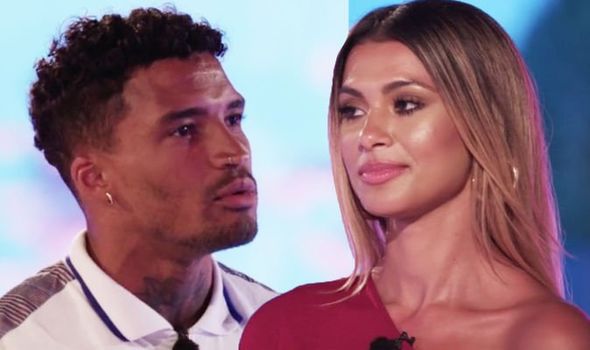 Express.co.uk contacted ITV for a comment on the claims and they reiterated the statement: “The show is not fixed”.

It comes after Joanna expressed a strong opinion about Michael staying in the villa and not leaving with her by his own choice.

After saying he was confused about what she wanted, Joanna left the argument with: “I’m going to go. You need to stay here.”

Reflecting on his decision to stay and take part in the show, Michael tried to look at the positives and said: “I am looking forward to leaving and meeting her. This is a test of us being separated.”

Harley, a 20-year-old estate agent from Newcastle has said she has her eye on Ovie Soko.

“I think Ovie is absolutely beautiful, he is stunning so he is basically my perfect man,” she revealed. “I also think Anton [Danyluk] comes across really funny so I’d be open to getting to know him.”

While India, a 28-year-old model from Reading also has her eye on Ovie, but she also thinks “Michael is good looking”.

Do you want Amber and Michael to get back together?

As for Greg, the 24-year-old professional rugby player from Limerick is keen to get to know Maura.

“I’d say me and Maura will hit it off straight away,” he explained. “Being two Irish people and she’s hilarious.”

Love Island airs every night at 9pm on ITV2.