Kevin Costner doesn’t know why viewers are flocking to “Yellowstone.” He doesn’t break his projects down as “intellectual” or “psychological” experiences. They’re emotional journeys, and the characters guiding them are his primary concern. So if, say, his character in the Paramount Network western, John Dutton, is behaving inconsistently, that would be a problem.

“When I see behavior that’s off, it bothers me,” Costner said to IndieWire. “Maybe a sociopath watching a film goes, ‘I know who the rat is,’ and you think, ‘Yeah, [because] in your own life, you’re a rat.’ You just don’t recognize it in yourself. I have to look at John and understand — outside the character — ‘Hey, you just crossed a line. There’s no going back from that. You sanctioned a killing.’ You can inform the storytellers, the creators, that, ‘Look, we’ve just done that, and now we have to make sure we deal with it honestly.’”

For the betterment of the show and protection of its viewers, Costner is a watchdog for any kind of unjustified behavior — not unjust behavior, mind you. As referenced above, he’s well-aware John Dutton, a powerful rancher who controls the largest contiguous swath of farmland in the United States, has made mistakes. With great power comes great risk and dangerous choices, especially in the spacious lands of prestige TV, and it’s here where Costner bucks a bit. While he knows what John has done on the show so far, he doesn’t know all of his backstory — or where it’s going.

“I would like to, but I’m not always privy to it, no,” Costner said. “Sometimes with [John’s] sons or wife or whatever, that’s been really kept in a creative ball. That’s a more vulnerable way to go through life as an actor.”

Not knowing a character’s origins or what comes next is fairly typical for television actors. Some producers restrict access to scripts in order to avoid actors spoiling storylines they’re not a part of, like with “Game of Thrones,” while others merely haven’t figured out what the end of a season or series will be when they have to start production — this is very common for broadcast shows, but still prevalent elsewhere.

Prior to “Yellowstone,” Costner’s only forays into the medium were in one-and-done roles — long before he broke out on the big screen — and then later, in the three-part miniseries, “Hatfields & McCoys.” In that and in the movies, an actor knows what’s going to happen next. In “Yellowstone,” much like the ranching life it depicts, you don’t.

“It hasn’t been an easy adjustment for me,” Costner said. “I don’t like it too much.”

During Season 1, Costner would talk to writer-director Taylor Sheridan about John’s journey, but those conversations have gotten trickier as Season 2 shifted from a singular writer and director to a more traditional television production. “We’ve dealt with things,” Costner said of his conversations with Sherdian, “but this second season was a combination of a writers’ room and him, so that wasn’t exactly clear. Now it’s just a straight writers’ room.” (Sherdian and producers were unavailable to comment on this story.) 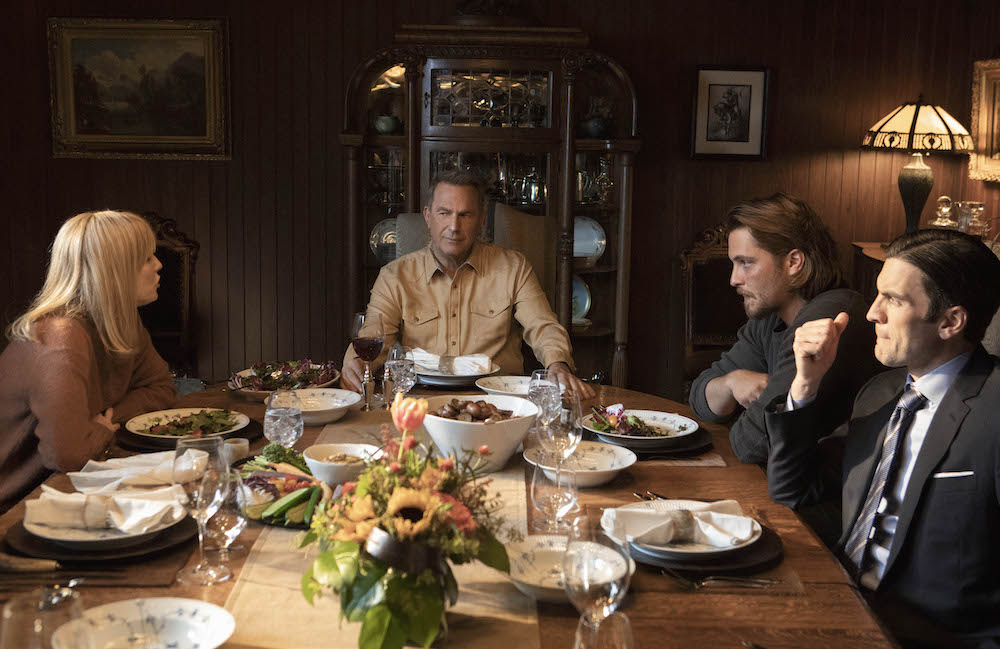 Adding to the actor’s challenge, the second season has also brought about great change for John Dutton. [Editor’s Note: The following paragraph contains spoilers for the “Yellowstone” Season 2 premiere.] After a ruptured ulcer almost kills him, John questions what he’s been doing with his life and swears he has “so much to undo” with his family, ranch, and maybe more. When asked if this means John is a changed man, Costner seems skeptical.

“I think so, yeah — he should be. When you say things like that, then you have to follow up that way. If you start doing things different than that, then [the viewers] don’t believe you,” he said.

The hard part, as Costner repeatedly brings up, is getting viewers to keep investing in the storytelling as John shifts back and forth between a man who’s done bad things and a man seeking to make up for them. Costner isn’t sure if John is capable of finding redemption — “you can’t come back from certain things you’ve done” — or if he can even find a worthy heir to take over his ranch. “I don’t think there’s anyone there capable of that,” he said.

Costner doesn’t even know if there’s any way John can be satisfied at his story’s end.

“I don’t see that path,” he said. “If [John] keeps making these same mistakes, people will lose faith in who [he is], even as a character. The show has to watch out for that, but in real life and in real movies, you know what you’ve done, and you just try to do the best you can. If you just keep repeating yourself, then it’s like a friend you want to like, but you don’t respect them.”

With repetition already a concern, one has to wonder how long “Yellowstone” can keep going. Two 10-episode seasons are already in the can, and Season 3 was picked up prior to the latest premiere. It continues to perform well in the ratings, as the Season 2 premiere gained viewers overall and in the key demo. It’s a hit on a new network, or at least a network that’s recently gone under rebranding, and no network can afford to lose hit shows right now.

Still, Costner pushes caution. If “Yellowstone” burns through story or betrays its characters, audiences could ride off into the sunset. “If your foot’s on the gas, you can run into a wall,” he said. “Something can run quite a while if the architecture of it is careful — not explosive, but careful. You can run a long time if you make things really compelling, but that’s a really hard thing to do. It takes a lot of thought. It’s not impulsive writing. It’s writing with a lot of extended thought.”

As for Costner, he’s already looking to move from in front of the camera to behind it.

“I’m going to play the second half of my career out directing, but it could very well be in television,” he said. “But it won’t be making it up as you go. The architecture has to be there. I’m more about that. Listen, a lot of my movies are long. I like the subplots. I like it when it all comes together — [but not when] it’s made up on the fly. I don’t trust that.”