Kelly Dodd is making waves again. The outspoken Real Housewives of Orange County personality has always been vocal about any issues that rub her the wrong way. She’s lashed out on more than one occasion, especially toward her RHOC castmates.

After her recent wedding to Fox correspondent Rick Leventhal, Kelly seems to have doubled down on her beliefs and she doesn’t hesitate to let the world know it.

Kelly says she’s not a ‘sheep’ like other RHOC housewives

In a recent post to Instagram, Kelly shared a video of her new husband as he spoke on Fox News about changes to COVID-19 restrictions across the country.

It didn’t take long for followers to jump into the comment section, completely divided on how they felt about Kelly and her opinions.

One particular comment seemed to hit a nerve with Kelly.

It read, “The only RH [Real Housewife] that isn’t a sheep like the rest of Bravo peeps. FINALLY! Love it. [praise hands emoji][flame emoji].”

Never one to resist the opportunity to take jabs at her castmates, Kelly responded by taking direct aim at her co-star, Shannon Beador and wrote, “That’s why I haven’t been [on] Wwhl but @shannonbeador will be on twice next week..” 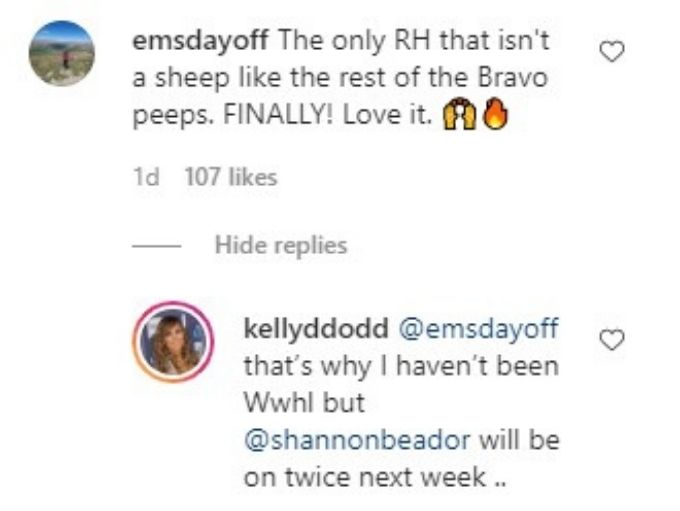 Some praised Rick for how well he did, with one particular comment stating, “Ahhhh he crushed it!!”

Another said, “Yesssssssss love Rick and Tucker! And you obvi[ously].”

Others commented on their appreciation for Rick as a reporter.

“Please let your husband know his unbiased reporting is valued. A true journalist! And Kelly loving you on The OC – you seriously crack me up! [heart emoji],” said one follower.

Other followers shot back with disagreement.

“Unbiased? [laughing emoji] wow the stupidity here is remarkable,” said a comment in rebuttal to the first. 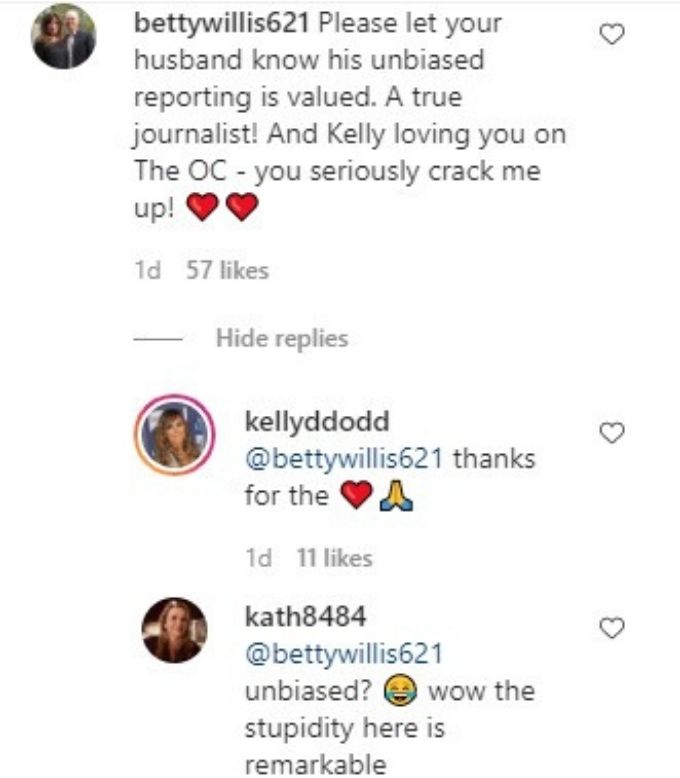 Some followers have just had enough of Kelly in general, with one person commenting, “Fade away Kelly.”

Kelly constantly finds herself in the limelight when it comes to controversy. And while she’s always been outspoken, some RHOC fans are saying she’s finally crossed the line this season. She’s pushed many boundaries and even Andy Cohen has given his thoughts on the matter.

Kelly has also come under fire recently for downplaying the global COVID-19 pandemic. Shortly before her wedding to Rick, Kelly shared photos from her bridal shower where many guests were seen not wearing masks. When confronted about this in the comments section of the post, Kelly defended herself saying that the survival rate for the virus was high.

But, it isn’t just the COVID-19 pandemic that has Kelly in hot water. She was also called out for being tone-deaf to the Black Lives Matter movement when she sported a hat that read “Drunk Wives Matter” at her bridal shower.

There is no lack of controversy when it comes to Kelly Dodd, and it seems that she might just like it that way.

The Real Housewives of Orange County airs Wednesdays at 9/8c on Bravo.