Shrek and Frankenstein's monster, with their green skin and lumbering bulk, might have been cousins. One is the posterboy for the creative and commercial success of the DreamWorks Animation studio, the other one of cinema's greatest horror creations, captured on transparent film by light-sensitive silver halide crystals in 1931 and transformed into an iconic figure of menace and terror.

And yet they are not so different, says DreamWorks Animation head of story Ennio Torresan. The heart of Frankenstein's story is not one of horror, Torresan says, but rather one of misunderstanding. "Frankenstein's monster is born in the movie, he comes to life in the movie and dies in the movie, you see is whole life in what, a couple of weeks?" Torresan says. "He's a child that looks like a monster. He can't communicate and people don't understand who he is." 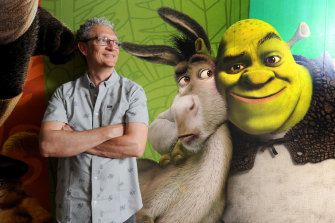 In the realm of animation, such misunderstanding forms the first stepping stones of the hero's journey, and it is here, in the courtyard of DreamWorks Animation, tucked away in a sun-baked corner of LA's San Fernando Valley, that we are greeted by a statue of Frankenstein's distorted mirror image, his brother-from-another-genre, the grumbling but ultimately lovable troll who wins Princess Fiona's heart.

Brazil-born Torresan came DreamWorks via London, where his hand-drawn short El Macho landed him a job at Steven Spielberg's Amblimation. He joined DreamWorks in 2002, working on the Madagascar and Kung Fu Panda franchises, Boss Baby and the upcoming film Abominable. While most animators talk passionately about influences within the technique of animation, Torresan's earliest and most enduring influence is James Whale's 1931 aforementioned masterpiece, Frankenstein. 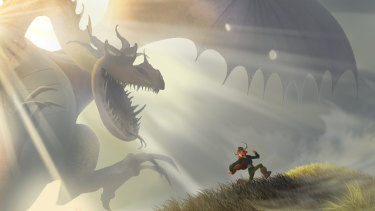 Pierre-Olivier Vincent’s artwork from How to Train Your Dragon (2010).Credit:DreamWorks Animation

"I was traumatised, completely traumatised, but the storytelling and the drama, the caricature of that movie really played a big part in [my interest in animation]," Torresan says. "From that point on I started reading comic books and picture books. I started to interfere with those stories, and tried to change them," Torresan says. "Then I saw Bambi, then Chuck Jones and Tex Avery [who developed the Looney Tunes and Merrie Melodies shorts, which featured characters such as Bugs Bunny, Daffy Duck and Porky Pig] and then European films. They completely changed the way I would see movies."

Torresan is sitting in a corner workroom deep within the animation building on the labyrinthine studio lot. The site is equal parts university campus and Adobe architecture-influenced community, with a grand fountain in its centre (with an enormous Shrek statue standing watch nearby), gardens and lush, green parks and floors and floors of animators, working by hand and with technology, on the studio's production slate.

Australian audiences will meet the characters who populate those stories on two fronts this month, in the National Museum of Australia's DreamWorks Animation: The Exhibition, which features static and interactive artefacts from films such as Shrek, Trolls and How to Train Your Dragon, and with the release of the studio's newest film, Abominable, the story of an orphaned Yeti named Everest who, with three human friends, Yi, Jin and Peng, undertakes a dangerous expedition home.

The latter represents a significant milestone in the history of animation: Abominable is the first animated feature from a major studio "helmed" – that is, written, directed and creatively led – by a female animator, Jill Culton. 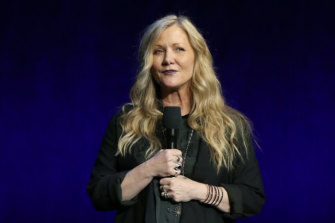 Animator Jill Culton is the first woman to ‘helm’ an animated feature from a major US studio.Credit:WireImage

A veteran of the animation industry for 29 years including gigs as animator, storyboard artist and designer, Culton worked for a decade at Pixar, on titles such as Toy Story, A Bug's Life and Monsters Inc., and since 2010 has worked at DreamWorks. Culton says she grew up with Disney films but "never saw myself as a princess that needed rescuing. I think I found myself as somebody who wanted to be the driver. The one that started the adventure."

Significantly, in an era where almost anything can be done with the click of a mouse, Culton is a great champion of old fashioned pen and paper. "The interesting thing about animation is that the beginning phases, from the development artwork to the character, those designs are all drawn by hand," she says. "When I write, because I come from an animation background, I start by doing sketches. Images I see in my head that might enhance the story, and when you get a development team on, they do the same. So this is still a very grassroots development process."

There are still a vast array of tools available to the animator, in particular a subset of tools which Culton says helped the creative team behind Abominable being a sense grit to the animation. "In Yi, we wanted a character who leaps before she looks, that is determined and independent, and has grown up in a city," Culton says. "And we wanted that city to feel like a city like Shanghai that has the traffic and the sounds and the drips and the roof top that she goes up on to at nighttime to play her beautiful violin. And it starts from a very grounded, gritty place." 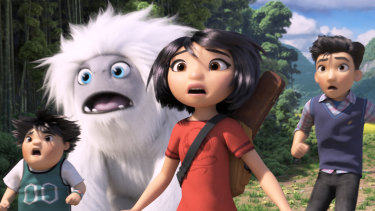 Abominable is led by Yi, who leaps before she looks.Credit:Dreamworks Animation

The twofold answer to the power of pen and paper, Culton adds, is that it "still starts with grassroots imagination on paper, so to speak. And the technology, where I feel like it's given us, is the ability to get more of that thrifty grit and less computer sheen into our movies," she says. "So the better the technology gets, the more we stopped thinking like, oh, this is a computer film. It's weird. It's allowed us the freedom, even though it's a technological advance. I want to feel like it starts with a grounded place."

Elsewhere in the building we meet production designer Max Boas, VFX supervisor Mark Edwards and head of the character animation department John Hill. Between them they have a raft of credits across Trolls, Turbo, Kung Fu Panda and the Madagascar and Shrek franchises for DreamWorks; Hill's work goes back to the 1985 Ewoks TV series and the animated series Star Wars: Droids, while Edwards has worked extensively in live action post-production, including gigs on CSI: Crime Scene Investigation and The Sopranos. 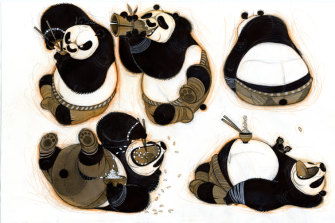 When the film's various elements begin to come together, a character like Everest the Yeti, much like Shrek or Po the panda from the Kung Fu Panda films, arrives in a surprisingly undeveloped state. Much of the development, Hill says, is informed by a combination of human and animal movement.

"With Everest, he's kind of designed like a gorilla but we didn't want to move him like a gorilla, and so he's kind of a combination of all sorts of animals, an Orangutan, a curious puppy, he could be a kitten, even though he weighs 2000 pounds, or a big, heavy bear," Hill says. The overall "look" of the production, and in particular its colour palette, falls to Boas.

"There's some commonalities with certain colours, warm colours make you feel warm, cold makes you feel cooler, so it's how you associate the mood and the emotional qualities with colour," he says.

Boas defines the specificity of a DreamWorks story as one which is grand in scope. "And they usually don't stray away from the drama," he says. "There's kind of a weight to it, which appeals to adults. I think it kind of breaks the age gaps, in that way. I think they're a little less sweet, maybe, than a Disney film, not as precious as a Disney film, I would say. There is humour, and edge, and drama. How to Train Your Dragon, all those films, [they] have that kind of weight and drama, they feel believable in a way." 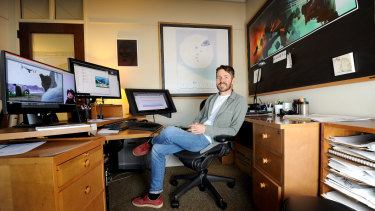 The more specific touches in the film that require special effects enhancement land on the desk of Edwards, who serves as VFX supervisor. For Abominable they include a Koi fish cloud sequence, a sequence in a vast poppy field and a blueberry-fuelled sequence which unexpectedly turns into something out of the Saving Private Ryan playbook. Each feels distinctly animated but equally influenced by real-world movement.

"We take visual inspiration for everything," Edwards says. "So whether it's photographs or art, some of the soft lighting was from found photographs. We look at styles and especially graphic design and that kind of thing for different assets. The Koi fish cloud sequence is inspired by time lapse photography of mountains, where basically you have these valleys and clouds are forming and it really feels like water pouring into the valley. And we thought wow, that's great, why don't we have our cloud Koi fish swimming in something similar." 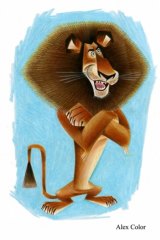 The exhibition delves into the creation of hit movies such as Madagascar (2005) illustrated by Craig Kellman.Credit:DreamWorks Animation

What is left behind when an animated film reaches the screen is a curious assembly of artefacts, from hand-drawn sketches to maquette statues representing the characters, and used by animators when crafting pencil sketches of certain sequences. The touring exhibition, which opens this month at the National Museum of Australia, features more than 400 unique objects from the studio's archive including concept drawings, storyboards, models, masks, maps, photographs, posters, paintings and other original artworks, from Antz through to Shrek, Madagascar, Kung Fu Panda, How to Train Your Dragon and Trolls.

For the director of the National Museum, Dr Mathew Trinca, the question is almost a philosophical one. Stepping out of the shadows of the traditional concept of the museum – think of the Museum of Egyptian Antiquities in Cairo, or the British Museum, whose cultural assets include the statues of Mausolus and Artemisia from the Mausoleum at Halicarnassus, or the Amitabha Buddha from Hancui, northern China – is an assembly of hand-drawn sketches and maquette statues within the purview of the modern museum?

"That gets to the very core of the issue for me, and the answer would be yes, precisely," Dr Trinca says. "In that context, the museum's last major summer show was on classical Rome, with collections that came from the British Museum, so this summer our attention turns to the popular culture of this age and you essentially see both are connected to the human impulse to tell stories. In the same way we might be interested in the cultures of times past, [we can also look] at our times and culture, in this case telling stories through animated film, which is emblematic of the age in which we live." 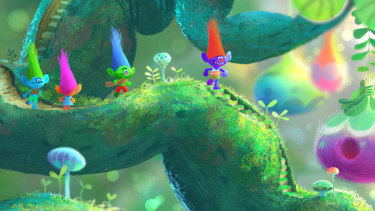 While the exhibition is creatively driven from the DreamWorks Animation campus, which curates the various elements and prepares them for travel, Culton says the relationship between filmmaker and museum exhibit is nonetheless a peculiar one.

"As a filmmaker, I never think about the end result," she says. "And I think part of that is, I know I'm responsible for the ingredients to make a great cake. Once the cake is baked, where it ends up going is almost a gift. I hate to say that, but people will interpret these things in their own way. 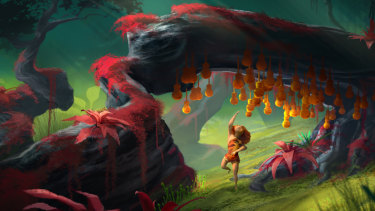 "I put all my research, my time, my effort, my passion into stories that are grounded in my own reality to a certain extent," Culton adds. "You try to make it as authentic, as emotional, as you can. But I am also mostly concerned with telling the best universal story I can, that can reach the most amount of people in the most countries. Because I feel like storytelling, if you tell it universally and you have kids that are archetypal kids that every kid can relate to, it actually brings us more together than it does divide us."

DreamWorks Animation: The Exhibition will run from September 12 to February 2 at the National Museum of Australia. Abominable is released in cinemas on September 27.