On the new TLC series, I Love a Mama’s Boy, a number of couples and the mothers in their lives are highlighted. However, one mother seems to top all the rest, and that’s Laila, Shekeb’s mother. Shekeb is dating Emily, and they’ve been together for around three years. Emily has aspirations of starting a family with Shekeb one day. But she thinks “his whole life revolves around his mother, and no one else.” 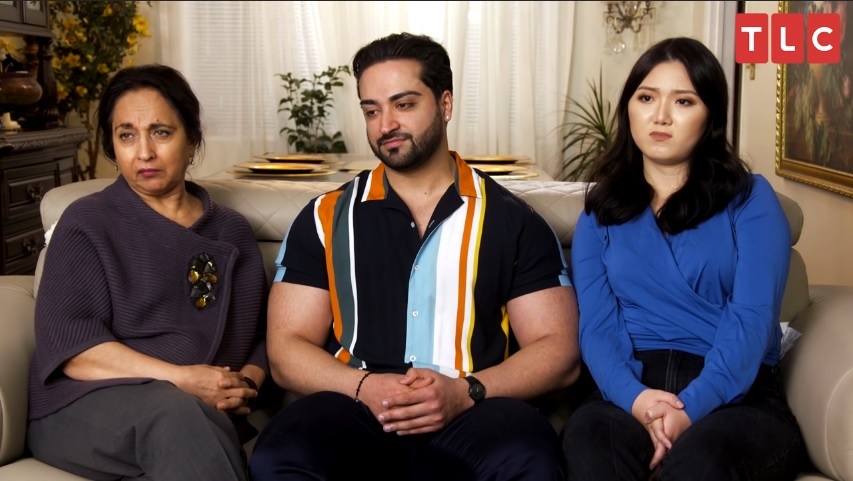 Laila has no problem feeding her son, or taking him away from Emily when they’re out to dinner for Valentine’s Day. They live together, and despite the fact that Laila is married to Shekeb’s father, the mother and son duo seem to be inseparable. Emily calls their relationship “suffocating,” and who can blame her?

Emily wants to take things to the next level and live with her boyfriend, but that doesn’t seem to be on the radar. She says, “And unless I can get Shekeb away from his mom, this relationship is not going to work out.”

Laila even shaves her son’s back every month, which is hard to believe, but the camera shows it all go down. The hardest problem is that Laila doesn’t accept Emily as Shekeb’s girlfriend. She says they have “two different” cultures.

Laila is from Afganistan, and Emily’s family is from Korea. Laila doesn’t approve of their relationship, which adds stress to the whole dynamic. Shekeb admits that his mother wants him to date someone who is Muslim, and who shares the same culture as them.

Shekeb has actually been married before to Laila’s best friend’s daughter. But “it didn’t work out.” Shekeb decided to get married because he “didn’t know how much time” his mother had, as she was diagnosed with breast cancer 12 years ago. He says he “wanted to fulfill” his mother’s “wish.”

Laila goes with the couple on their Valentine’s Day date

Shekeb decides to spend Valentine’s Day with his mother and his girlfriend, and they go rock climbing. But it’s extremely eventful, and Laila and Emily seem to compete for Shekeb’s attention the entire time. Emily convinces Shekeb to go to Valentine’s Day dinner together just the two of them. Laila obviously isn’t happy about it, and when the couple is at dinner, she calls Shekeb saying she “hurt her leg” according to her son.

He rushes from the restaurant with dinner still on the table, and goes home to his mother, who seems alright to be honest. “For someone with a hurt knee, mom looked pretty comfortable,” Shekeb admits.

Shekeb’s mother says Emily is ‘going to poison’ her

This week, it’s Laila’s birthday, and Emily even picks out a gift for her, but that doesn’t seem to matter. Emily shows up at Laila’s house for the celebration, and it doesn’t go well at all. Laila’s neighbors are over, along with her husband, Ahmad.

Shekeb brings out the cake with candles ablaze. After singing Laila happy birthday, she is told to “make a wish.” “You know what my wish is,” Laila says to her son. Shekeb knows his mother is referring to Emily, but he thinks the two of them need to “spend time together.”

Emily rings the doorbell, and Laila looks confused when she sees her, and says she wasn’t expecting her. Emily comes over to Laila, and gives her a bag containing a gift of earrings. Laila takes it and puts the bag on the table, and says “thank you.” Shekeb asks if she’s “not going to open it,” and Laila says, “Not now.”

After her guests encourage her to open the gift, she says, “I don’t need a gift.” She adds: “I don’t expect anything from her. You shouldn’t be here anyway. It’s my birthday.” Shekeb tells her that he invited Emily to come over.

Laila tells the cameras that she doesn’t “know why she came. If I knew it before, I never ever celebrate my birthday.”

“Ma, this is getting ridiculous,” Shekeb says to his mother. He tells her that Emily bought her a gift. “As a matter of fact, I’ll be honest with you, she’s the one that even helped me pick out the cake.”

In a preview of the upcoming episode, Shekeb and Emily actually get up and leave during the altercation after Shekeb tells his mother that she’s “acting like a child.”

But before they leave, Laila has one last bit to add. “Don’t show me your face again,” Laila says to Emily. “You are ruining my birthday. You are the one who’s making my life miserable. I’m sick of you.”

We’ll have to see how this all plays out between Shekeb and the women in his life.

Mumsnet reveals the top HUNDRED things mums splashed on this year
We and our partners use cookies on this site to improve our service, perform analytics, personalize advertising, measure advertising performance, and remember website preferences.Ok