‘No Time to Die’ Sets Off Another Round of Big Movie Delays – When Will Box Office Recover?

Jimmy Fallon’s Ratings Took a Dive in Trump Era – Can He Climb Back Under Biden?

Not if Colbert and Kimmel have anything to say about it

Twenty-two months into Donald Trump’s presidency, Stephen Colbert took the late-night TV ratings crown in the key adults 18-49 demographic from Jimmy Fallon’s head. (Colbert, who took over for David Letterman in 2015, had surpassed Fallon in total viewers by the second week of 2017 — just before Trump’s inauguration.)

Days into the Biden era, Colbert is still the outright No. 1 late-night show, and Fallon has even fallen behind Jimmy Kimmel in terms of overall eyeballs — though not in the main demo’s ratings.

Like pretty much everything on TV, late-night ratings are down across the board from four years ago. But Colbert’s CBS “Late Show” has taken major market share from Fallon’s “Tonight Show.” And so has ABC’s “Jimmy Kimmel Live!” 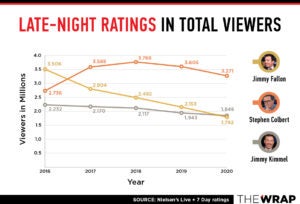 Using Nielsen’s Live + 7 Day data, we’ve charted just what the changing of the guard among the main late-night shows looks like. Though these weeknight, topical shows rarely get much delayed viewing (which generally comes via DVR, mostly), it is considered industry standard these days to include one week’s worth of those views where available.

Fallon suffered double-digit declines (on a percentage basis) in total viewers and the key demo in each year of Trump’s presidency — something that Colbert and Kimmel never experienced.

When Colbert overtook Fallon for the total-audience crown in 2017, he drew a peak average audience of 3.768 million viewers for the year, up 5% from the year before. That viewership has shrunk since then, but not as much as his competitors’. (Fallon’s average audience actually fell 17% last year compared to 2019, forcing him to slip behind Kimmel for the first time.) 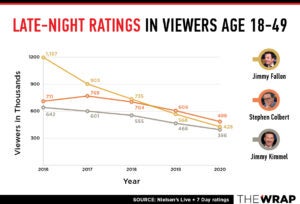 The slippage in viewership by the key demo is just as bad for Fallon over the course of the last four years, though he still held a slight edge over Kimmel among younger viewers for 2020.

In claiming territory from Fallon, Colbert and Kimmel have relied heavily on a steady stream of Trump jokes and sincere criticism of his administration. Fallon, who notoriously tussled then-presidential-candidate Trump’s hair in a light-hearted “Tonight Show” segment in 2016 that was roundly criticized, joined the pile-on party a bit late and was never as effective on the topic as the other two.

With Trump out of The White House, there is an opportunity for Fallon to climb his way back into the mix. It’s not like the “SNL” alum is unpopular — just maybe in the wrong places. Among the trio, Fallon comfortably has the most YouTube subscribers as well as followers on Instagram, Twitter, Facebook and TikTok.

Unfortunately, those aren’t Nielsen-measured platforms (and followers would still matter less than “views”). But Fallon does have some key momentum that Nielsen backs up: In the advertiser-coveted 18-49 demographic, “Tonight” topped the competition in six of the final nine weeks of 2020. That’s something to write a thank-you note about.

In terms of total viewers, however, things aren’t going Fallon’s way. On Tuesday, the overall audience average for “The Tonight Show” hit an all-time low (yes, ever, in any iteration of the decades-old franchise), when Fallon drew just 973,000 viewers according to Nielsen’s final Live + Same Day data.

Jimmy Fallon’s got his work cut out for him to become No. 1 again. But with a calm presence in the White House that hopefully brings with it a competent coronavirus-vaccine rollout strategy, we’re all ready to party like it’s 2016.