Warning: this is not a hot take, it’s a bad take. I’m wrong. Please don’t be like me. I just…can’t stop being attracted to Nate’s dad on Euphoria. Send help.

Yes, we’re talking about the same Cal Jacobs who raped an underage Jules (Hunter Schafer) in the first gd episode. I watched that scene terrified for her, disgusted with this gross man she was meeting, and totally anti-Cal…but I was also like, is that Eric Dane? It was.

Since that realization, I haven’t been able to separate the man who played McSteamy on Grey’s Anatomy from the man who raised a literal psychopath. What’s a girl to do?

Sure, this Cal version of Eric Dane is older and thiccer, but that just kind of adds to his appeal. Who doesn’t love a silver fox? When said silver fox is an abuser like Cal, most sane people. I’m starting to feel like all those women poor Penn Badgley was lecturing over their love for Joe on You.

It definitely doesn’t help that the folks behind Euphoria have really softened the guy up since episode one. Take the carnival episode, for one. Who else thought Cal was following Jules to beat some silence into her? So when he timidly begged her not to ruin his life, I felt torn: these are behaviors I would never forgive in actual life. This is the white male privilege that causes rapists like Brock Turner to serve a measly three months in prison for rape. When did I become part of the problem? 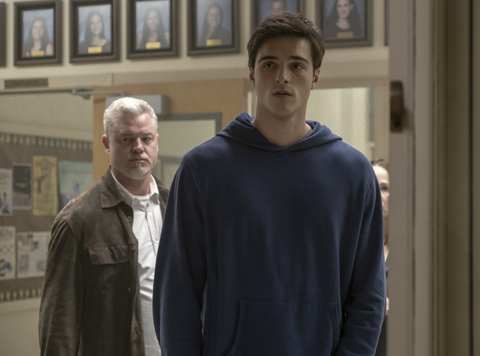 It’s not really my fault. It does feel like HBO is trying to turn Cal into a soft boy. Where’s the guy from episode one? Now, he hires sex workers just to talk! He’s worried his actions are ruining his sons’ lives! I want to say, “cue the sarcastic awwwws,” but it’s actually kind of working.

What, so because he doesn’t run around terrorizing innocent Tylers or choking women like his son, Nate (Jacob Elordi), he’s forgivable? He still records sex with unknowing partners. He’s a bad person. Period. End of story.

Now, can someone tell that to my libido?

Here’s the real tea: I’m not the only one with these thoughts. According to my colleague, who shall remain nameless, “he’s hot AF.” Now, let’s take a look at Euphoria Twitter:

Me showing up for Nate’s dad’s famous chili pic.twitter.com/Y1pRY66zQD

Omg do I actually feel…sorry for nate’s dad?!?! #euphoria pic.twitter.com/qJLyqlLTta

damn i love him.
pls protect my baby cal jacobs about everything. @euphpria @RealEricDane #EuphoriaHBO pic.twitter.com/GiYt8Y2diZ

I waited the whole week for a new scene and then Cal Jacobs was all over the episode without getting stripped?!? What was that?! #EuphoriaHBO

This is not okay!!! We all need professional help.