‘Hamilton’ producers announce just before curtain that the Wednesday show is canceled, as ‘Harry Potter and the Cursed Child’, ‘Tina – The Tina Turner Musical’ and ‘Ain’t Too Proud’ also lower the curtains out of an abundance of caution.

AceShowbiz -Broadway is also facing a setback in the wake of breakthrough coronavirus cases, with a number of productions being forced to cancel performances. “Hamilton” was the latest to be impacted as it announced just before the curtain that it canceled Wednesday night, December 15 performance due to COVID-19.

“Tonight’s performance of ‘Hamilton’ on Broadway has been canceled due to breakthrough COVID-19 cases. Our highest priority is always the health and safety of every cast, crew, and audience member inside the Richard Rodgers Theatre,” the show’s producers said in a statement released via Instagram Story. 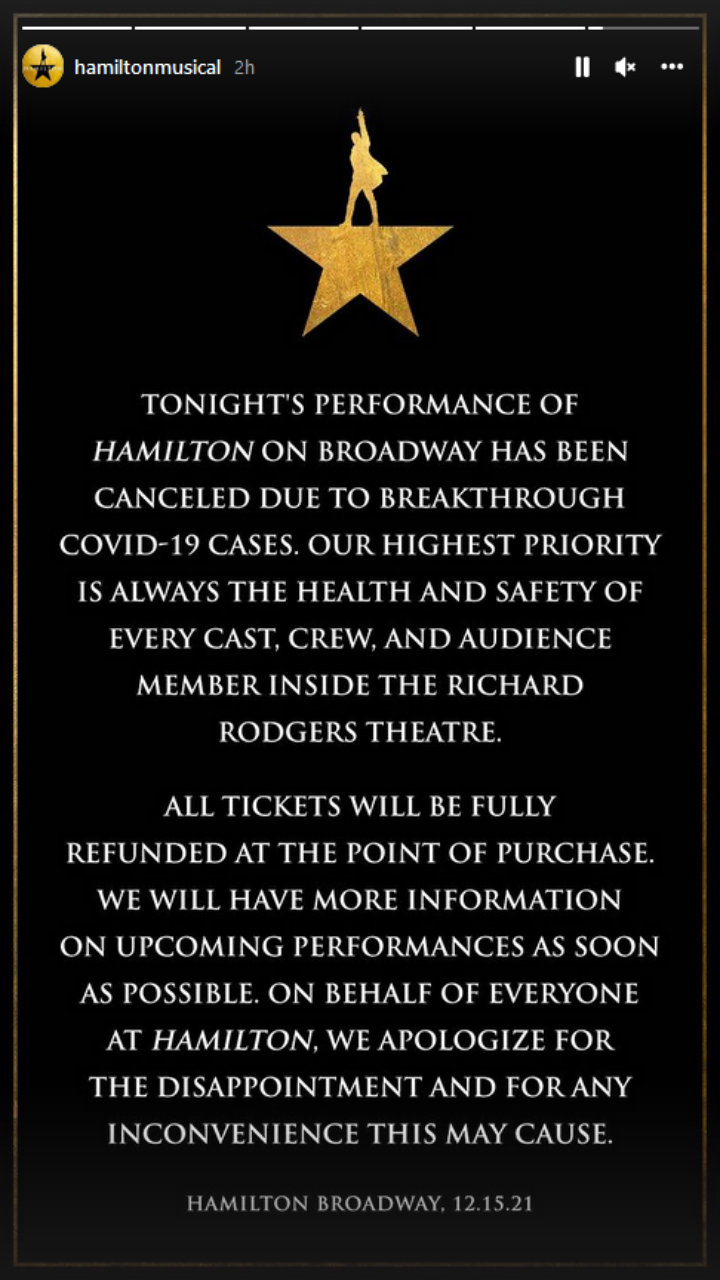 ‘Hamilton’ announced cancellation due to COVID-19.

“Performances are expected to resume tonight at 7:00 P.M.,” it continued. “At the Lyric Theatre, the health and safety of our company, theater staff and audience is out primary concern. Regular testing protocols are in place help us to maintain a safe and healthy environment for all. We will enchant you another time and apologize for the inconvenience.”

Meanwhile, “Tina – The Tina Turner Musical”, a jukebox musical about Tina Turner, canceled both of its Wednesday performances, matinee and evening, due to “the detection of a limited number of positive covid test results within the Broadway company.” Performances are scheduled to resume on Thursday, December 16.

The three shows joined “Ain’t Too Proud”, which had to cancel one show on Tuesday, “Mrs. Doubtfire”, which had already canceled four performances between Sunday and Wednesday, and Lin-Manuel Miranda‘s improv troupe “Freestyle Love Supreme”, which canceled three. In each case, at least one member of the show’s cast or crew tested positive for the coronavirus.

Broadway has taken precautions since it opened the curtain again after being dismantled for almost a year due to the pandemic. The industry has vaccine mandate for audiences and workers, frequent testing and patrons must wear masks, but the Omicron variant has caused caseloads to rise.