First published in the Sydney Morning Herald on September 22, 1956

T.V. Era Has Started To Change Australian's Way Of Life

Station TCN, the first on the air, is now transmitting from Sydney for up to two and a half hours every evening. By early next year, Sydney and Melbourne will each have one national and two commercial T.V. stations. November and December will be the months for official openings. 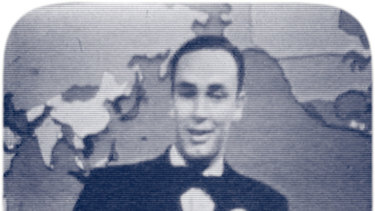 ‘Good evening, and welcome to television.” Bruce Gyngell during the first broadcast of television in Australia on 16 September 16, 1956.Credit:Channel Nine

Station TCN, operated by Television Corporation Ltd. and broadcasting on Channel 9, began its training and development stage at 7 p.m. last Sunday. This stage will continue until the official opening on November 4, the date on which Melbourne's first T.V. station (HSV, Channel 7) will begin transmission.

Station ATN, operated by Amalgamated Television Services Pty. Limited and broadcasting on Channel 7, will open in Sydney on December 2.

A fourth commercial station (GTV, on Channel 9 in Melbourne) will start regular transmission on or about January 19. 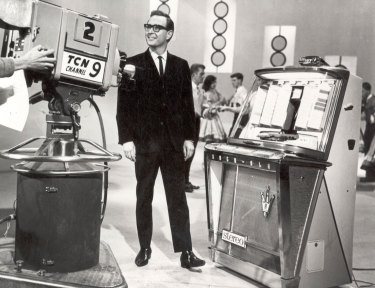 Television will bring about considerable changes in the Australian economy and national way of life. Traders estimate that between 3,500 and 4,000 T.V. sets have already been installed in New South Wales homes; and demand has risen steeply since the transmission on Sunday. One manufacturer alone (there are 28 of them in Australia) says that demand for his sets is now nine times his rate of supply.

Sets range in price from about 200 guineas to 300 guineas; a set costing 200 guineas may be purchased for a deposit of £27 and weekly payments of 31/.

In addition to this payment, the televiewer must be prepared to pay about 10/ per week for maintenance and repairs. This estimate includes the £5 annual viewing licence which must be paid for after January 2.

The ATN television centre at Epping is now under construction, and the station's first programmes will be broadcast from there in December. Programmes in this studio, which will be the largest commercial T.V. studio in Australia, will be transmitted by microwave link through the air to Gore Hill, and then transmitted in a matter of microseconds from the aerial. 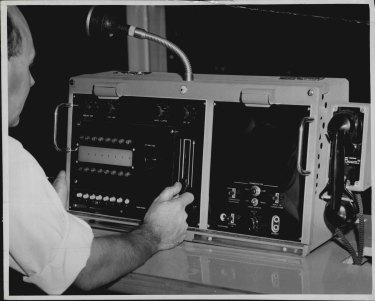 Television has changed Sydney in other ways. Neon signs advertising the new medium have sprung from the skyline, and T.V. antennas are becoming a part of suburbia.

Some of the questions prompted by these outward signs have already been answered by TCN's transmissions this week.

The man in the street was rather impressed by the quality of the picture produced by the standards of the Broadcasting Control Board (625 lines to the screen). He had expected the picture to be fuzzy and lacking in tonal gradation; instead, he was pleasantly surprised.

The range was surprising, too. Programmes were received as far afield as Newcastle and Wollongong.

The first night programme included previews of some of the American features to be shown by TCN. But these will not be shown until HSV, which is affiliated with TCN, opens in Melbourne on November 4.

More than any other Sydney station, ATN will stress "live" Australian programmes.

Fifty per cent of its programmes will be "live" material originating in the ATN studios. This figure compares with 33 per cent on the national stations, and 25 per cent of Australian material on TCN.

Because of its affiliation with such leading radio stations as 2GB, 2UE and 2UW, Station ATN is in a particularly strong position to provide live programmes and to draw on the services of Australia's leading radio artists. These artists include such well-known personalities as Jack Davey, Bob Dyer, Harry Dearth, George Foster, John Dease and Terry Dear.

Station ATN will begin each afternoon with programmes of special interest to women. The children's programme, from 5 p.m. to 6.30 p.m., will be partly "live" and partly film.

In planning its children's programme, ATN has set itself the ambitious task of emphasising education almost equally with entertainment. It has purchased the Encylopaedia Britannica series (which includes films on "Marco Polo's Travels, "Sleeping Beauty," "Children of Great Britain," "India and Pakistan," "How a Helicopter Works," "Brass, Percussion and Woodwind Choirs" and "The Hare and Tortoise Fable"), and "Noddy," a series of stories by Enid Blyton.

Readings from famous children's classics, a hobbies section and educational films will also be programmed. Mr. R. J. Kinghorn, of the Sydney Museum, will prepare a weekly programme for the children's session. He will speak on native and overseas fauna, and will have the co-operation of English and American zoos and museums and Sydney's Taronga Park Zoo.

The evening programme will include two nightly variety sessions: "At Seven on Seven" and "To-night In Sydney." There will be a nightly news service, and a separate news commentary by Eric Baume. The news service will draw upon the full news resources of "The Sydney Morning Herald" and "The Sun" organisations.

Station ATN will give special attention to programmes of an educational nature, and proposes to introduce features dealing with cultural, scientific and literary topics in a popular way.

Almost all the films to be shown on ATN have been specially made for television in Britain or the United States. Half-hour features to be shown include: "Victory At Sea," a 26-part series which won America's T.V. equivalent of the Academy Award; "Alfred Hitchcock Presents," a series of dramas produced and personally introduced by Hitchcock; "Dragnet," starring Jack Webb; "Halls of Ivy," a college story starring Ronald Colman; "Susie," a comedy series starring Ann Southern; "The Burns and Allen Show"; "The Buccaneers"; "Sir Lancelot," and "The Douglas Fairbanks Theatre."

Station ATN's weekly programme will also include two Feature length fi|ms, sporting events and a religious session which will consist of religious talks and discussions as well as church services.

Sydney's national station will transmit for only 22 hours a week until mid-December, when one of the A.B.C.'s two outdoor broadcasting units will return from Melbourne, where it will have been used for the Olympic Games coverage. Weekly transmission time will then rise to 26 hours, and will reach 30 hours when ABN enters its permanent studio next April.

The ABN format will consist of three distinct sessions: 3.30 p.m. to 4 p.m., programme of interest to women, including a series of features by the American pianist Liberace; 5.30 p.m. to 6 p.m., the children's session (some live material, such as "Tom The Naturalist," and later the Argonauts; some film, such as the "Lassie" series); 7 p.m. to 9.30 p.m., the main evening session.

The evening session will begin with the nows, a newsreel and weather information. These will be followed by "live" drama, interviews and films. ABN will televise A.B.C. concerts and recitals at the Town Hall, but there is no immediate prospect of Parliamentary television. The question of sports coverage by television is still very much unanswered. ABN hopes to televise the first day of the N.S.W. lawn tennis championships in November, and all stations plan to present films of the Davis Cup. Rugby Union will be televised, but the position in racing and cricket has yet to be clarified.

There is much to be clarified, too, about the Olympic Games. The national station in Melbourne will have equipment to cover as much of the Games as it can. It will be able to televise outside events like the marathon, and will interview competitors. ABV also hopes to gain permission to televise some stadium events, and to "tele-record" as much material as possible for rebroadcast over ABN in Sydney.

A dispute at present exists between commercial newsreel and T.V. agencies, and the Australian Olympic Committee. The commercial agencies object to restrictions imposed by the committee on their access to the Games, and at the moment have announced that they will not cover the Olympic Games.

The new medium has not unexpectedly suffered birth pains. A dispute at present exists between Actors' Equity, on the one hand, and the commercial T.V. stations and film companies on the other, over conditions of employment and rates of pay. This dispute will be the subject of a conference next Tuesday when, it is expected, the ban on work for T.V. advertising films will he lifted by Actors' Equity. The case will then be heard by Arbitration Commissioner Mr. G. A. Findlay.

Like any other commercial organisations, Australia's new commercial T.V. stations are vitally concerned with revenue — in their case, advertising revenue.

Response from national advertisers, according to statements by ATN and TCN, has so far been most satisfactory. But many advertisers are waiting until they can take advantage of two-city
co-ordination in advertising on ATN and its associated Melbourne station GTV, and on TCN and HSV.

Advertisers may purchase station time for the sake of sponsoring a programme, or simply for the broadcast of an announcement. Thirty minutes of station time between 7 p.m. and 10 p.m. may cost £120; 15 minutes may cost £80. To these figures, which are for time alone, must be added the cost of the programme which is broadcast during that time.