Ever since Jennifer Aniston landed on the map in the mid-1990s, thanks to her “Friends” role as Rachel Green (along with that iconic hairstyle), she’s always been known as one of the best-dressed celebrities thanks to her cool, laid-back California style.

In the ’90s, she was also a style icon thanks to her “Friends” character’s wardrobe full of fitted T-shirts and crop tops, which Aniston says she didn’t mind wearing at all. “No one was saying, ‘Girls, your outfits need to be tighter and smaller and skimpier.’ Absolutely no way. It was just sort of what we felt comfortable in,” she recalled to Howard Stern on his Sirius XM show (via People).

And while plenty of women who tuned in to “Friends” on a Thursday night wanted to raid Rachel’s closet (with the exception of those season-confusing sleeveless mock turtleneck tops), Aniston also managed to make it into countless “Best Dressed” lists week after week for her chic and classic style. But Aniston wore one red-carpet look that turned heads at the time and still has people talking to this day. (And, yes, her ex-husband Brad Pitt was by her side for this one.) Keep reading to see what dress we’re talking about!

Jennifer Aniston stunned in Versace in 2004 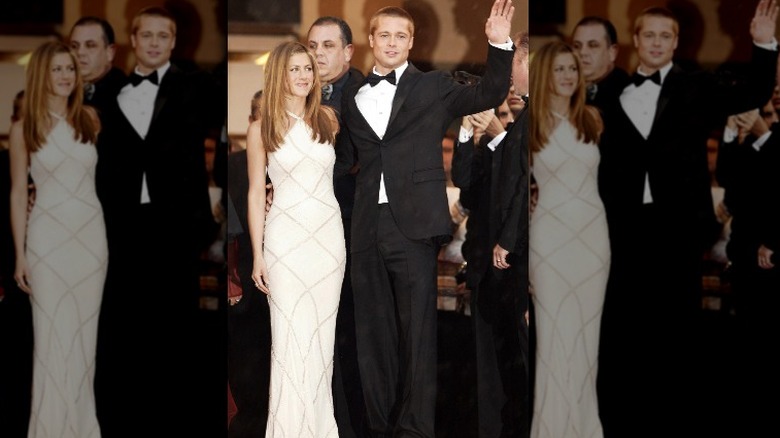 In 2004, Aniston dazzled in an embellished Atelier Versace gown halter dress when she accompanied her then-husband Brad Pitt to the Cannes Film Festival for the premiere of his movie “Troy,” per Harper’s Bazaar. Her only accessory was her sun-kissed hair, which flowed to her shoulders. The body-hugging dress was a red-carpet hit. (And, yes, Pitt couldn’t keep his hands off her the entire time, too.) Pitt was the star of the film, but Aniston was certainly the star of the red carpet that night.

The Hollywood actress hasn’t worn a dress like this in several long years — she likes to stick with her true-and-tested little black dresses for the red carpet — but she’s always loved showing off her curves. She told InStyle in 2018, “It’s time to just stop thinking beauty is in the shape of a size 4 and the right butt size and the right waist size and the right measurements. It’s just old. We’ve done it. We’ve been there.”

Aniston’s Versace gown was an iconic look for one-half of a very iconic former couple. Aniston and Pitt are reportedly still friends now, but the legacy of their relationship lives on.