There’s an iconic image of a director on set: active hands pointing where something goes, framing a shot, demonstrating a desired motion. You don’t have to look hard to find plenty of behind-the-scenes photos and footage of Justin Lin doing just that over the course of directing five of the “Fast and Furious” films — each a showcase for his distinct, often virtuoso ability to create both ballet and logic out the madness of cars racing, crashing, exploding, and flying at top speeds.

But the reality is no director, including Lin, can be on the ground conducting each element. In fact, while Lin was on a soundstage in the U.K. with Vin Diesel and the “F9” cast, stunt coordinator Spiro Razatos’ second unit squad was in Thailand shooting huge action sequences that traverse through a jungle minefield and then down the side of mountain and, eventually, off a cliff.

When Lin was on the Filmmaker Toolkit Podcast, we asked how he keeps his hand in directing the action from — literally — the other side of the globe. “Basically, I don’t sleep,” joked Lin, before adding, “You blink, and hundreds of thousands of dollars get spent by the end of that day, so you better fucking figure it out, and you better figure it out how to communicate [what you want].”

After directing four “F&F” films and taking six years off from the franchise, Lin has unique perspective on the key to those conversations within the franchise’s army of thousands of technicians, coordinators, artisans, and performers. “So it’s something where I don’t think I’m an obsessive person, but I love it,” said Lin. “I love it when I can have the right conversation.”

To explain what he means by this, Lin recalled being on the soundstage directing Diesel inside a special effects car rig being shot against a green screen, and then trying to translate that to the pro who will actually be driving the car thousands of miles away. 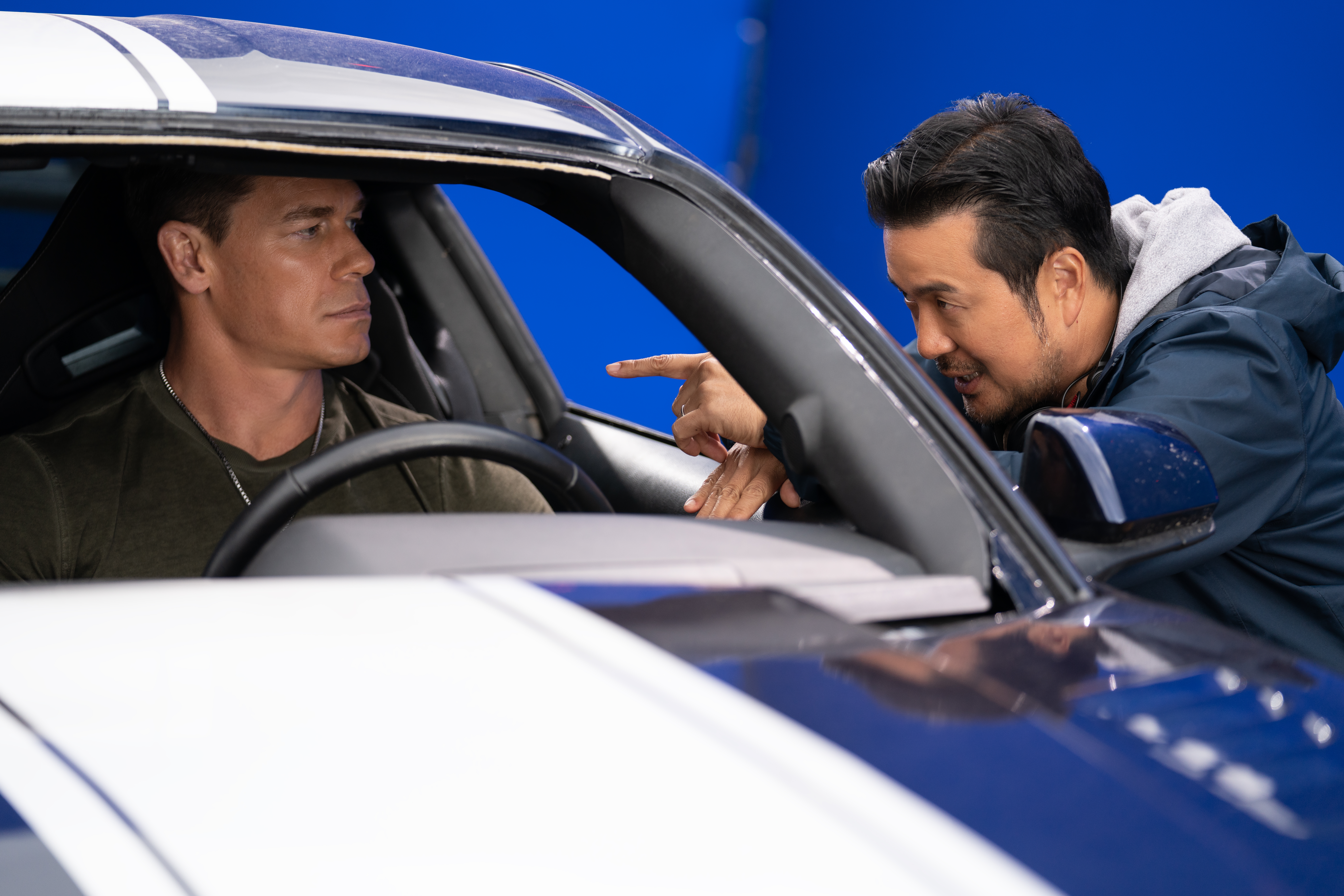 John Cena and Justin Lin on the set of “F9”

“I’m talking to the [stunt] driver, and saying, ‘Hey, you’re [Dom] Toretto [Diesel’s character], you’re going through this,’” explained Lin. “I’m trying to communicate with them, because [the stunt drivers] are so good, that they get everything perfect, and I’m trying to make it imperfect, and make it so it matches our character work inside the car.”

The big setpiece through the minefield and down the rough mountain terrain was perfect for this. It was monsoon season and many of the cars weren’t made for off-roading, allowing Lin to establish early in the film a visual theme of a less controlled, often vertical action that he could continue throughout the movie.

“The imperfections were inherit in what we were trying to shoot,” said Lin. “And that sequence for me was starting [something], we were trying to introduce new visual language, we were going to keep building throughout the movie.”

The action of “F9” also reaches a new level of ridiculousness, even by “Fast and Furious” standards, with super-charged magnets, rockets, and space flight. To which Lin commented, “For whatever sense of ridiculousness people put that meter on, I feel like I still have to ground it in something.”

When he talked about grounding the fantastical action, Lin emphasized the importance of practical stunt and special effects work being the starting point. That’s not to say visual effects aren’t a huge part of the equation, but more that there’s a unique challenge in getting the absurdity of flying cars right. It starts with a real moving car.

“We see cars every day, so if you CG a little bit, and it’s just a fraction a percent off, your brain just knows that something’s wrong,” explained Lin. “You know, it’s so much easier doing ‘Star Trek,’ because we don’t see spaceships every day, right, so we believe it.”

In “F9,” a good portion of the most extreme action surrounds super-powered magnets. Magnets that, when activated, can flip enormous army trucks, or yank a car right through a building.

“I didn’t want to sit there in a dark room talking about what I think a magnet can do, versus [what] Peter Chang, who is VFX supervisor, [thinks they can do], versus a 100 [VFX] artists I have in another continent,” said Lin. “I want to make sure that whatever we did, as crazy as it might sound, like let’s just launch the car through the building, so whatever conversation we’re having, we’re not talking in theory, we’re reacting to something.”

In the video above you can watch Lin break down the scene in which he filmed that red car being pulled through a store front. To hear the full conversation, subscribe to the podcast below.

The Filmmaker Toolkit podcast is available on Apple Podcasts, Spotify, Overcast, and Stitcher. The music used in this podcast is from the “Marina Abramovic: The Artist Is Present” score, courtesy of composer Nathan Halpern.