The Television Academy has embraced the hostless show that worked for the Oscars in February, but typically Emmy hosts have also been used to promote the broadcasting network as well 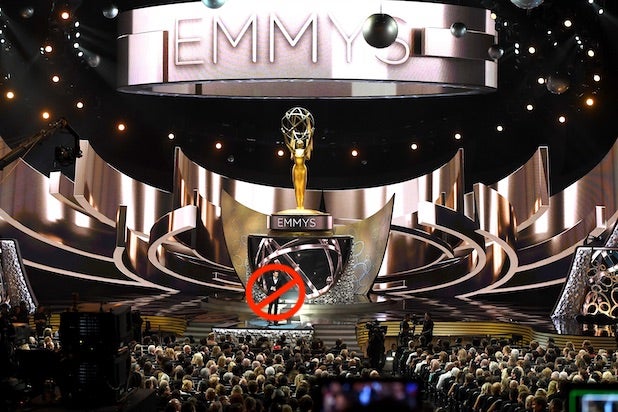 If it worked for the Oscars, it’ll work for the Emmys.

That, at least, seems to be the reasoning behind the decision not to have a host for Sunday’s 71st Primetime Emmy Awards. Seven months after a hostless Academy Awards show garnered positive reviews and saw an uptick in ratings, the Emmys will go the same route and hope for a similar result.

Speaking to the Television Critics Association in August, Fox Entertainment CEO Charlie Collier admitted that the network, the show producers and the Television Academy considered the Oscars show in making their decision – but, he said, the real reason was to have more time to celebrate the shows that are competing for Emmys for the last time this year, including “Game of Thrones,” “Veep,” “The Big Bang Theory” and “Empire.”

“What’s interesting about this year to me is how many amazing shows we’re saying goodbye to,” he said. ” … You really have to look at all the tradeoffs. If you have a host and an opening number, that’s 15-20 minutes … The conclusion was reached that this year we’re highlighting so many shows that are going away that it would be a really strategic use of the Emmys” (to do without a host).

There’s no telling if it will work until we see Sunday’s telecast, but it’s worth noting that the Oscars and Emmys have used their hosts in very different ways, and for different purposes – which means that jumping on the no-host bandwagon could have repercussions for the Emmys and for Fox.

For the Oscars, the host was typically a movie star or stand-up comic designed to give the show a shot of adrenaline right off the bat, to keep things moving through all 24 awards and, with luck, to bring a few extra viewers to the party.

It didn’t always work, though Ellen DeGeneres likely brought in some viewers in 2014 when the show scored its highest ratings of recent years. But people tune in to the Oscars more for the movies that are nominated than for the host – so when original host Kevin Hart withdrew last December after drawing criticism for past homophobic remarks, the Oscars opted to go without an emcee in a safe year in which the Best Picture nominees included such big hits as “Black Panther,” “Bohemian Rhapsody” and “A Star Is Born.”

For the Emmys, the nominees don’t change completely year to year, and the show alternates between ABC, CBS, NBC and Fox. For years, standard operating procedure has been not just to find a host who can move the show along, but one who can also promote the network that’s airing the show.

That’s been the practice since 2006 when Conan O’Brien hosted an Emmys show that aired on NBC, the network for which he was then doing “The Late Show.” Since then, NBC has used Jimmy Fallon, Seth Meyers and, last year, “Saturday Night Live” cast members Michael Che and Colin Jost; ABC has used Jimmy Kimmel twice; CBS had given the gig to Stephen Colbert and twice to Neil Patrick Harris, who also starred in its “How I Met Your Mother”; and Fox has used Jane Lynch from “Glee,” Ryan Seacrest from “American Idol” and Andy Samberg from “Brooklyn Nine-Nine.”

Only once in that stretch did a network not showcase its own talent, and it didn’t go well: In 2008, to recognize the exploding popularity of reality television, the five nominees in the Outstanding Reality Show Host category hosted together, and flopped badly. The show also drew the fewest viewers on record, though that mark has been broken in each of the last four years.

So Fox is giving up an opportunity to showcase one of its own stars on the Emmy show (and it won’t have any winners on the stage, either, because the network doesn’t have any nominees in the 27 categories that will be presented).

“We’re so proud to host the Emmys, but no one will say ‘That is Fox’s Emmy’s,’” Collier said. “Our job is to assess how to elevate the program in the year we’re lucky enough to broadcast it.”

The main reason people think of the no-host Oscars as a success, of course, is that it reversed a slide in ratings and increased viewership by about 3 million over the previous year’s record low of 26.5 million. But it wasn’t the lack of a host that caused the gain, it was the movies competing for the top awards.

Last year’s Emmys also hit an all-time low of only 10.17 million, which followed three years in which total viewers had fallen below 12 million for the first time ever. But again, hosts don’t seem to have a substantial effect on the numbers: In the decade that began in 2000, for instance, Garry Shandling hosted both the most-watched Emmy show (21.8 million in 2000) and one of the least-watched (13.8 million in 2004). The most recent Emmys without a host also took place in that decade, in 2003, and its 17.7 million viewers were the fourth-most in that stretch.

So the proof that the Emmys are right to jump on the no-host bandwagon will come with … what, exactly? A ratings bump will help, regardless of the cause. But mostly, Fox and the Television Academy are probably looking for the kind of respect the Oscars got back in February.

The New York Times review of that show was headlined, “Nobody Hosted the Oscars. And They Did a Fine Job of It.” And it concluded, in words that would no doubt please the Emmys as well, “Maybe the secret to an awards show isn’t joke writing or pizza-and-selfies stunts but faith: trusting in the moments that come from serendipity and emotion — which is to say, usually, from awards. The only way to get those moments is to get out of the way and hope.”

As for whether this no-host idea could become a trend, it’s too early to tell. This year’s Grammys and Tonys both used hosts, Alicia Keys for the Grammys and James Corden for the Tonys. Next year’s Oscars has yet to announce who’ll be producing, much less whether it’ll use a host, although ABC chief Karey Burke said, “I think you will see us not messing with that formula” after the success of this year’s show. And the Golden Globes, which only used a host once in its first 67 years but has done so every year since Ricky Gervais broke its no-host streak in 2010, hasn’t made an announcement but isn’t likely to go hostless.