THOSE who grew up in the noughties will probably be familiar with the carnage of Dick & Dom In Da Bungalow.

The BBC children's entertainment show was hosted by Richard McCourt and Dominic Wood, and was on every weekend. The iconic duo were some of the biggest names in kids TV, and their competition show became a hit.

Every Saturday, the live show saw six children invited to the 'Bungalow', where they completed bizarre challenges.

Known as 'Bungalow heads' on the show, they all competed to win the incredible prize bundles, which ranged from TVs with built-in video players (a luxury!), bikes, and all sorts of toys.

Metro.co.uk spoke to Dick and Dom themselves, who revealed what it was like on the show.

The TV legends revealed they didn't meet any of the contestants until the exact moment everyone saw on telly.

They explained the kids were incredibly excited, and that bosses ensured they were full of energy.

Dick said: "We’d only meet them as soon as we were going on air really because they were ushered in by the chaperones, fed ten tonnes of Haribo Tangfastics and lots of fizzy pop.

"By the time we met them on air, they were absolutely wired."

X Factor star heartbroken after death of fiancée, 34, on their wedding day

From the dancing with underpants on their heads and messy food fights, to being gunged whilst sitting on a toilet, the children definitely tired themselves out by the end of the weekend.

Speaking of the complaints they received, Dom recalled their executive producer having to respond to letters featured on BBC's Points Of View.

The debate show often discussed the kids programme, as Dom said: "People would write complaining letters, and there’s a famous clip of Terry Wogan reading out a letter complaining about how it wasn’t suitable."

Dick added that he remembered being "mentioned in the House of Commons" too, but added that this was only due to things the children had come up with themselves.

He said: "We were mentioned for various things that people thought were a bit over the line, which they weren’t.

"They were all behind the line, before the line, even. We always stopped at the line.

"A lot of this stuff was actually thought up by the kids, so blame the children!" 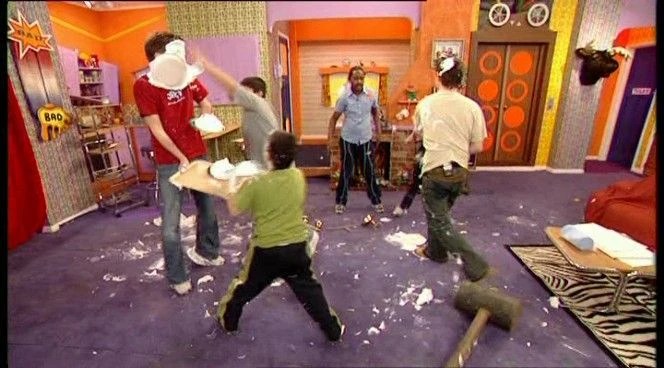