Counting On stars Joy-Anna Duggar and Austin Forsyth are young parents of two small children – Gideon, 2, and Annabell Elise, 5 months. Like any proud wife and mom, Joy-Anna regularly posts on social media about her family.

She and Austin also discuss their daily lives on their Follow the Forsyths YouTube channel. But putting your life online – especially when you’re a Duggar – can come with some nasty backlash. 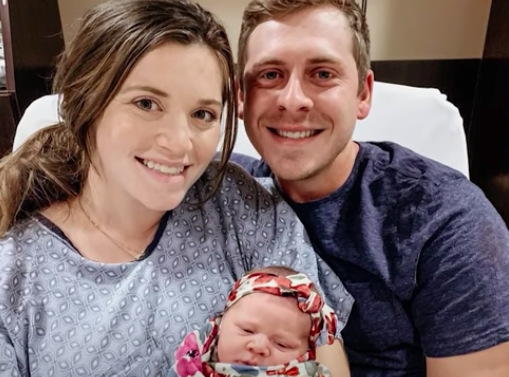 Back in November, Joy-Anna shared a pic of her daughter who they call Evy. And at the time she was barely three months old. In the photo, Evy is lying in the living room on a couch as Gideon runs around playing.

Both kids appeared happy and healthy, and there was obviously an adult right there in the room taking a picture. But some Counting On fans were afraid that Evy was unsafe on the couch by herself. And they called out Joy for being “dumb as rocks.”

“What a bunch of idiots. The damn floor would at least be safer than a recliner” one troll wrote. A second added, “Joy is dumb as rocks, but I’m beginning to think her parenting is subpar at best.”

According to The Sun, the scrutiny over Joy’s parenting decisions came just days after the beauty company DIME dropped their partnership with Joy because they “do not support” Duggar family values.

In a company statement, DIME said that they didn’t end the partnership because of the Counting On star’s beliefs. However, they had received complaints about the Duggar family being accused of racism, and they didn’t “want to associate” their brand with that in any form.

Austin Forsyth gets slammed for being an ‘irresponsible’ dad

In early January, Austin shared a post about his latest venture – obtaining his skydiving certification. The 23-year-old shared a photo of himself and Gideon lying on the floor. Both were in a skydiving stance with arms and legs raised in the air.

“He learns quick. Gideon will be skydiving in no time! freefalling #skydiving #myminiman,” Austin wrote in the caption.

Joy explained that “Austin got his skydiving certification a couple months ago.” She added that Gideon is always asking his dad, “you bounce (jump) Airplane?”😅.”

Once again, Counting On fans weren’t happy with a parenting choice. This time they went after Austin on Reddit. One user wrote, “This is the kind of crap you’re supposed to do BEFORE you have children, in case you die.”

Another user added, “He has 2 children and an unskilled, minimally educated wife who all depend on him so this seems irresponsible.”

Tons of comments continued to pour into the thread, with numerous Counting On fans voicing their outrage over Austin’s skydiving choices. One voiced the opinion that parents of small children have no business jumping out of a plane unless they are in the military.

“Because of this immaturity he decided he would jump out of planes for excitement,” the skeptic wrote. “Also he probably believes everyone will think he is brave and manly rather than irresponsible and childish.”

Another asked how someone with two extremely young children – who is also the sole supporter of his family – has the time to get his skydiving certification and to go hunting in Colorado.

Despite the criticism she continues to face online, Joy is still brave enough to talk directly with her fans. The Counting On star recently treated fans to a rare Q&A session on her Instagram Story. And, she revealed details about how she knew Austin was “the one.”

According to In Touch Weekly, Joy told one Counting On fan that she had a crush on Austin when she was just 13-years-old and he was 17. She says that she knew he was her future husband because of prayer.

“I’ll try to give a simple answer. If I could say one thing, it would be: I prayed for specific things that were important to me for Austin and God answered those prayers. And we just had them sparks! LOL,” Joy said.

Joy and Austin announced their courtship in November 2016 and tied the knot in May 2017 when Joy was just 18-years-old. They welcomed baby Gideon just nine months later.

As for how their relationship has changed since becoming parents, Joy says it’s important to keep the fire alive. Since having kids, they’ve had to “be more purposeful in spending time together.”

Counting On is currently on hiatus. New episodes will return to TLC later this year.