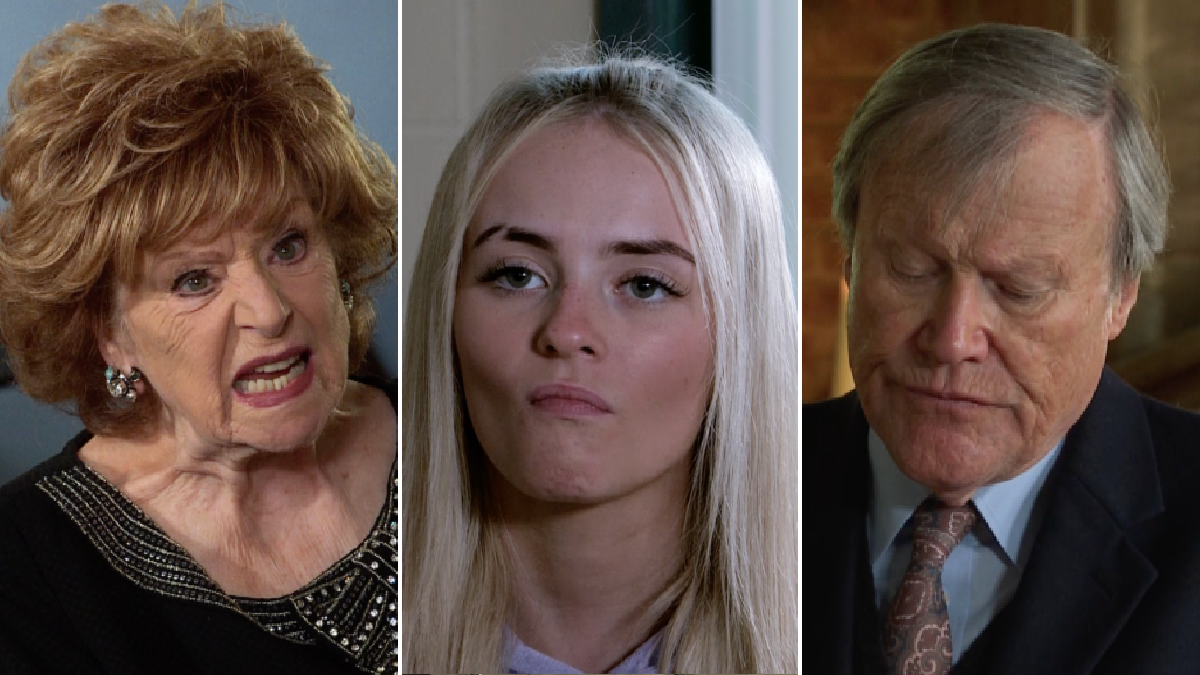 It was a week that changed everything forever, as Norris Cole died in upsetting scenes, and next week, Coronation Street honours the memory of the icon, as the cobbles stalwarts gather for his funeral.

The legends toasted to him in the Rovers, while Mary and Freda feuded over the best way to honour his memory.

Tyrone Dobbs (Alan Halsall), meanwhile, was gutted when Fiz Stape (Jennie McAlpine) revealed she did not want to get back with him, in the wake of Alina Pop’s (Ruxandra Porojnicu) departure.

Yes it was quite a week for the Weatherfield residents, and next week is equally as unmissable.

If you’re struggling to wait until Monday for your next slice of cobbles action, then fear not, as we’ve got six preview clips from next week’s episodes to tide you over until then!

Ryan Connor is left speechless when he sets his sights on Zeedan Nazir, who is less than impressed with him over what happened between he and Alya (Sair Khan).

Ryan attempts to explain himself, but Zeedan doesn’t want to hear it, instead berating him for allowing Geoff Metcalfe (Ian Bartholomew) to terrorise both Alya and Yasmeen (Shelley King).

Alya, however, enters the cafe and overhears the showdown, and she wastes little time in stepping in to defend Ryan, reminding Zeedan that he was nowhere to be seen during the Geoff ordeal!

Mia, reeling in the wake of the fact that Kelly is Rick Neelan’s daughter, explains her tragic past with loan shark Rick, and how her mum ended up dealing in order to pay Rick back.

Her mum then overdosed and died.

Kelly is appalled, but explains that she knew nothing about it, telling her that her dad is in Spain. Mia, however, reckons Rick is dead – something which leaves Kelly speechless.

Grace Vickers demands that Ed Bailey carry out all the tasks she’s wrote down on a snag list, reminding him that if he refuses, she will take Glory away from him and Aggie.

Aggie seethes over her behaviour.

Gemma Winter pleads with Freda to give Aled back to her, otherwise he’ll miss his appointment at the hospital. An interpreter arrives, and explains to Freda that Gemma simply wants her son back.

But Freda refuses to hand him over, leaving Gemma stunned!

Roy Cropper reads a final message written by Norris. Norris reflects on his life, and makes reference to his relationship with best friend Rita, although he implies that they never ‘took the final leap’ in said relationship, which leaves Rita horrified.

As the message concludes, Norris revealed a final secret: Rita used to get her hair coloured at Claudia Colby’s salon, which leaves Audrey Roberts fuming!

David Platt and Daniel Osborne argue over Max Turner. The confrontation arises in the wake of Daniel’s wallet going missing, as he blames Max for the theft.

But David refuses to believe his son is a thief, hence the conflict. Daisy Midgeley, meanwhile, watches on.