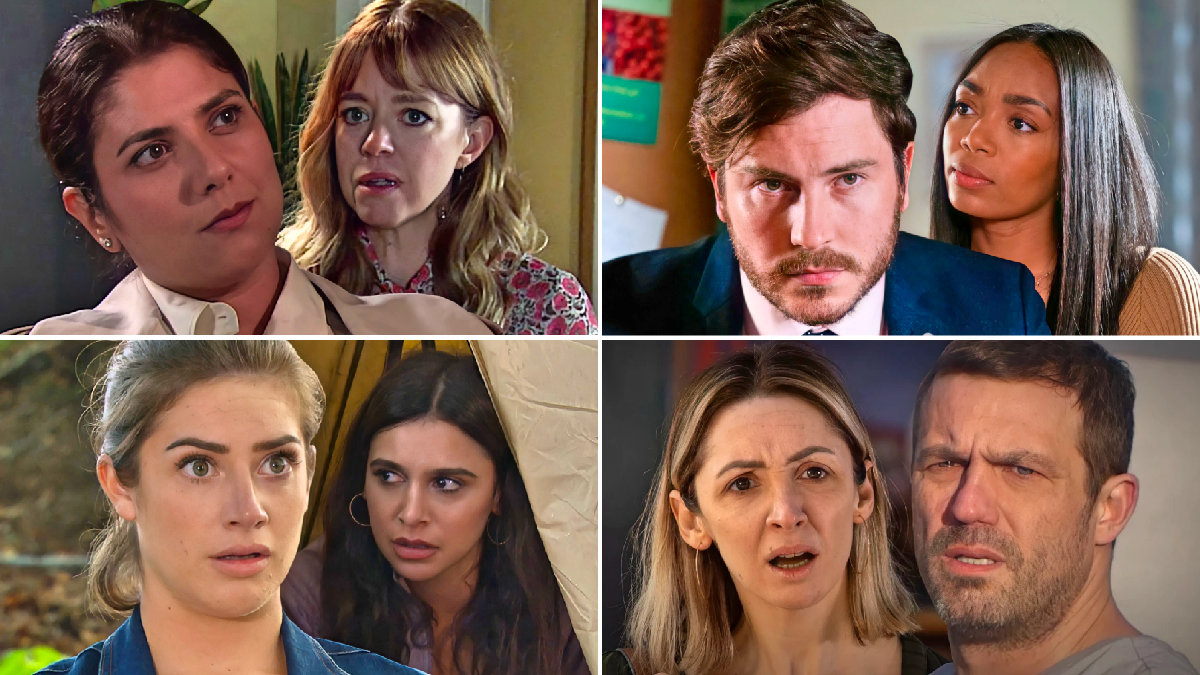 There are vile threats and revenge missions aplenty in several of the soaps next week, as some residents prepare to take shocking action.

Sabeen Habeeb’s career is sabotaged in Coronation Street, seemingly by Toyah Battersby, and thus she visits evil Harvey Gaskell in prison, telling him all about how Leanne’s sister is to blame for his appeal following through!

It’s not just Harvey on the warpath, as Emmerdale killer Meena Jutla vows to commit murder when she overhears David Metcalfe confessing his love for Victoria Barton.

EastEnders’ Chelsea Fox pulls out a pregnancy test, which Whitney Dean spots, but is she pregnant with Gray Atkins’ baby?

Hollyoaks, meanwhile, sees Donna-Marie Quinn confirm that she saw the hit-and-run that killed Brody Hudson! Is Warren going down at last?

It’s shaping up to be quite a week, right? If you’d like a little more information about what’s coming up, we’ve highlighted 25 must-see soap moments from next week’s episodes to tide you over until Monday.

1. Abi returns and apologises for putting Kevin and Jack through hell. However, she makes it clear that she might not be staying put. Jack is distraught, and Abi claims she doesn’t want to reschedule the wedding due to the organising involved, but Kevin promises her that he and Debbie will do it all. She reluctantly agrees, much to Kevin’s delight, but Nina is suspicious of her. Later in the week, Nina pays Abi a visit – but what will she have to say?

2. Imran likens Rita’s fostering experience to his own, quizzing her about Sharon. Rita opens up, revealing that Sharon still calls her and sends the odd text, leaving Imran’s interest piqued. Rita becomes distracted, and Imran pockets her phone, but to his horror it starts ringing!

3. Toyah informs Imran that they’ve been asked to foster a four-year-old, and he struggles to juggle this news with Sabeen’s demands for more information about Harvey. When Rita sees through his latest bid to ingratiate himself, Imran has enough, telling Sabeen that the blackmail has to stop. Afterwards, he opens up to Toyah – telling her all about Sabeen’s blackmail plan, and his one night stand with a stranger. But has he told her the whole truth?

4. Sabeen is left reeling, as she tells Imran she has been accused of misconduct and had all of her cases taken off her! She accuses him of forwarding her private texts to her boss, but Imran guesses Toyah must be to blame. Sabeen subsequently visits Harvey, telling him Toyah has jeopardised his appeal, leaving Harvey vowing revenge on both Toyah and Leanne!

5. Dev is intrigued when he bumps into Natasha, who is planning on buying the salon so that Sam can be closer to Nick and his family. Bernie notices Dev’s interest in Natasha, and decides to wind him up, allowing him to think Natasha fancies him. Natasha later turns Dev down when he asks her out, leaving Bernie in stitches.

6. Nina is confused when Roy finds a notebook detailing Corey’s training regime. She sets out to find the owner, but who does it belong to?

7. Leo invites Jenny out for a drink, while Johnny chats to an old business contact with Carla at the bistro. The meeting is going well, until Jenny walks in with Leo, leaving Johny stunned. What will transpire?

8. Kim is stunned when she overhears Mitch taking a cab booking for a Vince Hubbard. Phil overhears, adamant she leave the matter alone but Kim tracks the booking to the Walford East. Matters get more confusing when she finds a children’s entertainer in a costume claiming to be Vince. When she confronts him she spots his wallet, sure it’s her husbands but he hightails it out of there. Phil makes it clear Kim needs to stop digging for information or there could be serious consequences. Denise pleads with Kim to leave the matter alone.

9. Scarlett wants to do a school project on Helen Keller leaving Janine upset that she’s not her daughter’s hero. Determined to get in her good books, she spins a tale, but Scarlett remains uninterested. However, Scarlett’s school project is ruined by Bert and Ernie, and thus she asks Janine if her friends, who are deaf, will give a talk at school instead. Janine is determined to prove herself, so she asks for Frankie’s help again and later gives a presentation to Scarlett’s class.

11. A drunken Ash throws up all over Harvey’s cab on her way home, leaving him less than impressed. She soon realises she’s left her work pass somewhere, but her mind is elsewhere, as she’s getting through her assessment when a patient refuses to be treated by her because she’s not white. To make matters worse, she’s being reported for failing to inform the hospital that her badge was missing. Harvey later berates her for ruining his cab and makes a comment that stops her in her tracks.

12. Bobby is obsessively cleaning the kitchen, as a concerned Dana watches on. After having a chat about everything they decide to get back together

13. Kat gets Tommy to talk, and soon she realises why he’s been acting up since the fire. She sets out to find Janine!

14. Gray tries to withdraw cash from Tina’s bank card but the account has insufficient funds. Later he meets with an old colleague to try and get work, but the colleague makes it clear his old boss Laura has blacklisted him!

15. Will’s worst fears are realised when Kim agrees to let Priya and Ellis move their base camp for the survival event to the site of Malone’s body. Sensing that he’s hiding something, Kim demands that Will come clean, and eventually he does just that, explaining that the site in question is where he buried ‘the body’! Kim is stunned, and later she comes to a decision. Will, meanwhile, flees the village.

16. Victoria is heartbroken when Meena tells her David wants her to stay away, but she soon decides to get to the bottom of what’s going on for herself, slipping into his home. But Meena catches her, and starts unbuttoning her blouse for David. Victoria reveals herself, and David tells her to sort herself out. However, he later confesses his love to Victoria, but little do they know Meena has heard every word – and she wastes little time in plotting Vic’s demise!

18. Manpreet is horrified when Rishi reveals he’s got a new tattoo to demonstrate his undying love for her. Unable to lie any longer, Manpreet comes clean, revealing she doesn’t love him anymore!

19. Ellis and Priya set up the survival event together, and Paddy agrees to take part. Priya is giddy, and tells Manpreet how Ellis makes her feel.

20. Andrea suggests she and Charles go to the survival event in order to distract from Kim’s custody battle for Millie. Kim, meanwhile, is livid when she discovers Andrea has requested a restraining order, and therefore threatens to exact her revenge.

21. Timmy is flustered, and when Peri quizzes him on what’s wrong, he lies about a break-up, claiming that he’s now homeless. Peri, feeling sympathetic, agrees to let him stay the night at her house. But she soon grows suspicious, and Timmy’s lies start to unravel. Juliet comes to her ex’s rescue, bursting in through the door. The question is: will she and Peri be able to overpower unhinged Timmy?

22. Fergus offers Tony the job of managing The Dog. Tony is not interested. Diane, however, reckons that he should take the job, as her mind runs wild with the possibilities of what could happen if he doesn’t. Afterwards, Tony decides to accept Fergus’ offer and manage The Dog, and soon Fergus has another big offer for Tony!

23. Sienna lets slip about the existence of a mystery witness, who allegedly saw Brody’s murder. Warren decides to take action, and thus tucks a gun into his waistband and sets off. Sienna’s mystery eye-witness is later revealed to be none other than Donna-Marie! She meets with Sienna at the cafe, and trades in lunch for the witness statement.

24. Ripley’s stall appears to be on the up and up since their megaphone moment as Leah buys a dress. However, all is not what it seems, as Leah later reveals that Brooke offered her an item for free if she pretended to buy it.

25. Maxine confides in Trish about still having feelings for Warren. Fergus offers her advice, but accidentally pushes her right back into Warren’s arms! Warren has a change of heart about leaving after a talk with Maxine, but Fergus isn’t happy!