Coronation Street viewers have seen Yasmeen Nazir (played by Shelley King) remain the victim of controlling behaviour at the hands of her husband Geoff Metcalfe (Ian Bartholemew) as things have only got worse in recent months. Now, with Yasmeen gradually losing friends, it seems she could find an aid in Sally Metcalfe (Sally Dynevor) after a huge clue was dropped this evening.

Sally is one of Yasmeen’s few friends left in Weatherfield as a result of Geoff’s efforts to distance her from those who care about her.

Last week, Yasmeen snapped at close friend Cathy Matthews (Melanie Hill) as she continued to blame herself for Geoff’s behaviour.

An oblivious Cathy was left hurt by Yasmeen lashing out and it looked like she may have lost a friend in her for good.

However, it looks as though Sally may be the one to come to her aid in the near future after a huge clue was dropped tonight. 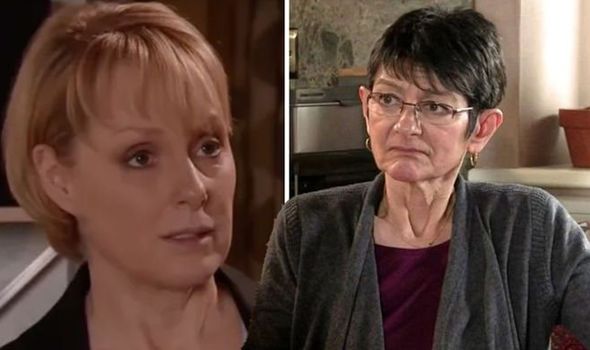 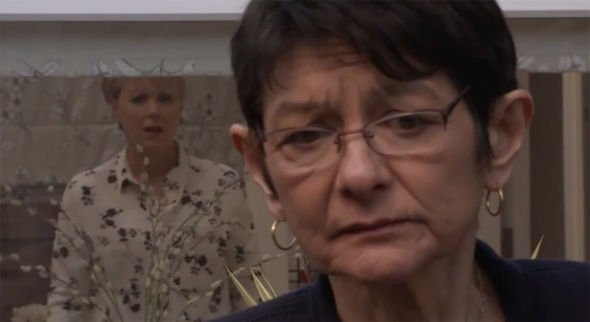 Fans of the ITV soap know the storyline – which has been going on for nearly a year – is set to reach its climax later this week.

Yasmeen will finally fight back against her abuser and attack him with a wine bottle when he embarrasses her once more.

Her granddaughter Alya (Sair Khan) has been encouraging Yasmeen to leave Geoff after she started to see first-hand his horrible behaviour towards her beloved grandmother.

Earlier this week, Yasmeen was left shocked when she was diagnosed with chlamydia and it didn’t take long for Geoff to blame her as a result. 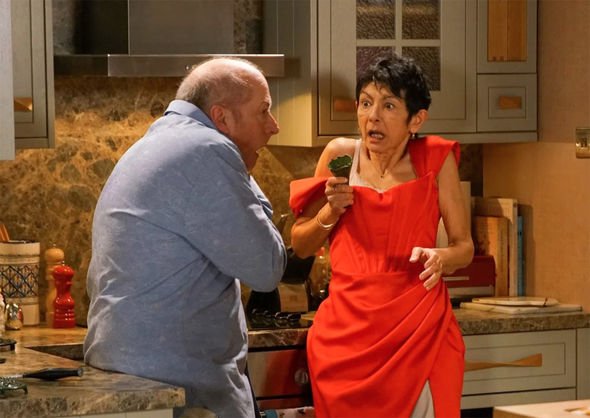 He has tried to convince his wife that he caught the STI from her, even though Yasmeen is aware of Geoff’s history with escorts.

Things took another nasty turn in the latest instalment as ITV viewers saw Geoff continue to spy on Yasmeen whilst he was out buying some groceries.

He caught his wife rummaging through a cupboard in the pair’s living room and realised she was up to something.

When he returned, it didn’t take long for Geoff to quiz Yasmeen on where his “special marinating bowl” was, knowing it had previously been in the same location.

Yasmeen informed him the cupboard was locked and she didn’t know where the key was and he soon made her confess she was hiding something.

He quizzed his wife further and she promised him it was just full of cleaning products but Geoff remained persistent.

Geoff found the keys in Yasmeen’s pocket and got to work trying to discover what she had been up to whilst he was out of the house.

He pulled out Yasmeen’s suitcase full of clothes, which she had ready whilst she deliberated when to leave her evil husband.

Yasmeen insisted the suitcase was still packed from Zeedan’s (Qasim Akhtar) wedding, which she was forced to miss when Geoff faked a heart attack.

Knowing Yasmeen wasn’t telling the truth, Geoff decided to set the contents of the suitcase on fire in the pair’s back garden, in a horrible revenge twist.

He locked Yasmeen in the house to make sure she couldn’t protest what Geoff was about to do – leaving her visibly distressed.

However, his daughter-in-law and next-door neighbour, Sally, witnessed the bonfire and complained to Geoff about the smell, adding: “If you weren’t Tim’s dad…” impinge she wouldn’t have been so kind if the circumstances were different.

Soon after, she saw Yasmeen in the garden looking despairingly at her burnt possessions as it looked as though Sally was perhaps clocking onto something being wrong.

With Yasmeen set to be charged for her attack on Geoff, will Sally decide to go against her husband and end up being a key force for good as things progress?

Could she pull out the suitcase as evidence of Geoff’s cruel and controlling ways?

If you have been affected by Yasmeen’s storyline, visit Women’s Aid here or ring the National Domestic Abuse Helpline on 0808 2000 247.