With so many entertainment options, it's easy to miss brilliant TV shows, movies and documentaries. Here are the ones to hit play on, or skip.

Olivia Colman has been enjoying a purple patch that has lasted half a decade already. From Broadchurch to Fleabag to her Golden Globe-winning turn in The Night Manager and her Oscar for The Favourite, she continues to produce brilliantly judged, emotionally authentic performances as enormously different women. And we haven't yet even had a proper look at her as the Queen in the forthcoming season of The Crown. 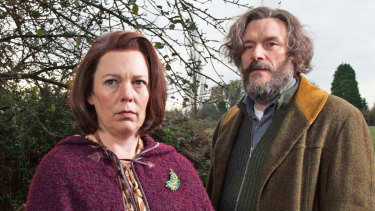 Olivia Colman quietly triumphs once again in Flowers, about an anxious woman and her deeply depressed husband (Julian Barrett).

The quality of Colman's performances is matched by the astuteness with which she chooses the projects in which she involves herself. In Flowers, a small but perfectly formed emotional freight train of a tar-black British comedy she found one that certainly won't be to everyone's tastes, but which will leave a lasting impact on those with which it resonates. 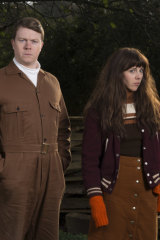 Colman plays one Deborah Flower, a middle-aged Englishwoman whose desperation and anxiety might be familiar but are the product of distinctly unusual circumstances. Deborah lives in a big but mossily dilapidated country house and remains barely married to her deeply depressed husband, Maurice (The Mighty Boosh's Julian Barratt), who writes books of deeply dark poetry for children. Those books are illustrated by Maurice's slightly bonkers Japanese artist-cum-manservant, Shun (series creator Will Sharpe).

It's all quite heightened – sometimes high into the realm of the surreal – but the emotional truths keep coming through like punches to the gut. At first Deborah is so desperate for male validation that she reacts giddily to sexual suggestion that is manifestly not forthcoming from her neighbour's builders. But across the six short episodes of the first season she proves anything but a one-dimensional needy case. As character arcs and roller-coasters go, Deborah's is one that demands an actor of Colman's versatility and gravid vulnerability.

The rest of the cast is similarly brilliant as Sharpe's scripts examine the cruel intractability of some people's depressions, and the limits of their loved ones when it comes to dealing with it. When Sharpe's own character suddenly takes centre stage it's a reminder of how often anglophone entertainment erases the inner lives of Asian characters. Tough telly but funny and true.

VHS cassettes aren't merely relics of a recently bygone era. As this exuberant, feature-length documentary shows, they represent a revolution in both art and commerce; they redefined pop-culture around the world; and they retain to this day countless creative works and daggy aerobics videos that have never been transferred to any other format. Oh, and for many American obsessives they also remain a way of life. Director Josh Johnson highlights the unprecedented creative boom the technology created. The video-rental stores that suddenly popped up everywhere had to fill their shelves with something, so anyone who could shoot their own weird, low-budget video could not only get it to the public but have it physically sitting alongside major-studio films. Naturally enough, Johnson interviews movie-makers like Frank Henenlotter (Basket Case) and Lloyd Kaufman (The Toxic Avenger) who did well out of the format. But there are also others for whom the pause and rewind buttons provided a film school at home; artists who made a living painting box covers for crummy movies; and lots of seriously dedicated modern-day collectors. Marvellous.

Surely nobody in the world wakes up happier each day than AC/DC singer Brian Johnson. Every time you see him he's erupting into cackles and getting up to verbal mischief in his wrought-iron Geordie accent. This terrific little series has Johnson meeting other old rockers on their home turf for leisurely, reflective chats about lives spent in rock'n'roll. The first episode, with The Who's Roger Daltrey, is an absolute ripper. Others include Robert Plant, Joe Elliott, Nick Mason and Lars Ulrich. 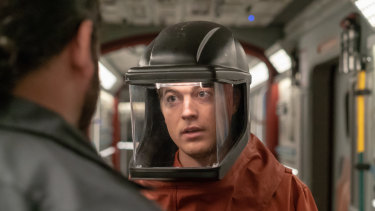 Lame: Another Life should have been left in space.

In space no one can hear you stink. Another Life starts out OK: a huge alien artifact lands on Earth, and astronaut Niko (Battlestar Galactica's Katee Sackhoff) has to lead a mission to the star it came from to find out what E.T. wants from us. Turns out that the US Space Force has done away with uniforms, so Niko's surly young crew can wear whatever nonsense they want. Niko is also going to have to bust some actual kung-fu moves on her mutinous deputy. Selma Blair plays a social-media monster. Lame. 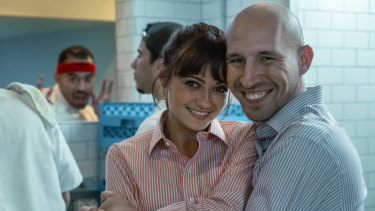 Midwestern mogwai Tess (Ella Purnell) continues her flibbertigibbet odyssey through the incoherent world of the high-end restaurant business in Manhattan. The place at which she's a waitress is meant to be run like a military operation in which any slip will result in you having your throat cut by uptight boss Howard (Paul Sparks, looking like a serial-killer Greg Proops), but everyone still has loads of time to play out their own petty dramas right in the middle of service. Sandra Bernhard wastes her own time appearing in Monday's episode.

The great man himself isn't actually in Tasmania, but his authoritative voice adds to the imprimatur that natural selection has already bestowed upon the island's wonderful wildlife. There are big, fat platypuses that dwarf their mainland cousins and look like little crocodiles as they waddle insouciantly across the landscape. There are trees that grow 100 metres tall because bushfires are so rare. Most mind-boggling, perhaps, are the jumping ants who cover their nests with dark stones in winter and white ones in summer.

*Stan is owned by Nine, the publisher of this website.