Simon Cowell, 59, headed the Britain’s Got Talent panel once more last night as the third edition of The Champions special continued with more stand out acts from across the world performing for two coveted spots in the grand finale. As the ITV talent show got underway, the franchise creator had a word with hosts Ant and Dec, both 43, about how he wanted them to approach the running order to avoid revealing any “spoilers”.

Although the episodes are pre-recorded, Simon was still welcomed onto the stage alongside fellow judges Amanda Holden, 48, Alesha Dixon, 40, and David Walliams, 48.

Taking their seats and before the performances began, Ant and Dec took the opportunity to ask the judges what they were expecting to see.

Simon told the hosts: “I genuinely do not have a clue who’s on each night, so I love it,” with the rest of the panel in agreement.

Before the presenters could move on however, the music mogul jokingly hit back at the hosts for not only informing the audience who was taking to the stage, but also him and his fellow judges. 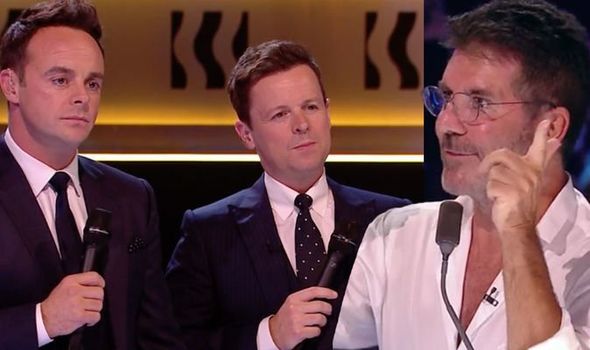 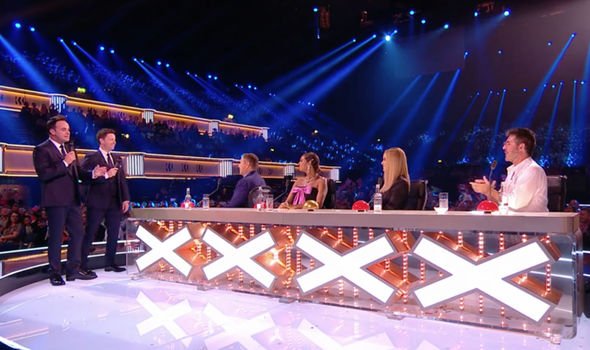 “Try not to give it away in the breaks because you keep saying who’s coming up and that spoils it,” the judge remarked.

Replying to Simon’s demands, Ant told the franchise creator: “That is our job,” with the audiences in stitches at the interaction between the trio.

“What we’re going to do, we’ll nod at you and you put your fingers in your ears,” Dec quipped to Simon to avoid revealing any spoilers, with the judge in agreement.

As the show pressed on, it was David who had the chance to secure a Golden Buzzer act who would go straight through to the final, with Amanda and the hosts already selection their’s in the two weeks previous. 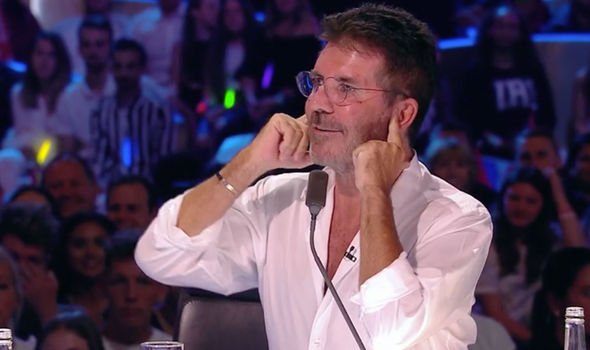 David decided to put through dancing pensioner Paddy and her professional partner Nicko after they failed to land success when they performed on Britain’s Got Talent back in 2014.

Commending the pair after their impressive salsa routine, David said: “There are very few acts you can watch with a smile on your face and tears in your eyes.

“This is one of the most joyous, most beautiful, most life-affirming acts we’ve ever had on Britain’s Got Talent.

“So let’s not mess about. Let’s do this for everybody here,” the judge continued as he rushed to press the Golden Buzzer.

Viewers watching at home weren’t too pleased however, as 2016 champion Richard Jones was sent home after his emotional performance.

The main act performer paid tribute to war veteran Fergus Anckorn, who has passed away since he joined Richard during his spell-bounding act in the 2016 final.

Taking to Twitter, one viewer posted: “@richjonesmagic you should’ve won infact you should’ve got the golden buzzer #Respect #BGT.”

Another added: “What the hell is that result! Richard should be through! What rubbish! #BGTTheChampions #BGT.”

A third remarked: “Golden buzzer to the wrong ones now the best act didn’t get through. Seriously #bgtchampions.”

Richard was beaten to the last spot for the final by illusionist Darcy Oake, who first appeared on the British franchise in 2014.

This is the third time a winner of Britain’s Got Talent has progressed in The Champions series as Paul Potts, 48, and Lost Voice Guy have been knocked out in the previous two weeks.

Britain’s Got Talent: The Champions continues Saturday at 8.30pm on ITV.