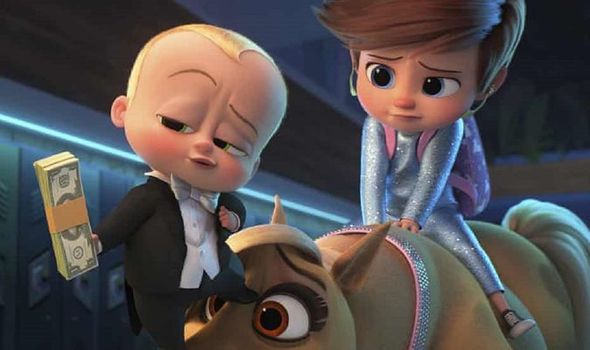 It’s the second family animation about a talking baby. Apparently, enough kids enjoyed the 2017 original, where seven-year-old Tim learned his baby brother was a secret agent who was working for an interdimensional baby-making company that was waging a secret war with puppies. At the time I wondered about the drug-testing policy at DreamWorks’ HQ.

Now I’m pondering the effects of lockdown on the mental health of homeworking animators. After this, Dune feels like a gritty, kitchen-sink drama.

When we catch up with Tim (voiced by James Marsden), he’s somehow grown into a middle-aged man and is a stay-at-home dad to two daughters.

Tim has lost contact with his little brother Ted (Alec Baldwin), who is now a grown-up businessman. Then one night, he discovers his baby daughter Tina in a pin-striped suit.

She tells him (in the adult voice of Amy Sedaris) that she works for BabyCorp, and tasks him with infiltrating the school attended by his older daughter Tabitha (Ariana Greenblatt).

Tim will have to team up again with Ted. To fit in, they must swig an age-reducing potion that will make them look like the kid and baby from the first film.

Crazy things have happened in children’s films before, but usually the scenes obey some form of narrative logic. This one makes no attempt to explain its characters or justify surreal sequences involving sentient alarm clocks and baby ninjas.

The frenetic pace and a smattering of half-decent sight gags should keep smaller children in their seats. Sadly, it is too busy and too noisy to allow sleepdeprived parents to sneak a well-deserved kip.