Urbanworld Film Festival 2019: There’s a provocative tale to be told about the balance of being both black and a police officer, but this movie doesn’t feel like telling it 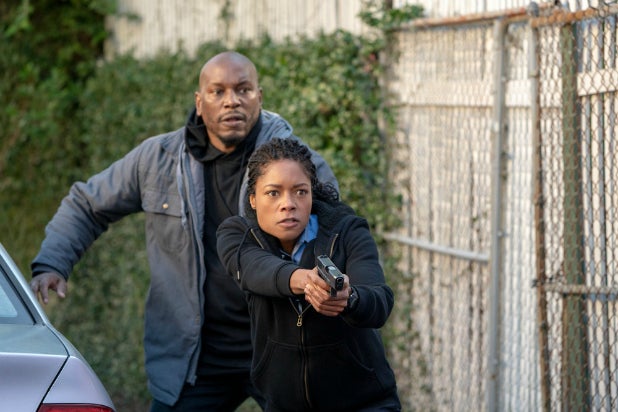 It’s kind of funny that, just a few years ago, Frank Grillo was in “The Purge: Anarchy,” in which he struggled to survive the night against morally corrupt civilians with a 12-hour license to kill, and now he’s playing a cop tripping off a limitless authority to murder in “Black and Blue.” It’s this same professional-pedestrian throughline to violence that is a major theme in this prosaic police drama from director Deon Taylor (“The Intruder”).

Corrupt cop narratives aren’t exactly fresh on screen, and Taylor’s film doesn’t bother to shy away from blatant callbacks to other more innovative entries in the genre. For instance, composer Geoff Zanelli (“Traffik”) uses a piece from the thunderous “Sicario” score, while Taylor and screenwriter Peter A. Dowling (“Flightplan”) borrow from the classic bloody bathtub scene from “Training Day.”

But Taylor tries to do the now-inevitable filmmaker exercise of infusing “Black and Blue” with #BlackLivesMatter themes. Opening the film with officer Alicia West (Naomie Harris) getting pulled over and thrown against a fence by white cops for looking like one of their so-called suspects, Taylor brings us into a narrative that underscores the fact a police badge doesn’t preclude a black person from being profiled and criminalized.

What is interesting, though, is how the film shows the complexity of black cops navigating a police force known to be corrupt and racist. On the one hand, there is Darius (James Moses Black, “This Is Us”), a seasoned cop who interlocks himself with some of the most nefarious members of the squad. Among them is Grillo’s trigger-happy Malone, a narc who’s masterminded a never-fully-explained scheme that culminates with his murder of a young black drug dealer. Whether Malone and his team were robbing the dope peddler or stealing his drugs remains a mystery.

But then there’s Alicia, a rookie cop who later reveals that she joined the force “to make a difference,” which sounds naïve in today’s era, because we forget that that’s supposed to be the objective of law enforcement. Because of her allegiance to the “blue” team, however, she’s seen as a traitor to her black neighborhood and friends, including Mouse (Tyrese Gibson) and Missy (Nafessa Williams, “Black Lightning”). Alicia tries to straddle both worlds, but it isn’t until her body camera records Malone executing the young black man that she finds herself aligning with her estranged black kinship to protect herself from her crooked team members, who are ravaging the neighborhood looking to kill her and steal the footage.

Then in another corner of the story is Darius (Mike Colter, “Luke Cage”), a criminal lord and uncle of the deceased young man who’s in cahoots with Malone’s operation and quick to take his word that it was actually Alicia who killed his nephew. All of a sudden, Alicia is not only on the lam from the cops but also from Darius and, by extension, the impoverished black neighborhood he runs.

Dowling’s screenplay could have used a whole lot more exposition, especially about Darius and Missy, who mostly serve as peripheral characters to a story that is really about Alicia grappling with what it means to be black and a member of law enforcement. What is Darius getting out of his relationship with Malone other than, presumably, immunity? Is he just a sheep or does he get off on criminalizing black people too? We know Alicia becoming a cop put a rift between her and Missy and Mouse, but why did she move out of their neighborhood, widening their divide?

Without those answers and more nuanced commentary, “Black and Blue” hinges on hackneyed corrupt-cop drama tropes that pay homage to older, better movies. Malone’s macho declaration that he has jurisdiction over Darius’ neighborhood tries and fails to resonate as much as Denzel Washington’s epic “King Kong” scene in “Training Day.”

Harris, as usual, delivers a solid performance in a movie that is ultimately not up to her level, while the supporting performances are adequately committed to a film that has potential but ends up being a basic procedural drama with little of substance to say about the way blackness functions in the relationship between the police department and the streets. And because much of the surrounding characterization — including Alicia’s partner (Reid Scott, “Veep”) — is underdeveloped, it makes some of the moral decisions made in the film that much more perplexing.

“Black and Blue” is chock-full of heart-pounding car chases and suspenseful moments that are certain to entertain mainstream audiences, but for a film that suggests even in its title that it reflects a necessary and under-discussed conversation, it falters quite tremendously.