We have a full recap that readers can take a look at, but we can also summarize it by stating that Tyler Crispen got evicted. It was a unanimous vote and he now heads to join the BB22 jury.

Tyler has/had a lot of fans rooting for him this season, including host Julie Chen Moonves, who thought that this was the season that Tyler could end up a Big Brother winner.

This was the end of the road for him, though, and now the final five houseguests will play on without him.

And speaking of the BB22 jury, two segments were dedicated to showing the first five people arriving at the jury house. It might have been the best part of the episode, but it also showed a lot of bitterness coming from Daniele Donato.

Below are some of the Twitter posts that former houseguests made during and after Episode 28 aired. Some of them have been quite interesting to read.

This one was posted by Janelle Pierzina after she watched the episode and wanted to root for someone to win the next Head of Household Competition. She quickly received responses from Bayleigh Dayton from this season and from GinaMarie Zimmerman and Andy Herren from Big Brother 15. 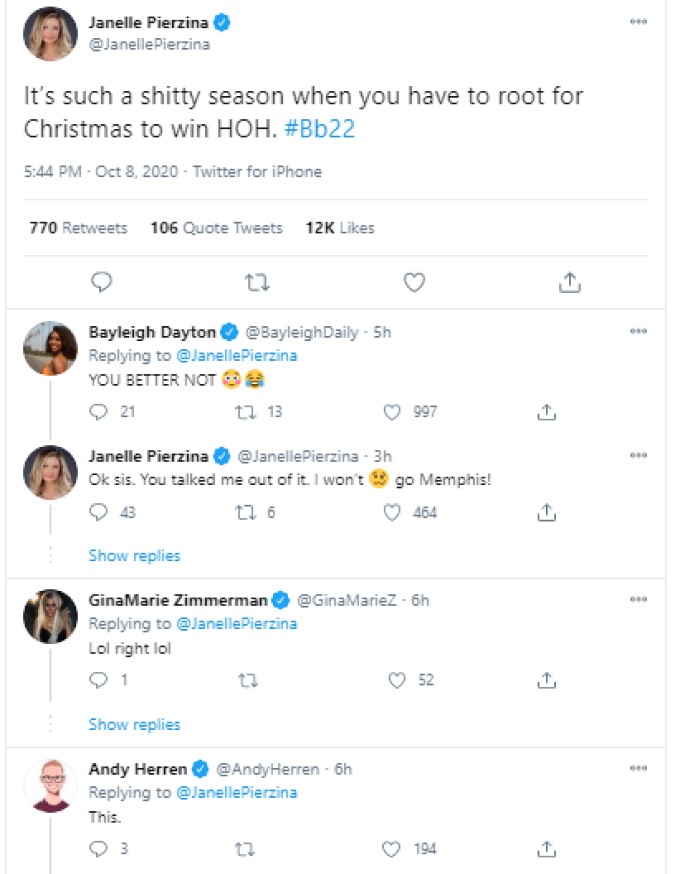 Nicole Anthony from BB21 and BB22 also weighed in with some brief thoughts. She will share more on her podcast.

Christine Varner from Big Brother 16 retweeted a post that Andy Herren made about the extensive jury segments from the episode.

Quite a few former houseguests have also made posts about who won the HOH Competition late last night. Be prepared to encounter some spoilers if you read on from this point.

Here is a video clip that Paulie Calafiore from BB18 posted which also features his brother (Cody Calafiore). It is intended to celebrate the fact that Nicole Franzel just won HOH.

And in case you were wondering how Big Brother 8 winner Evel Dick Donato feels about the new HOH, check out his post on Twitter:

Now that Nicole is in charge of the house, she will be making her nominations for eviction. She has two targets in mind already.