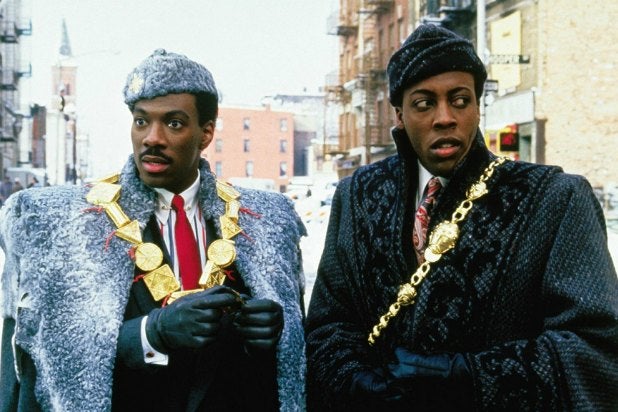 Amazon Studios is in talks to acquire Eddie Murphy’s “Coming 2 America” from Paramount, according to multiple reports. The sequel to the 1988 hit comedy is said to be purchased by the streamer for around $125 million and will be released on December 18.

The film would be the latest to be sold by Paramount to a streaming service as the studio has offloaded several titles in response to the COVID-19 pandemic. Previous films sold by Paramount include Aaron Sorkin’s “The Trial of the Chicago 7,” which was originally meant for wide theatrical release by Paramount this month but was instead sold to Netflix for a reported $56 million. The true story drama, expected to be an Oscar contender, will be released on Netflix this Friday.

The original “Coming to America” was directed by John Landis and follows Prince Akeem (Murphy), who travels from Africa to Queens to escape an arranged marriage and find a wife who would love him, in spite of his royal title. Arsenio Hall, James Earl Jones, Shari Headley and John Amos also starred, with Hall playing his loyal right hand.

The sequel sees Akeem prepare to ascend to the throne, only to discover that he has a long-lost son named Lavelle who lives in Queens. To respect his father’s dying wish, Akeem returns to America to find Lavelle and groom him as the new crown prince. The original cast returns for the sequel with Jermaine Fowler joining the cast as Lavelle, along with Leslie Jones as Lavelle’s mother. Craig Brewer is directing.

The sale was first reported by Variety.